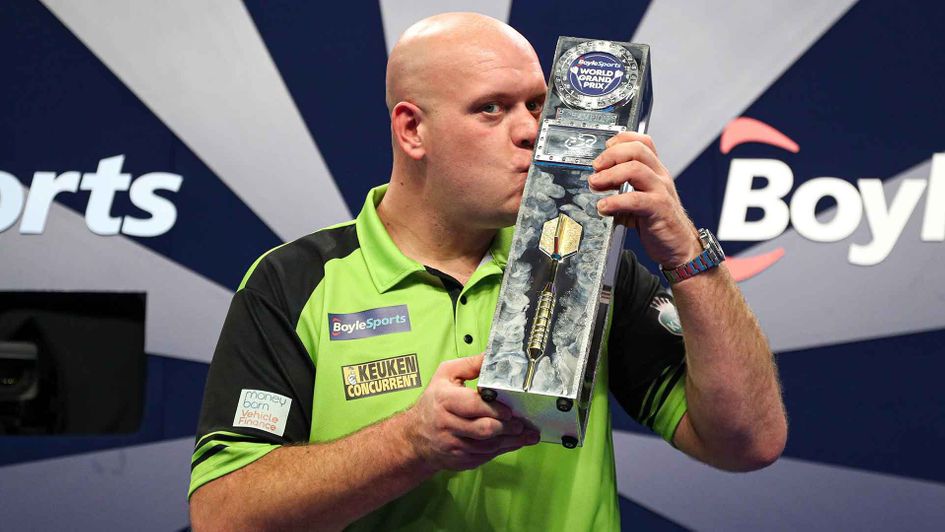 Michael van Gerwen is the World Grand Prix champion for a sixth time after defeating Nathan Aspinall 5-3 in a memorable final at Leicester's Morningside Arena.

The Dutchman appeared to be coasting towards what would have been just the second whitewash in a World Grand Prix final when leading 4-0 in sets and averaging close to 100 but his opponent used his trademark fighting spirit to end MVG's hopes of emulating Phil Taylor's 6-0 triumph over Dave Chisnall back in 2013.

One set quickly turned into a second and by the time Aspinall got a his third on the board - all by 3-1 scorelines - van Gerwen's title odds had drifted dramatically from 1/500 to just 1/6 as pressure continued to build.

🏆🎯 Michael van Gerwen is the World Grand Prix champion for a SIXTH time!

😅 He led 4-0 but had to survive a phenomenal comeback from Nathan Aspinall to win 5-3!

Roared on by the vast majority of the crowd, the Stockport thrower looked as though he'd run out of gas when falling 2-0 down in the eighth set but again he pulled himself from off the canvas to win the next two and force a deciding leg.

Aspinall reached a finish first but spurned darts at double tops and double 10 before MVG finally dragged himself over the line to win his third major of the season and a cheque for £120,000.

"For me to have this trophy back feels amazing," said Van Gerwen, who has also won the Premier League and World Matchplay this season. "It's great to have this tournament back in my hands but I had to battle for it really hard.

"When a guy like Nathan puts his relaxed mode on he can play some phenomenal darts but I'm glad I won this one. It was a tough one. I wasn't panicking at all - I think I did all the damage early doors. I think this was great for darts - I was 4-0 up and Nathan never gave up, he kept battling."

Van Gerwen was also full of praise for Aspinall's return from a serious wrist injury which kept him sidelined for six weeks at the start of 2022.

"Nathan has been struggling with such a bad injury on his arm, he's been a credit to sport in the last year," added the Dutchman, who ended up with a slightly lower average of 91.07 compared to Aspinall's 91.88, won just two legs more overall with 18 and hit three fewer 180s with six. "He battled back and I think that is the difference between a winner and a loser, and I think he was a winner tonight."

Aspinall paid tribute to Van Gerwen's triumph, saying: "This week, Michael has been amazing - he's back to his best and he's been the deserved winner of this tournament.

"He's been phenomenal all week but I never gave in. It's another final and I'm very happy."

Love the sportsmanship and smiles between Michael van Gerwen and Nathan Aspinall at the end of an incredible final. MVG the champ but the Asp is the moral winner. What a fighter.pic.twitter.com/ZTkTeMhv9z

Sky Bet latest odds: Michael van Gerwen was 1/500 at 4-0 up but now he's 1/6! Aspinall is just 7/2 to pull off arguably the greatest comeback in a major final. Click here now for all the Sky Bet live darts markets including most 180s & highest checkout.

'The Asp' gets another three and he does hit D5 to move one-set away from levelling this final up! 😱 pic.twitter.com/nbhPAvtNRD

Is he starting to believe?!

From 4-0 down, Aspinall reels off two sets on the spin and he's back in this final!#WGPDarts | Final
📺 https://t.co/Pwq3CpuTps pic.twitter.com/0bTWGfbHE6

Sky Bet latest odds: If anyone can produce an epic comeback it's Aspinall but the most lively betting race is who will hit 180s. The Asp is 1/6 and MVG is 13/2. Click here now for all the Sky Bet live darts markets including most 180s & highest checkout.

A huge smile on the face of Nathan Aspinall who avoids a whitewash defeat, keeping this final alive and reducing the deficit to three sets!#WGPDarts | Final
📺 https://t.co/Pwq3CpdQns pic.twitter.com/5grAEhJ6JK

Sky Bet latest odds: It's pretty much all over now with MVG 1/500 for glory and Aspinall way out at 33/1. Click here now for all the Sky Bet live darts markets including most 180s & highest checkout.

MvG A SET AWAY!

This is masterful from MvG, clinching the fourth set as the Dutchman moves to the brink of a sixth World Grand Prix title...

With Aspinall sat on 28 for a break, Van Gerwen finds D16 for a big 112 finish and he leads in the third set!#WGPDarts | Final
📺 https://t.co/Pwq3CpuTps pic.twitter.com/Kc1zfOch1O

Sky Bet latest odds: MVG is now 1/16 favourite to triumph while Nathan Aspinall is 7/1 to launch an incredible comeback good enough to lift the trophy. He's not playing badly though, far from it. Click here now for all the Sky Bet live darts markets including most 180s & highest checkout.

Sky Bet latest odds: MVG is now hot 1/7 favourite to win his sixth World Grand Prix title while Nathan Aspinall is 4/1 to bounce back from this early setback and lift this trophy for the first time. Still a long way to go. Click here now for all the Sky Bet live darts markets including most 180s & highest checkout.

The Dutchman is off to a GREAT start as he chases his 6th World Grand Prix title 👌 pic.twitter.com/il2EYQMDGr

The dream start to this final for Van Gerwen, pinning D18 for a big 116 checkout and he takes the opening leg on throw!#WGPDarts | Final
📺 https://t.co/Pwq3CpuTps pic.twitter.com/Y85MZcKw7D

1945: The players are now making their way out to the stage so let the drama begin...

1940: You probably have time to skim ready by big final preview by clicking here but to save you time I've gone for a 5-2 scoreline in MVG's favour and have also picked out these three tips.

1930: With time running out before the final, let's quickly run through the overall tournament stats...

It's hard enough averaging over 90 for one match of double-start darts - even in the first round - so for Michael van Gerwen to be at 93 after 15 sets across his four matches shows just how dominant he's been this week.

He only dipped fractionally below 90 once in a 2-0 win over Gary Anderson while he came agonisingly close to posting his fifth World Grand Prix 100+ average ever during an absolute masterclass against Chris Dobey.

The way his confidence is growing, I wouldn't be that surprised if he can post 100+ in a World Grand Prix final for the second time in his career having last emulated Phil Taylor's historic feat in the 2016 edition, when winning his third of five titles.

The real key to all this has been his doubling at both ends of the leg - but particularly at the start. His double-in percentage of 46% is far superior to Nathan Aspinall's 38.24% and if there's a big discrepancy on that metric tonight then it could well be one-way traffic.

Van Gerwen is also winning almost a quarter of legs with a 100+ checkout, which, if you think about it, is crazy. He's currently doing it at 13.04% for the whole of 2022 and that's considered very high.

Aspinall may not be averaging close to MVG but his checkout stats are more clinical overall and he's demonstrated that impressive in his last two matches, managing 52% against Martin Lukeman and 56% against a wasteful Gerwyn Price, who was punished for all his mistakes. Will he get enough tonight?

1920: So how did both players reach the World Grand Prix final? Let's start with Nathan Aspinall...

After coming through a poor opener against an equally sloppy Michael Smith, the Asp had to survive four match darts against Danny Noppert to squeeze through as the underdog once again. He came back from 2-0 down in sets and then 2-0 down in the deciding set as his fighting spirit was rewarded once again.

Aspinall then came through a hard-fought contest with Martin Lukeman 3-2 despite averaging 10 points more than his opponent with 90, once again backing up his own words that he never wins easily and never loses easily.

Bizarrely his semi-final with Gerwyn Price turned out to be his 'easiest' win as he punished the top seed for missing 29 of his 41 attempts at doubles with his highly clinical finishing.

Just look at the emotion on the face of Nathan Aspinall who secures a spot in the final of the World Grand Prix, defeating top seed Gerwyn Price 4-2 in a truly dramatic encounter!

As for Michael van Gerwen's route...

If it wasn't for a mid-match blip against Stephen Bunting, his journey to the final would have looked like an absolute procession.

Having dropping just a couple of legs against Gary Anderson, MVG looked to be storming into the quarter-finals when winning seven legs on the trot to move 1-0 up against the Bullet in the fourth set, and was averaging over 10 points more at that point.

Set play can create drama out of nowhere and so it proved again, but after surviving the scares of a deciding set, he produced an exhibition of high scoring and ruthless doubling - at both ends of legs - to beat Chris Dobey in a highly-entertaining contest.

He was very impressive again when stepping up against his old rival Peter Wright but sadly Snakebite didn't turn up to create a classic and the 4-0 scoreline was maybe more down to his lack of Aspinall-style spirit.

🐍 Almost a Wright-wash as MVG demolishes Snakebite 4-0, winning 12 of 13 legs

1910: Right, let's kick things off the head-to-head record between the pair. Although MVG has the upper hand as you'd expect, most of their battles have been close and that's no surprise given Nathan Aspinall's qualities as well as his fighting spirit. He's not afraid of anyone.

He also gave him a real run for his money at this year's World Matchplay quarter-finals when many had expected a wider margin of victory than 16-14, while their previous meeting before that was a classic European Championship semi-final that went to a deciding leg.

👏 What a tremendous finish to an incredible night at the World Matchplay.

👌 With the crowd on his back, Michael van Gerwen produces a 146 checkout to defy Nathan Aspinall's stirring comeback.@MvG180 pic.twitter.com/CPHsLtCptv

Aspinall won't throw in the towel if he finds himself in what seems to be perilous position so I would be surprised to see him nick a couple of sets or three.

1900: Good evening and welcome to our live blog of the Boylesports World Grand Prix final, as Michael van Gerwen bids to win this double-start major for the sixth time in his seventh final and Nathan Aspinall chases his first having never reached this stage before.

MVG is already the second most successful player in the tournament's 25-year history behind Phil Taylor, who lifted this trophy 11 times, but it will have felt like three long years for him since he thrashed Dave Chisnall for his fifth back in 2019.

The Dutchman endured a rocky patch in his otherwise phenomenal career in 2020 and 2021 but he's been firmly re-exerting his authority in the world of darts this year by landing eight titles including the Premier League and World Matchplay, so another major tonight will send out another ominous warning to his big rivals that he's returning to his dominance of old.

He dispensed with one of those arch rivals last night in the shape of Peter Wright, who crumbled to a 4-0 defeat, while the other - Gerwyn Price - was punished for every mistake in his semi-final by Aspinall.

It'll take a herculean effort from the Stockport man to spring another surprise tonight - especially if MVG plays like he has been doing this week - but nobody battles harder and he won't give up until the final double has landed.

The final begins at around 1945 BST so between now and then we'll run through the routes to the final, tournament statistics, head-to-head records and some predictions.

Before we get into the present, here is quick look at the previous finals in the tournament history...