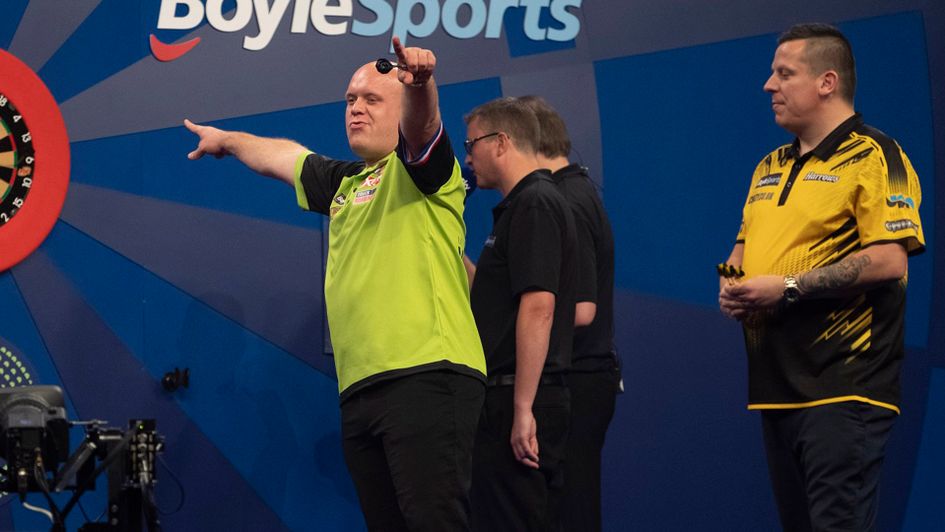 A leg-by-leg report and highlights from the Boylesports World Grand Prix final as Michael van Gerwen beat Dave Chisnall 5-2 to win the title for a fifth time.

Michael van Gerwen once again has a major trophy in his hands as he bags his fifth World Grand Prix title and his 36 individual major of a truly astonishing career that knows no boundaries.

In total he now has 50 televised crowns if you include his three World Cups for Netherlands while his overall career tally of PDC tournament triumphs reaches 127!

After lifting the trophy yet again and pocketing £110,000, the Dutchman said: "It means a lot to me and I'm really pleased with this victory. It's been a phenomenal week for me and I played really well, and it was a really good performance in the final because Dave put me under pressure. This was some of the best darts I've seen from Dave and he never gave in.

"He had a great tournament and he played really well and pushed me, but every time in the important moments I did the right thing - and I think going 3-1 up was a big moment. I feel good and I want to keep this form going now into the big tournaments we have coming up."

But it's more heartbreak for Dave Chisnall who remains one of the best players never to have won a major after a fifth defeat in a final although he must take a lot of heart from a superb performance to end a wonderful week that proved he's a big-time player once again.

There's no way anyone can say he bottled it - he played to as high a standard as he's done all week and his 12 maximums helped him average an impressive 93.32.

Chisnall said: "It's been a positive week and I've played well so I'm proud. When you go 4-1 down against Michael van Gerwen it's going to be tough but I never gave in.

"It was a game of fine margins and I missed crucial doubles in a couple of legs, but that's darts. He punished me and it's my own fault, but I will work on it.

"I've had a great tournament and the atmosphere during the final was fantastic, the crowd gave us both great support. I did better than in 2013 and I'm proud of myself."

His display tonight would probably have been enough to beat anyone else but ultimately he found MVG in rampant mood, just like in nearly all of their previous 59 contests.

The three-time world champion has now defeated Chizzy 48 times while the St Helens man's winless run now extends to 27 games, with his best result in that time being a Premier League draw. His only victory over him in 31 televised meetings is the 2013 World Grand Prix.

💛👏 Dave Chisnall remains one of the best players never to win a major but played is part in a terrific final.pic.twitter.com/4Qrg1GXs1o

Sky Bet latest odds: MVG is now 1/200 to get the one set he needs for victory while Dave Chisnall is well out to 25/1 to pull off a huge comeback. Click here now for all the Sky Bet live darts markets including most 180s & highest checkout.

Van Gerwen enters a 4-1 lead and is now just one set away from retaining the World Grand Prix title. pic.twitter.com/mIkzRaD5tL

Sky Bet latest odds: MVG is now 1/50 to win his fifth World Grand Prix while Dave Chisnall is well out to 14/1 to claim his first. Click here now for all the Sky Bet live darts markets including most 180s & highest checkout.

MVG IS IN THE DRIVING SEAT!

Van Gerwen extends his lead to a two set advantage, with a 104.58 set average in yet another deciding leg.

What a final we have here tonight! pic.twitter.com/K5dFBV3HoB

Seven perfect darts from Chisnall helps him on his way to opening his account in the fourth set.

Will we see that magical nine-darter tonight? pic.twitter.com/ighhLmjbNE

Van Gerwen reclaims the lead after a deciding leg in the third set is rounded off with a fantastic 111 finish... pic.twitter.com/0Kjpy6hxGd

Sky Bet latest odds: MVG is still favourite but his odds have drifted slightly to 1/5 while the fast improving Chizzy is 7/2 from 5/1. Click here now for all the Sky Bet live darts markets including most 180s & highest checkout.

👏🎯 We have a final on our hands at the World Grand Prix as Dave Chisnall wins the second set against MVG!

🏆 Can he kick on and lift his first major title?pic.twitter.com/75eI7Z7O2m

Sky Bet latest odds: MVG is hot favourite now at 1/8 after that first set while Dave Chisnall is out to 5/1 to bag his first major title,. Click here now for all the Sky Bet live darts markets including most 180s & highest checkout.

The world number one wraps up the first set in quick succession with a 3-0 whitewash set to kick off the final! pic.twitter.com/uSgFHaqMri

2010: The wait is nearly over as the players make their way to the stage at the Citywest Convention Centre.

IT'S TIME FOR THE FINAL!

It's Dave Chisnall's second time in the World Grand Prix final and tonight he faces up against Michael van Gerwen! pic.twitter.com/5nfuL7CAaP

WHAT AN ATMOSPHERE IN THE CITYWEST!

Things are hotting up here in Dublin as Michael van Gerwen walks onto the stage for a SIXTH World Grand Prix Final...

Will he make it World Grand Prix title No.5? pic.twitter.com/jHeYekfG3r

1955: So who are you backing to lift the prestigious trophy tonight? Will it be MVG's 36th PDC major or Chizzy's first? Obviously I'm rooting for Chisnall having tipped him at 50/1 each-way pre-tournament but I've tried to put that bias to one side in my preview of tonight's final. Click here to read my prediction.

1915: Finally, before we take a break before the players get on the oche at the Citywest Convention Centre around 8pm, let's take a look at the head-to-head record, which is pretty grim for Dave Chisnall fans.

We've already mentioned how Van Gerwen is the man responsible for beating him in two of his four major finals at the 2016 Masters (11-6) and 2016 Players Championship Finals (11-3), but at least Chizzy has a crumb of comfort knowing that his only televised victory over the Dutchman came here on this stage at the 2013 World Grand Prix quarter-final.

Worryingly, his last win of any kind game back in February 2016. They have played 26 times since then, with Chisnall's best result being a draw.

And the less said about their record on TV - which includes all majors, Premier League meetings and those World Series of Darts tournaments around the world - the better!

1850: For those of you who love the stats, these might make interesting reading from this year's World Grand Prix. Michael van Gerwen's are listed on the left...

As you can see, the averages are pretty similar and both have managed 90+ in three of their four matches which highlights how their scoring consistency - as well as their clinical finishing at the end of legs - has somewhat overcome any difficulties getting away. Not that they've overly struggled in that area of the game, although MVG has fared better than Chizzy, who ruined the overall look of his double-in stats against Durrant with seven visits of no scoring.

Chizzy has been playing brilliantly all week and if anything it's been his opponents suffering from jitters at the key moments rather than himself. After somewhat undeservedly dragging himself into a situation when he was throwing for the match, Gerwyn Price failed in three visits to get away as he gifted the deciding leg to Chisnall in round one while Stephen Bunting was never at the races in the St Helens derby and Nathan Aspinall was unable to apply pressure in a fourth set having punished him for two missed match darts in the third. Chizzy then held his nerve in three successive deciding legs to defeat three-time BDO world champion Glen Durrant last night, with the help of a 170 checkout.

🎯🎣 The novelty of the 170 checkout is starting to wear off now as Dave Chisnall hits the third in two nights! pic.twitter.com/m6CyPaeyYl

1830: Let's take a look at how both players got here, starting with Michael van Gerwen. Just click on the round if you want to read a report from the night to refresh your mind on what happened...

The defending champion could so easily have fallen at the first hurdle for the second time in three years against the dangerous Jamie Hughes but after surviving that test in three sets, he overcame two players who had shocked him at majors over the past couple of seasons. He demolished Jeffrey de Zwaan 3-0 in the second round before edging out Mervyn King in a thrilling quarter-final which saw both players hit 170 checkouts. In the last four he was far too strong for Chris Dobey, who spurned a some crucial darts in his first appearance in a major semi-final.

1820: Before getting onto the routes to the finals, here's a look at both players' title hauls...

1815: Good evening and welcome to our live blog from what could be a highly emotional finale of what has typically been another dramatic week of World Grand Prix darts.

In one corner we have the defending champion Michael van Gerwen, who is chasing a fifth Dublin crown and a 36th individual major trophy of a truly astonishing career.

In the other is a resurgent, 'new' Dave Chisnall, who goes in search of his maiden major title in his fifth final and second in Dublin, six long years after his first.

His other two televised finals, though not counted as 'majors', also resulted in heavy defeats to MVG - 11-4 in the 2016 Perth Darts Masters and 8-0 in the 2017 Shanghai Darts Masters - so success tonight would come has a huge crowd-pleasing moment.

No darts fan around the world would deny Chizzy deserves a big trophy to compliment a career that has entertained us so much down the years while anyone who followed my pre-tournament tips has additional reason to root for the St Helens man considering he was backed at 50/1 each way!

But he'll obviously have to upset the odds to do so.

World champion van Gerwen has won 10 PDC titles since lifting his third Ally Pally trophy at the start of 2019, including the televised Masters, Premier League, Melbourne Masters and New Zealand Masters, so another big one to kick start the winter of majors will silence those critics who dared to doubt his dominance.

Over the coming updates I'll look back on their routes to the final, asses their tournament stats, head-to-head records and offer some predictions.

But first here's a list of the previous World Grand Prix finals which may rekindle some old memories...