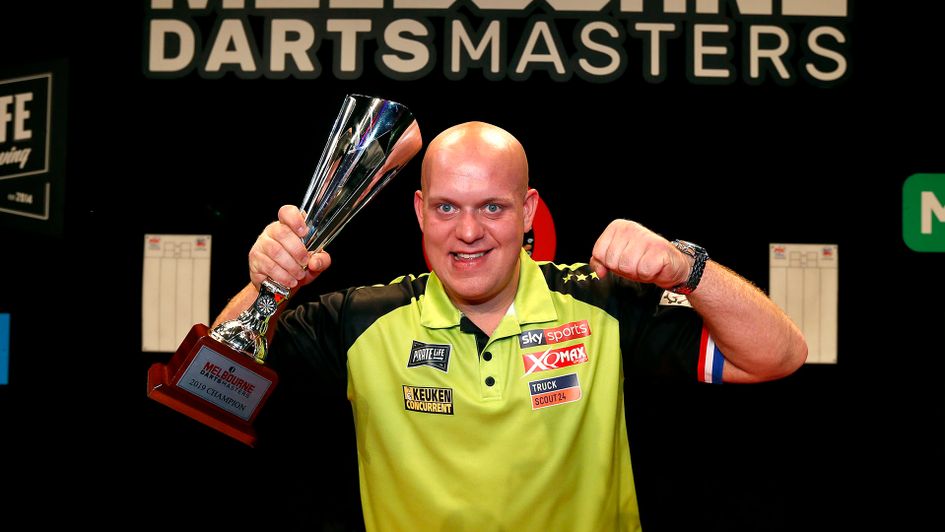 Michael Van Gerwen looked close to his best in the concluding rounds of the Melbourne Darts Masters as he beat Gary Anderson, Peter Wright and Daryl Gurney to claim the title.

Despite being pre-tournament favourite - albeit at a relatively big 7/4 compared to what he's usually gone off at during his long era of dominance - the Dutchman has been struggling to find his best form in recent months and hadn't won any PDC title since lifting his fifth Premier League crown back in May.

💚🎯 Michael van Gerwen's "crisis" (but really a blip) is over after winning the Melbourne Darts Masters.

🏆 It's the Dutchman's ninth title of the season and first since May! pic.twitter.com/SJt40MBpEB

Perhaps more alarming, he headed to the latest World Series event on the back of a run of 13 matches without posting a 100+ average and that was soon extended to 14 during his first-round victory over Tim Pusey on Friday.

However, MVG came storming back on Saturday, averaging 100.63 and throwing seven 180s in a thrilling 8-6 quarter-final victory over old rival Gary Anderson, which including a superb 11-darter.

What a start for Michael van Gerwen as he fires an 11 darter to take the opening leg against the throw. #MelbourneDarts pic.twitter.com/NgxHj76ELk

Van Gerwen then ruthlessly punished defending champion Peter Wright for a poor display in which Snakebite averaged only 82.61 and missed all five darts at doubles, as he ran out a 8-0 victor to set up a final showdown with Daryl Gurney.

His opponent, seeking a third televised title but his first on the World Series circuit, had defeated Simon Whitlock and Rob Cross to get there but despite averaging marginally higher than MVG's 99 with a mark of 100.6, the Northern Irishman couldn't back up his six maximums on his doubles with the title on the line.

It's MVG's ninth title of 2019 since reclaiming his world crown at the top of the year and also his third on TV having also claimed a fifth Premier League and fifth Masters.

This triumph is also the 30-year-old's 13th World Series crown and first in Australia since 2016 and the manner of how he did it will come of greatest satisfaction ahead of next weekend's inaugural New Zealand Darts Masters in Hamilton.

Van Gerwen told www.pdc.tv: "It is good to be back and winning titles again. People have been talking a little bit because they are used to seeing me win all the time.

"Form is temporary and class is permanent, nobody should doubt my talent . To beat Gary Anderson, Peter Wright and then Daryl in the final it shows that I am still the man to beat and I want to make it two out of three when we go to Hamilton next week."

💚 Looks like MVG is getting back to his best!

💪 An 8-0 whitewash over Peter Wright to reach the Melbourne Darts Masters final!

At almost 2/1 pre-tournament, he hadn't been a bigger price for many a year to win a title. pic.twitter.com/5KmDUdNvUK

Gurney, the 2017 World Grand Prix champion and 2019 Players Championship Finals winner, was disappointed at failing to beat MVG for what would have been the fifth time in seven matches having got the better of him at last week's Brisbane Darts Masters.

He said: "I had my chances and if I had managed to hit my double I might have been able to win tonight. I’m playing well and giving myself good opportunities so to make it to another final shows I am still competing at the highest level.

"There are a lot of big events coming up in the rest of the year and I hope to be lifting at least one of the big ones."

His highlight moment of the day was a stunning 132 checkout on the bullseye against Simon Whitlock, which was greeted with silence by the home fans.

132 checkout from the Pantomime villain!

Daryl Gurney with a superb checkout to lead 5-4. #MelbourneDarts pic.twitter.com/T8uiesvdIJ

As for last weekend's shock Brisbane Darts Masters champion Damon Heta, he was soundly beaten by Rob Cross in the quarter-finals as he failed to follow up his victory over James Wade on Friday.

Raymond van Barneveld's hopes of winning a televised title in his penultimate World Series event before retirement were ended in an 8-6 defeat to Peter Wright.

After posting an impressive 106 average on Friday night Barney said: "When I play in exhibitions I feel relaxed with the crowd and want to show them what I can do - I want that Barney back. But it's not been happening for three or four years and you need to be honest with yourself.