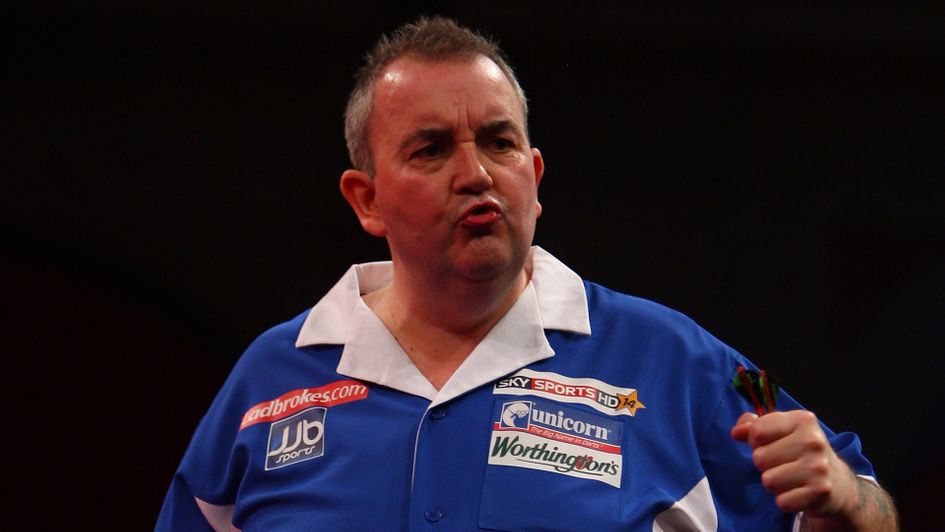 There was no stopping Phil Taylor in 2009

The greatest major darts performance ever? Phil Taylor's 2009 European Championship campaign is statistically the best ever but few will remember it

Phil Taylor produced by far the greatest major tournament average in history back in 2009 but most darts fans, pundits and players have forgotten. Our Paul Nicholson, however, can take a vivid trip down memory lane...

Phil Taylor won almost every tournament available during his legendary career and held pretty much every notable scoring and average record until Michael van Gerwen came along to take a lion’s share off him.

Millions of darts fans around the world – spanning multiple generations – were continually in awe of the Power’s ceiling-smashing exploits from 1988 to 2017 - but sadly hardly anyone will have any recollection of arguably his finest statistical performance across a single major tournament.

No footage seemingly exists of the 2009 European Championship as it wasn’t televised or streamed online but there can be no doubt the UK networks certainly missed a trick by letting these performances slip through the net and into darting oblivion.

However, Paul Nicholson has a vivid recollection of the events in Hoofddorp, Netherlands from October 29 to November 2009 because it was his debut European Championship and despite crashing out in the first round, he stayed for the rest of the weekend to soak up the atmosphere and a quite extraordinary series of displays from one man….

I really can’t see anyone eclipsing this record – in either a European Championship or another comparable weekend major – especially when you think MVG managed a best of 105 in 2015 and an unplayable Peter Wright had a tournament average of around 104 last year.

To put this figure into context with other similar majors, Taylor’s record in a single UK Open was 109 in 2015 while the best from anyone else was MVG’s 105.57 in the same year.

The Dutchman has the best Masters tournament average with 106 in 2017 – an event that’s even shorter with four rounds – while Gary Anderson has the highest at a Players Championship Finals when reaching 105.42 in 2018.

Essentially, what Taylor did in 2009 is beyond comprehension.

I still have fresh memories of this event even though it was now 12 years ago because it was my first European Championship and I was extremely excited to be drawn against Colin Osborne, who was one of the best players in the world.

It was in a period when Taylor walked around venues with an aura of invincibility. Nobody realistically was touching him on a regular basis. Any time he got beaten in this era, it was a story in itself.

If you look into it a bit deeper, he was picking and choosing his events, focused predominantly on the majors and was constantly fresh.

He had it all cracked. He knew what he needed to do at his age and skill level to beat everyone in front of him.

It was almost demoralising for everyone else. What do we have to do to beat him?

Eventually people did start figuring it out some years later but ultimately that coincided with age catching up with him rather than anyone reaching the kind of levels he did back then.

Nobody on this planet was even close to that level.

The one time anyone in this tournament tried to have a go at him, Taylor raised it to a level we’d never seen before and that was the 118 average against Gary Anderson – world record territory at the time.

I remember during Taylor’s first-round match he fell 2-0 down against Toon Greebe, who was a youth player, and everyone wondered what on earth was going on!

But then he turned it on and went crazy for the next six legs and averaged 111.03! Toon was a very promising player back then but he went on to have a very sketchy 10 years in the BDO and PDC, and he also lost a foot in 2017 due to a severe infection.

Thorn in Robert’s side

Robert Thornton was enjoying a very good season in 2009 so to beat him 9-0 that year – let alone any other – takes some doing.

Robert had troubled him in the 2008 final in Frankfurt but on this occasion Taylor averaged 110.88 and he simply had no answer.

I’d been knocked out by this point having played poorly against Colin Osbourne – although if you want a poor excuse I do blame the carpet being too ‘bouncy’! I was still there in the practice room and watching every dart being thrown from the players lounge. I couldn’t get enough of it because this was still the infancy of my career.

You want to soak up every atmosphere – especially in majors – and you could tell Taylor was producing special darts you just didn’t want to miss.

When Anderson turned up in the quarters, you could tell he fancied his chances and produced a brilliant 106 average – but even that was nowhere near good enough!

Taylor’s 118.14 was a world record average at the time although he went and broke that the following year at the UK Open with 118.66 against Kevin Painter.

Sealing the title in style

I remember thinking whether this is what I’d have to do to ever win a major. A sky-high average once is one thing but to keep churning them out like this is astonishing.

Name any superlative and it doesn’t do his tournament performance justice.

Taylor averaged 109.36 in an 11-3 victory over Jelle Klaasen and then 109.35 when thrashing Steve Beaton by the same scoreline later that same evening for the title.

If only this had been on British TV, we’d be talking about this forever, but instead it’s shut away.

Even though it wasn’t televised in the UK, it definitely had a major feel to it due to the calibre of the players competing and how well they’d been performing that season.

However, there was an air of disappointment from a PDC perspective that it wasn’t shown on British television. Bravo would take it the next year but they did struggle to get this tournament off the ground initially.

As far as the players were concerned though, there was plenty of prize money up for grabs and qualification for the tournament was very difficult. You had to be an extremely good player just to be in it and that’s why it meant a lot.

The Netherlands crowd were booming, just how you’d expect, while we had to walk onto the stage via a spiral staircase and players needed the walk-on girl just to help them get down in one piece!

The only reason these performances from Taylor aren’t held in much esteem by darts fans is because they simply haven’t seen them!

We watched the games in bemusement in the players lounge because it was just a side-on view that included the board. It wasn’t proper coverage at all and not what we were used to.

I’d love to find footage but despite making enquiries, it doesn’t appear to exist.

Statistically – for a major tournament - you have to say yes.

If his semi-final and final is not the epitome of consistent brilliance then I don’t know what is because they were both the same scoreline and almost identical averages.

If only we could all watch it again.