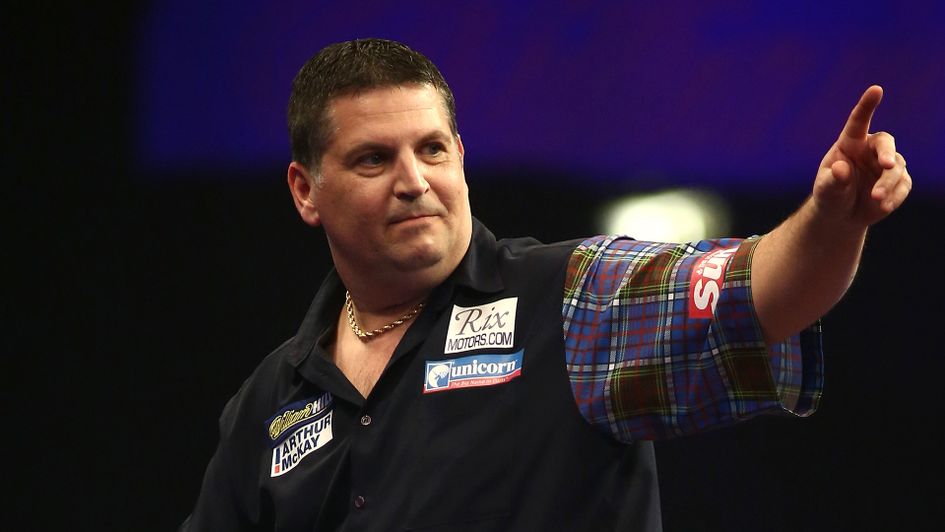 Watch all the previous nine-dart finishes in World Darts Championship history as this year's hopefuls bid to hit the 11th at Alexandra Palace.

It's amazing to think the first 15 editions of the PDC World Darts Championship went by without a single nine-dart finish being thrown.

Here, we've compiled clips of all 14 perfect legs in World Darts Championship history while we've also thrown in the near misses from Phil Taylor and Lim for good measure!

A moment that will remain etched in the annals of darting history forever, Paul Lim landed only the second televised nine-darter ever (the first of which was John Lowe six years earlier) in the second round of the BDO World Championship. It also earned the Singapore favourite a cool £52,000 - a prize only bettered by Lowe's £102k in 1984 and Phil Taylor's £100k in the 2002 World Matchplay.

And this never gets old. pic.twitter.com/O6U1xIhZRh

Not since Paul Lim's nine-darter at the 1990 BDO World Championship had a perfect leg been seen at the highest of levels, but van Barneveld ended the 19-year wait by hitting the first in the PDC's version.

Barney hits the tournament's first ever nine-darter in 2009... pic.twitter.com/S24jyF1olw

The five-time world champion incredibly managed the feat 12 months later to send his fans wild in a clash against Brendan Dolan.

Adrian Lewis remains the only man to have thrown a nine-darter in a World Championship final and he ensured he made it count by going on to beat Gary Anderson 7-5 in an absolute classic.

The unheralded Dean Winstanley was well out of form during a match he went on to lose but out of nowhere the Rotherham thrower strung together a perfect leg before celebrating in style!

Surprisingly this is still Michael van Gerwen's only World Championship nine-darter even though he so nearly bagged his second in the following leg...

🎯🙌 One week to go until the World Darts Championship!

💚 Remember when MVG sent the Ally Pally crazy when going oh so close to back-to-back nine-darters...pic.twitter.com/Oi7n5jDZv7

One of the game's most talented and popular players never to have won a world title produced the first of two nine-darters to be thrown at the 2014 World Championship, albeit it came in defeat...

Kyle Anderson was the second - and he lost as well!

Jackpot joined Raymond van Barneveld as the second man to throw two World Championship nine-darters but the Dutchman promptly got his revenge by defeating him.

The Flying Scotsman produced one of the most dominant performances ever seen at a World Championship during this 6-0 victory, and a nine-darter was the icing on the cake. He went on to win the title by defeating Adrian Lewis.

🎯🏆 When Gary Anderson last won the world title, he did this along the way...

To say the roof would have been lifted off the Alexandra Palace roof had this double 12 landed, is a metaphorical understatement!

Oh how close we came for a historic nine-darter two years ago when Paul Lim rolled back the years, narrowly missing D12 for perfection! 😩

Will we see a perfect leg at the 2019/20 @WilliamHill World Darts Championship? pic.twitter.com/KHgTfCmdMO

Phil Taylor has achieved the nine-dart finish more than any other darts player on TV with 11 but he never managed it on the world championship stage. However, he came mightily close in his last ever competitive match...

Phil Taylor came so close to bookending his incredible career with a nine-darter in the World Championship final... What an effort! pic.twitter.com/aidG6k78w3

James Wade recorded the first nine-darter in five years at the PDC World Championship but the feat failed to inspire the Englishman as he joined the growing list of top seeds to suffer an early exit at Alexandra Palace.

It was an understated reaction from Wade at the empty venue, merely bumping fists with Bunting before the action resumed, and the perfect leg had little impact on the match for the left-hander, who averaged a disappointing 87.94.

🎯 Sensational stuff from James Wade who provides the first nine-dart leg at the Worlds for five years.

Never before in PDC televised tournament history had a perfect leg won a match while it was the first to be hit in front of fans at the Alexandra Palace since Borland's illustrious countryman Gary Anderson managed it almost six years ago.

It was the 12th in World Championship history and fittingly occurred on the same night that Paul Lim, who hit the first ever way back in 1990, became the oldest man to compete on this stage at the age of 67.

William Borland winning a World Championship match on debut in a deciding leg with a NINE-DART FINISH!!

Darius Labanauskas made it two nine-dart finishes in as many sessions at the World Darts Championship, before crashing out at the hands of Mike de Decker.

The Lithuanian threw 174, 180, 147 to win the opening set, only to lose the following three as De Decker earned a meeting with Dave Chisnall.

It was just the 13th perfect leg in World Championship history and came less than 24 hours after William Borland's sensational match-winning nine-darter on Friday night.

There had never been more than two perfect legs in one major tournament but Gerwyn Price first ever on TV was the third of this year's edition to emulate the efforts of Willie Borland and Darius Labanauskas before Christmas.

The crowd-pleasing moment arrived in the second leg of the fourth set but an unfazed Michael Smith promptly bounced back to win the next two legs and square the match at two apiece...before going onto to win an epic 5-4.

Gerwyn Price's first ever televised nine-darter is a record-breaking third of this year's World Championship! pic.twitter.com/KLxGu8duFb