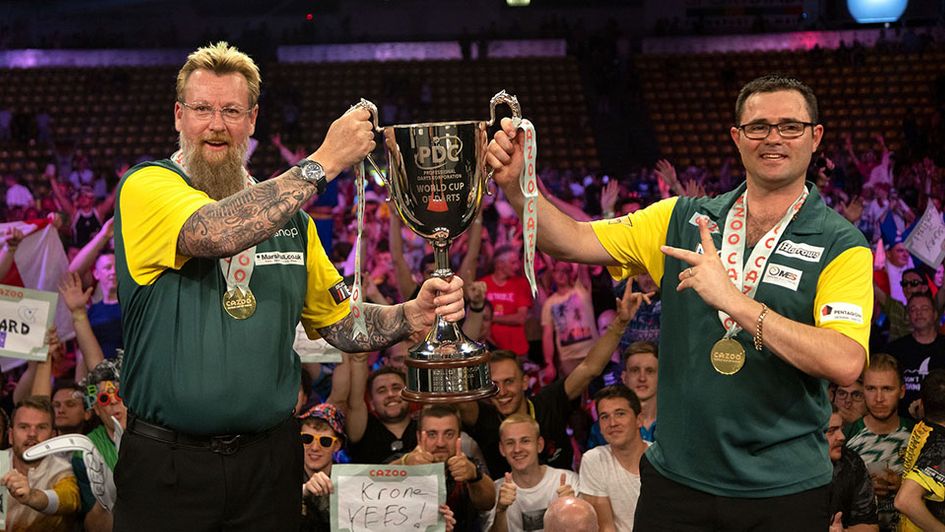 Australia have won the World Cup of Darts for the first time after Simon Whitlock and Damon Heta whitewashed Wales pairing Gerwyn Price and Jonny Clayton.

It was a particularly special moment for Wizard, who has played in every World Cup since the inaugural edition in 2010 and famously missed two match darts in the heartbreaking defeat to England in the 2012 final.

Whitlock, 53, did suffer the agony of missing another in the doubles rubber against the Welsh on this occasion that would have completed a 3-0 whitewash but it mattered little as his team-mate Heta overcame Clayton 4-2 in the first of the reverse singles to close out a 3-1 victory over the 2020 champions.

Simon Whitlock has played in every World Cup and missed two match darts in the heartbreaking final defeat of 2012.

Now he's celebrating the greatest moment of his career at the age of 53. Great scenes with Damon Heta at the end! pic.twitter.com/KDZZmayCRL

“It is life-changing. I have dreamt about this moment my entire life and I’ve finally got there,” said an emotional Whitlock.

“It feels amazing. I had a great partner. Damon has been amazing. He’s a great friend, and he’s the best player on the planet right now. He is going to be the next world champion.”

🏆 AUSTRALIA ARE ON TOP OF THE WORLD! 🇦🇺

“Simon dragged me through the beginning,” admitted Heta. “I’m stoked for Simon and stoked for Australia with all the support we’ve had back home.

“Everything we are sacrificing being here and we’ve got the title in the bag. It’s an amazing feeling.”

💷🙌 Australia's World Cup of Darts triumph was also a 10/1 winner for our tipster @ChrisHammer180, who backed Damon Heta and Simon Whitlock at 10/1! pic.twitter.com/LM8XdjHcJg

In the opening singles tie, Heta blitzed Price 4-0 to put Australia in early control of the final as the Welshman failed to sparkle with an average of just 80.

The Heat, who had to come from 3-1 down against Michael Smith in the semi-finals, only averaged a fairly mediocre of 92.5 himself but it was plenty good enough to restrict Price to just two attempts at a double.

HETA TURNS UP THE HEAT! 🔥🇦🇺

WOW! Who saw that coming?! Damon Heta whitewashes Gerwyn Price in the opening singles and Australia take a 1-0 lead in the final!

Simon Whitlock came from 2-1 down to overcome Jonny Clayton 4-2 in the second singles rubber - but only after missing six darts at double top in the sixth leg.

The Wizard was playing nerveless darts until that point as he bid to banish the demons of 2012 and a stylish 120 checkout when the Ferret waited on 26 put him into a 3-2 lead.

Clayton failed to take advantage of Whitlock's troubles on tops in the next leg as the Aussies moved one point away from glory.

ON THE BRINK OF GLORY! 🇦🇺

AUSTRALIA MOVE INTO A TWO-NIL LEAD!

With his seventh match dart, Simon Whitlock finally pins tops to defeat Jonny Clayton and they need just one more point for the title!

It looked as though Whitlock and Heta would complete a whitewash victory when they moved into a 3-2 lead in a thrilling doubles rubber but the Welsh duo held their nerve to force a deciding leg.

The Aussies had the advantage of throw and were first to a finish but Whitlock, who missed two match darts in the agonising final defeat against England in 2012, spurned his chance on double 18 when trying to finish from 66.

Clayton duly made him pay with his last dart in hand on double eight to force the final into the reverse singles.

IT'S NOT DONE YET! 🏴󠁧󠁢󠁷󠁬󠁳󠁿

Look what it means to the Welsh pairing as they survive a match dart to keep this final alive!

However, the Ferret couldn't maintain the momentum as a slow start allowed Heta to move into a commanding 3-1 lead and although the Heat spurned a title dart in the next leg, he eventually got the job done at the next attempt to spark wild scenes of celebration.

“We weren’t at our best in the final but Simon and Damon played fantastic,” said Price, featuring in his second final in three years.

“I said at the beginning of the tournament we’d play Australia in the final, but I predicted that we would win, so I was wrong there!

“We didn’t fire tonight, but we’ll be back and we will be stronger next year.”

Australia's success was also great news for followers of our darts pages, with 2012 finalist Paul Nicholson backing them in his latest column and our resident tipster Chris Hammer including Whitlock and Heta in his staking plan at 10/1 pre-tournament.

"I've dreamt about this moment my whole life!" ❤️

Australia's Simon Whitlock and Damon Heta are champions of the world! 🌎🏆 pic.twitter.com/2I6jJIon9F

Wales sealed a spot in their second World Cup final in three years with a resounding 2-0 victory over the Netherlands.

The 2020 champions got off to a flying start when Gerwyn Price cruised to a 4-1 victory over Danny Noppert despite averaging just 88.75 compared to the astonishing 117 he managed in his quarter-final clash against Martin Schindler earlier in the day.

Team-mate Jonny Clayton then came out on top in a high-quality affair against Dirk Van Duijvenbode as he defied four 180s and legs of 11 and 12 darts to triumph 4-2 and ensure victory without the need of a nervy doubles rubber.

WALES ARE IN THE FINAL! 🏴󠁧󠁢󠁷󠁬󠁳󠁿

Welsh duo Jonny Clayton and Gerwyn Price breeze through to the final, winning both singles over Dirk van Duijvenbode and Danny Noppert in STYLE!

Australia then reached their first World Cup final in a decade thanks to Damon Heta and Simon Whitlock ousting top seeds England 2-0.

Michael Smith looked as though he'd give the top seeds a comfortable start but he bust 72 when looking to seal a 4-1 victory and Heta made him pay by reeling off the next three legs to put the Aussies in the driving seat.

World Cup-ever present Whitlock ruthlessly finished the job by averaging 103 and pinning four of his six attempts at double to whitewash a below-par Wade 4-0.

It's 10 years since Whitlock and Paul Nicholson lost the most dramatic final of all time against Phil Taylor and Adrian Lewis in 2012 so it would be fitting if they can follow up this triumph over the latest English duo with their first ever World Cup.

AUSTRALIA ARE IN THE FINAL! 🇦🇺

Australia are into the World Cup final for the first time in TEN YEARS! World Cup ever-present Simon Whitlock whitewashes James Wade to complete victory over the top seeds!

Up next | The Final 👉 Wales v Australia pic.twitter.com/jONzKtgYvx

Bully Boy, who has won five singles titles since the start of May including the prestigious US Darts Masters, thrashed Henderson 4-0 in the opening rubber before Premier League semi-finalist Wade cruised to a 4-1 win over Wright despite averaging just 81.

Performance-wise, neither Englishman had to be anywhere near their best, with Hendo averaging just 80 against Smith (91) and failing to have a single attempt at a double while world champion Wright averaged 82 and missed 11 of his 12 attempts at the outer ring.

THE CHAMPS ARE OUT! ❌

The top seeds only drop one leg on their way to defeating John Henderson and Peter Wright! pic.twitter.com/0DhOez1Vow

They will surely be pushed much harder by Australia, who produced a sensational doubles display to dump out Belgium.

Dimitri Van den Bergh defeated his housemate Damon Heta 4-2 in the opening singles tie, only for Whitlock to defy a 170 finish from Kim Huybrechts to prevail 4-3 with a 101 average.

The Australian aces then ran riot in the decisive doubles showdown, averaging 109.31 to whitewash the fourth seeds.

UK Open champion Noppert battled past Gurney 4-2 in the opening rubber, before Van Duijvenbode recovered from 3-1 down to deny Dolan in a battle of the former World Grand Prix finalists.

Van Duijvenbode spurned 14 darts at double midway through the contest, but rallied superbly in the latter stages, converting 92, 153 and 74 finishes to wrap up a dramatic deciding-leg win.

Jonny Clayton then followed Price’s heroics with a professional 4-2 win over German number one Gabriel Clemens, firing in seven 140s and pinning four of his seven attempts at double.

This is truly remarkable.

Gerwyn Price takes out a 170 checkout to lead Schindler 3-0 and he's charging toward a record average! 🤯 pic.twitter.com/efWOK40IPl