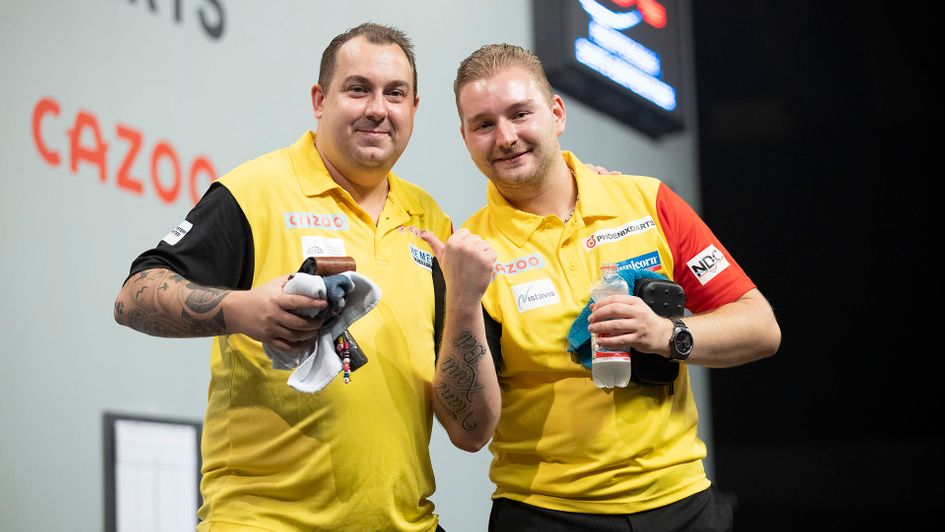 The Sky Sports-televised World Cup of Darts takes place in Germany this weekend and our tipster Chris Hammer brings you his preview and best bets.

The World Cup of Darts is always one of the most popular events on the calendar but last year its stock shot through the roof thanks to big John Henderson's heroics for Scotland.

The sight of a true title-less people's champion with a gold medal round his neck and raising a trophy aloft was one of 'the' greatest sporting images of the year, while the manner of the role in the team made it sweeter still. He memorably pinned the winning doubles in deciding legs of pairs rubbers to beat both the Netherlands and Wales before helping Peter Wright see off Austria in more comfortable fashion.

Although the Hendo factor made Scotland's success feel like a fairytale, you can't really say it was a shock given the combined calibre of the players and once again it proved that cream does tend to rise to the top in this annual pairs event, despite the precarious nature of the first round which consists of just one doubles rubber.

I'm firmly in the camp that the pairs matches should always be at the heart of every tie beyond round one - rather than only if the two singles matches are shared - because it's clearly what makes this event special and unique compared to regular singles competition. As Paul Nicholson suggested in a Sporting Life column, why not always have a doubles rubber that's worth two points so if a team loses both singles rubbers, they can still level the match and force a deciding sudden death leg.

As it is, only England (x4), Netherlands (x4), Scotland (x2) and Wales have won the title in its 11 previous stagings but the odds suggest there are seven potential champions this time, including Belgium, Australia and Northern Ireland.

I'll run through each quarter of the draw before predicting a final and the eventual champions.

England have won the World Cup of Darts four times but not since Phil Taylor was last in the line-up way back in 2016 - so could this new pairing of Michael Smith and James Wade finally end this long wait?

They head into the tournament as top seeds based on their combined ranking while Smith can certainly be regarded as the most form player in the entire field - especially with Premier League champion Michael van Gerwen absent through injury.

Even so, not even MVG has managed as many titles as Bully Boy's five since the start of April and he's also won 40 of his last 47 matches in all competitions during this time.

Wade is making his third appearance in the event having suffered an embarrassing first-round exit to Spain alongside Taylor back in 2010 before an unsuccessful return to the event with Dave Chisnall last year and based on the way he upset the odds to reach the Premier League Play-Offs, he'll be confident of playing more than a supporting role.

However, they were handed a very tricky opening match against Adam Gawlas and Karel Sedlacek of Czech Republic and they'll really need to hit the ground running to avoid a shock exit. Both Gawlas and Sedlacek are very handy operators especially in such a short format and if England could have chosen to avoid any nation first up, the Czechs would have been high on their list.

Of course they should progress and march on from there into quarter-finals, where you'd expect them to meet Wright and Henderson in a potential classic that may all boil down to that pairs rubber.

Verdict: England to come through if they avoid a Czech Republic scare

I've backed Belgium to win the World Cup the past couple of years and I've decided to stick with them once again for much more than stubborn perseverance.

Dimitri Van den Bergh had endured a pretty quiet season by his own high standards but after reaching a European Tour final last month, he continued on an impressive upward curve that culminated in him winning the Nordic Darts Masters at the weekend.

To do that he thrashed Gerwyn Price 10-5 and Michael Smith 11-4 to reach the final, where he put Gary Anderson to the sword with an impressive 11-5 success to claim his second televised title.

His partner Kim Huybrechts has been typically inconsistent in 2022 but there's no player more fired up in World Cup matches than the Hurricane and he even managed to find some timely form himself by reaching Wednesday's Players Championship semi-final.

They showed tremendous team spirit en route to the semi-finals back in 2020 and although they were knocked out early on by Austria last year, I feel they are too big a price to finally break their duck.

Japan is an easy opener but they'll need to fire on all cylinders to see off either Poland or the USA in round two before a quarter-final with Australia, who are another of my outright picks.

Our columnist Paul Nicholson was involved in the most dramatic World Cup final for Australia back in 2012 and since then his playing partner that day Simon Whitlock has helped them reach two more semi-finals and four quarter-finals.

Just like Huybrechts, the Wizard always seems to come alive for this tournament and he was bitterly disappointed last year that he couldn't help Heta go the distance as a fitting tribute to the late, great Kyle Anderson.

Heta, who now benefits from valuable World Cup experience under his belt, has been playing a consistently high standard of darts this season and his 2022 ProTour average of 98.75 is third only to Gary Anderson and Michael van Gerwen. However he's also played a lot more matches than anyone (71) due to not missing tournaments and also going deep in many of them, which consequently makes his high average even more impressive.

Whoever comes through my expected quarter-final will fancy their chances of glory.

Many darts fans will fully expect Wales to come through this quarter with relative ease and it's no real surprise to see the tournament favourites priced up at just 2/5 to reach the last four.

However, Gerwyn Price is not at his best right now and Jonny Clayton may just be temporarily running low on gas after such a hectic campaign in which he's unbelievably yet to win a title of any kind.

He was favourite to defend his Premier League title on Monday night but struggled to get going in a sound defeat to Joe Cullen while he suffered an early exit in Tuesday's Players Championship event before missing Wednesday's edition.

Fortunately for Wales, Mensur Suljovic is struggling for form right now and is arguably now the weak link in Austria's side despite what the rankings say when you consider how much better Rowby-John Rodriguez is playing in 2022.

Germany's new look pairing of Gabriel Clemens and Martin Schindler will be a dangerous threat in the quarters and they obviously have the advantage of a home crowd roaring them on.

Schindler is really making giant strides performance-wise this season and has reached a Players Championship final so if the higher ranked Clemens can produce what we know he's capable of, then a shock could be on the cards.

Verdict: Germany a spot of value to win the quarter

The Netherlands must cope without an injured Michael van Gerwen for the first time since he made his debut but that will probably be music to Danny Noppert's ears as he can look forward to forging a more harmonious team spirit with Dirk van Duijvenbode.

However, they are going to have a tough second-round clash with either Republic of Ireland or Canada and you'd expect whoever comes through that assignment will take on Northern Ireland for a place in the last four.

Daryl Gurney and Brendan Dolan are both obviously very high calibre players but for some reason have struggled to gel as a pairing for most of the six years they've been World Cup team-mates.

After reaching the semi-finals on Gurney's debut in 2016, they suffered wounding first-round exits to Germany, South Africa and Canada in three of the next four editions but after surviving a scare against Hong Kong last year, they went on to reach the quarters where they were agonisingly pipped by Austria in a deciding leg of the decisive pairs rubber.

I'm not sure they quite have what it takes to win the tournament but they have a strong chance of coming through quarter and if it's Germany in the last four, then a run to a maiden final is very possible.

Verdict: Northern Ireland to beat Netherlands in the quarters

Best of nine legs - doubles. All players take part in every leg of the match, in an alternative visit format.

These matches will be played as two best of seven leg 501 singles matches, with both nations nominating the order in which their players play.

In the event of both nations winning one singles match apiece, a best of seven leg 501 doubles match will be played to decide the tie.

This will be two best-of-seven-legs 501 singles matches, with both nations nominating the order in which their players play the first two matches, followed by a best of seven leg 501 doubles match and then reverse Singles matches. The first team to win three games is declared the winner.

Where can I watch the World Cup of Darts on TV?

The Cazoo World Cup of Darts will be televised on Sky Sports for UK viewers, through the PDC's international broadcast partners, including DAZN and Viaplay, and on PDCTV for Rest of the World Subscribers.

Are tickets available for the World Cup of Darts?

World Cup of Darts: Past Finals