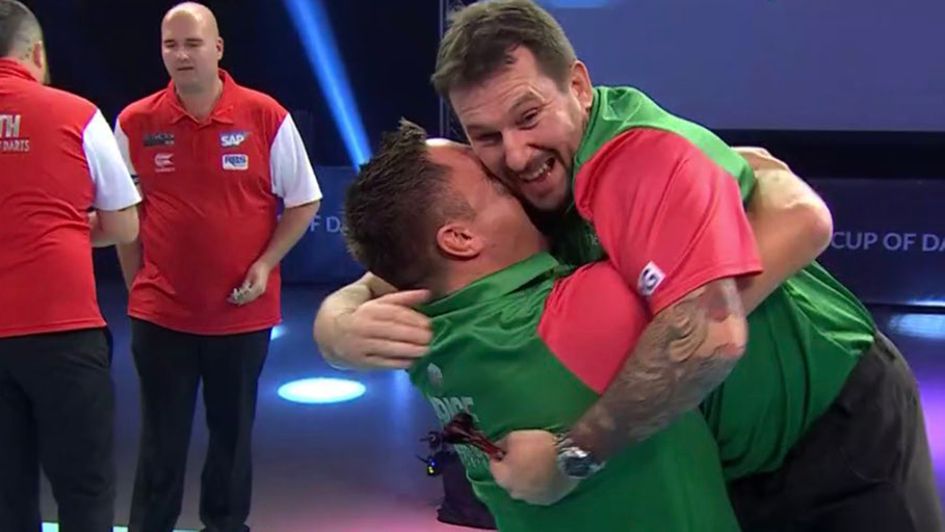 Wales won the World Cup of Darts for the first time in their history after Gerwyn Price and Jonny Clayton teamed up to defeat England 3-0 in Austria.

Price had been a part of the a 2017 pairing with Mark Webster that finished runners-up to the Netherlands but the world number three finally ended the nation's 10-year wait for the trophy alongside an equally imperious Clayton.

🏆🏴󠁧󠁢󠁷󠁬󠁳󠁿 Wales are World Cup of Darts winners for the first time thanks to Gerwyn Price and Jonny Clayton!

🤩 Their 3-0 win over England in the final completed a mesmerising three days from the Welsh Dragons.pic.twitter.com/z4PeZ8ZokV

The duo, who weren't obviously on the scene when Wales lost the inaugural staging to the Dutch in 2010, made a dream start as they both won their opening singles matches Salzburgarena to move 2-0 up in the best-of-five point final.

World number three Price was first up on the oche and made it four singles wins out of four this weekend with a dominant 4-1 victory over Michael Smith that started by taking out the bullseye for an unconventional 70 checkout.

Raw emotion on stage as Price pins the bull for the opening leg and look how much it means! pic.twitter.com/34zcvCd21J

Price, who has won four titles since the start of September including the televised World Grand Prix and World Series of Darts Finals, took three legs on the trot after Bully Boy levelled to move Wales two points from glory.

In a race to three, Wales are a point to the good! Gerwyn Price wraps up a strong 4-1 win over Michael Smith to kick off the final!

Clayton also came roaring out of the blocks like a true Welsh Dragon as he averaged 104 in a superb 4-2 win against Rob Cross that moved his nation onto the brink of their first ever World Cup title.

Jonny Clayton puts Wales in a very strong position heading into the doubles as he closes out a clinical 4-2 victory over Rob Cross!

The Welsh duo are a point away from lifting the World Cup trophy! pic.twitter.com/fb8ELFWEqu

In what was their fourth Pairs match of the tournament, Price and Clayton bossed the averages with a barrage of high scoring - particularly from the Iceman - but Cross and Smith showed guts to keep holding their throw and force a deciding leg.

However, the Welsh were not to be denied and they saw it out with nerves of steel to claim an emotional and historic victory - as well as a top prize of £70,000 top prize.

Price, who has also claimed back-to-back Grand Slam of Darts titles over the past two years, said: "It's the proudest moment of my darting career - I'm quite emotional. I've had some success recently for myself but to win this for Wales this means so much to me.

"I know I’m playing well at the moment but this is a doubles game and I couldn’t win it without Jonny. This is a team and we deserve it."

🏆🎯 That feeling when you win a World Cup!

Clayton said "I’m the proudest man on the planet right now and to play with Gezzy, the best player in the world at the moment, I’m just so happy.

"This means the world to me, and to beat England in the final, I'm so proud."

England were featuring in their first final since four-time champions Phil Taylor and Adrian Lewis last teamed up in 2016 and Cross said: "We’re proud of what we’ve done this weekend but we didn’t play our best in the final and they deserved to beat us."

With fans still unable to attend events due to the Covid-19 pandemic, the final was played in different circumstances to previous years but Smith spoke of his delight to still be playing and was quick to credit his opponents.

"It’s amazing just to be here and playing darts but I have to say the better pair won today and they fully deserve it," said Smith.

"We’ve given it our all this weekend and dug deep when we needed to, but just didn’t do enough in the end."

It wasn't to be for Michael Smith and Rob Cross in Salzburg, but the pair showed true class in defeat 👏 pic.twitter.com/BdnsOGvTMA

England are through to their first World Cup of Darts final since Phil Taylor retired after a battling 2-0 victory over Belgium that could so easily have gone the distance.

The Power lifted the trophy four times with Adrian Lewis in 2012, 2013, 2015 and 2016 but Rob Cross and Michael Smith are now one win away from ending the nation's four-year wait for a fifth title.

Bully Boy, who is still waiting to win his first individual televised major, edged out Kim Huybrechts 4-3 in an opening rubber in which neither player broke the throw.

Michael Smith successfully holds his throw four times to clinch a deciding leg victory over Kim Huybrechts to give England a 1-0 lead in this semi-final!

Dimitri Van den Bergh suffered two doses of bad luck to take the tie to a Pairs rubbber - first by missing the bull for a 164 checkout when leading 3-2 and then suffering an unbelievable bounce out on double 12 in the deciding leg.

We are AGAIN into a deciding leg! Van den Bergh narrowly misses the bull for a 164 for the match and Cross takes us all the way! pic.twitter.com/IZqE4ZcpYN

He did get a further three bites at the cherry after Cross also spurned his first attempts to steal but he missed those as well and Voltage would make no mistake again.

The top seeds will face tournament favourites Wales in the final after Gerwyn Price and Jonny Clayton claimed a convincing 2-0 victory over Germany.

Gerwyn Price was always in control of his 4-2 victory over Gabriel Clemens while Jonny Clayton averaged over 100 in his impressive triumph against Max Hopp by the same scoreline, finishing it off with a superb 121 checkout on the bullseye.

🏴󠁧󠁢󠁥󠁮󠁧󠁿🎯🏴󠁧󠁢󠁷󠁬󠁳󠁿 It's an England v Wales 'dream final' at the World Cup of Darts! pic.twitter.com/CKaz5hzM5y

Wales kept alive their hopes of winning their first ever World Cup of Darts title by holding their nerve to beat Australia 4-2 in the decisive doubles rubber for a thrilling 2-1 quarter-final victory.

Gerwyn Price survived missed match darts from Simon Whitlock to edge the opening singles rubber 4-3 - with the help of finishes from 84 and 96 - only for Damon Heta to overcome Jonny Clayton 4-2 with an average of 102 and level the tie.

The 2010 and 2017 runners-up were too strong in the deciding Pairs rubber, with Price pinning the match-winning double six.

It's a superb doubles display from Price and Clayton who average almost 99 as they seal their spot in tonight's semi-final with a 4-2 win over Australia!

They will next face Germany, who just about made the most of Michael van Gerwen's injury to reach their first ever World Cup semi-final.

MVG's preparations were hampered as he underwent medical treatment for a trapped nerve in his back on Sunday afternoon but battled through the pain barrier to win his singles rubber against Max Hopp 4-1 after Danny Noppert had earlier lost a dramatic clash with Gabriel Clemens 4-3.

The four-time champions - for whom MVG has played a part in three of those in 2014, 2017 and 2018 - looked as though they were heading through when leading the decisive Pairs tie 2-0 only for the German duo to make it 3-3.

Hopp initially missed three match darts but breathed a sigh of relief when MVG missed one at tops, leaving Clemens to pin double 10 for a famous win.

GERMANY ARE THROUGH 🇩🇪

Germany are into the World Cup of Darts semi-finals after Gabriel Clemens pins D10 last dart in hand to win the pairs decider over The Netherlands! pic.twitter.com/3rmTfU4fIv

England also needed to come through a deciding Pairs clash with Austria to reach the semi-finals.

However, he missed match darts to give the hosts overall victory and Cross made him pay to take an absorbing tie all the way.

Rob Cross survives four match darts and he finally pins D6 to take this to a doubles decider for a spot in the semi-finals! pic.twitter.com/n60if8eUWd

Just like the singles ties before it, the Pairs went to a deciding seventh leg but England held their nerve to triumph.

ENGLAND ARE INTO THE SEMI-FINALS! 🏴󠁧󠁢󠁥󠁮󠁧󠁿

Incredible drama on stage there as all three matches go to a deciding leg but it's England who secure their place in the semi-finals!

It's a fourth World Cup quarter-final exit for Austria...

📺 Up next 👉 Wales v Australia pic.twitter.com/izLdLfzwll

They will meet Belgium, who reached the semi-finals for a fifth time in six years with an entertaining 2-1 defeat of surprise packages Canada.

Kim Huybrechts averaged 108 in thrashing Jeff Smith 4-1 but Matt Campbell stunned Dimitri Van den Bergh with the help of checkouts from 160 and 120 in a clinical display of finishing.

Canada led the Pairs decider 2-1, but missed doubles in the next two legs as Belgium capitalised to move ahead before securing victory.

BELGIUM ARE INTO THE SEMIS! 🇧🇪

Wow. What a contest.

A great battle on stage there between four great players, as Belgium are successful in the pairs decider and they seal their spot in the semi-finals!

📺 Up next 👉 England v Austria pic.twitter.com/Zpna7bC41a