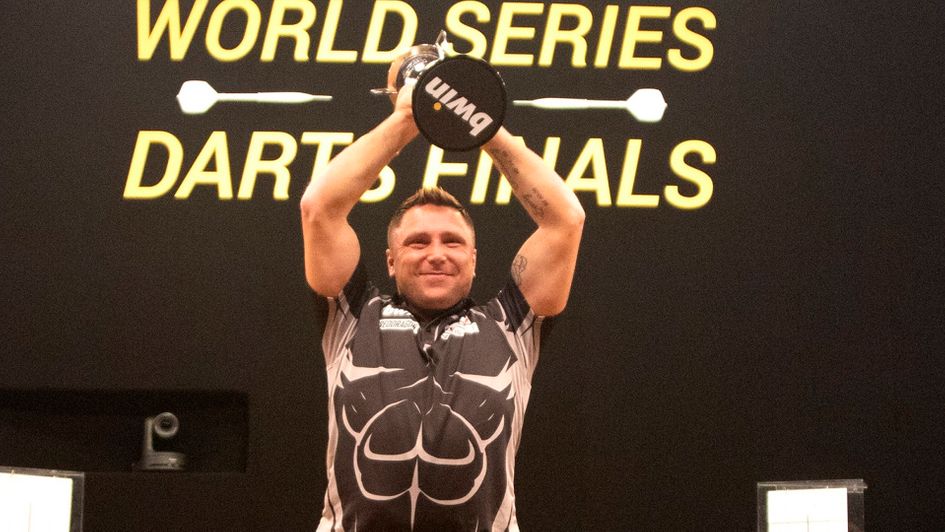 Gerwyn Price produced a thrilling comeback from 8-4 down to beat Rob Cross and win the third TV title of his career at the World Series of Darts Finals.

The two-time Grand Slam of Darts champion headed into the climax of the event in Salzburg as hot favourite having produced a stunning performance to overcome Peter Wright 11-6 earlier in the night while Voltage laboured to victory over James Wade.

Price had won his previous 16 matches over the past week, including his back-to-back titles runs at the Autumn Series, and also averaged over 100 on 10 occasions during that incredible run of form and in eight of his last nine.

However, the Welshman got off to a sluggish start and Cross took full advantage by storming into a commanding 8-4 lead against the odds as he chased his fifth televised title, fourth 'major' and 10th overall in the space of just three years.

Despite looking down and out, Price then responded with his trademark herculean character - that had also served him so well in a brilliant quarter-final against Nathan Aspinall in which he survived a match dart - as he finally rediscovered his rhythm to win seven of the next eight legs to seal a stunning 11-9 triumph and further underline his claims to becoming a future world number one.

👏 The Iceman came from 8-4 down to beat Rob Cross and win his third TV title of his career.pic.twitter.com/W6ONXWTxXy

Cross sportingly lifted Price into the air with a big bear hug despite the pain of squandering a four-leg lead while the crowd at the Salzburgarena enthusiastically cheered a deserved champion, whose blockbusting performances continue to shake off his old pantomime villain tag.

The 35-year-old averaged 'just' 96.21 compared to Voltage's mark of 94.22 and hit three more 180s with five while both players were impressive on their doubles, with Price hitting 11 of his 20 and his opponent pinning nine of his 16.

Although the first prize cheque of £70,000 doesn't go towards the Order of Merit, his current ranking of third behind Michael van Gerwen and Wright will only go one way if he regularly produces this vein of form over the coming months and years.

His cumulative average across his winning streak of 17 matches stands at 100.1 and he'll be hard to stop at the next televised major in October - the double-start World Grand Prix in Coventry.

What a way to congratulate your opponent even though defeat must have hurt.

Cross kicked off the match with a stunning 144 checkout and despite falling 2-1 behind to Price's fine finish from 128, he held his resolve and won seven of the next 10 legs - a run which concluded with a clinical out from 110.

The former world champion and 2019 World Matchplay winner, who defeated Price in last year's European Championship final, was exceeding wider expectations this weekend following a lean run of form which included failure to progress past Judgement Night in the Premier League and now a shock was really on the cards.

That's the way to start!

A brilliant 144 checkout from Rob Cross to open up this final and break in the opening leg...#WSF2020 pic.twitter.com/AzZEnCwBCw

Price kick-started his comeback in the nick of time with pressure finishes of 74 and 79 when Cross waited on two-dart combinations and although he then closed to 8-7, the Hastings man took out 100 to move to within two legs of glory.

Cross was again waiting to return to the oche with scores of just 60 and 52 required in the next two legs but he wouldn't get a chance in either as this year's UK Open runner-up, who recently missed out on a place in the Premier League play-offs before his purple patch, checked out from 56 and 74 to level the match.

Price punished Voltage for a miss at the bullseye to move 10-9 ahead before sealing the title with a 13-darter - after his opponent had missed one dart at double 18 to force a decider.

The triumph is also good news for followers of our tips after the Welshman was put up as the headline selection at 6/1 in our pre-tournament preview which returns nine points of profit.

🤑...and those who followed our tipster @ChrisHammer180, who put him up as his headline selection at 6/1 pic.twitter.com/EzENHLEXWY

Price told www.pdc.tv: "I'm really happy and a bit relieved. From 8-4 down I'm proud of myself, to dig deep once again like I have in a few games over the last couple of weeks.

"Early on in the final I thought I was playing brilliant - I should have been at least 4-1 up but I knew that Rob was going to come out firing and when he banged in that 144 I knew I was in for a tough game. In the middle part of the game I was beating myself up and let Rob get in front, but I stuck in there until the end and got over the winning line.

"I never give up any more and I always believe that as long as there's one leg to go I can still win, and I stuck in there until the end. I'm playing well, practising well and giving 100 percent every single time. Whoever's going to beat me is going to have to play really well and take their chances, because if not then I will.

"I'm looking forward to the European Tour next week and the World Grand Prix after that, and obviously I've got one eye on the World Championship.

"I wouldn't say I'm the best player in the world now, but I believe that my A-game is better than anybody else's. That's all that matters, I'm confident with my own game."

MVG-Wright-Price style question but with a twist.

If you knew you were going to be in the World Championship final but had to play one of the 'big three', who would you rather it be? Consider all factors, not just current form.

"It hurts," admitted Cross, who will enjoy his 30th birthday on Monday. "I lost to an in-form guy tonight and he's been playing the darts of his life. Fair play to Gezzy for winning. Maybe with the lead I did have, I just got a little bit complacent.

"I've always got the game in the locker. I didn't feel great when I played James and he never really got going, but it's a step in the right direction.

"The darts are perfect for me and everything's perfect, it's just about Rob believing. I'm bitterly disappointed, but I'll go back on the practice board, work harder and come back stronger."

Incredible from Gerwyn Price. Looked unbeatable v Wright earlier when averaging 100+ for the eighth time in his last nine matches but then needed all of his character to come from 8-4 down to beat Cross.

That's three titles and 17 wins in a row and averaging 100 across the lot. pic.twitter.com/pos30tagQ9

Gerwyn Price further underlined just why he's just as big a threat to Michael van Gerwen's world number one status as Peter Wright, with a stunning 11-6 victory over Snakebite.

While this is obviously an unranked event, it maintained a hot streak of form that will surely put him in the reckoning for more big titles heading into the winter months.

The two-time Grand Slam of Darts champion headed to Austria having won back-to-back tournaments at the Autumn Series and now he's into his third final in a row thanks to his 16th match win in a row.

His cumulative average during this winning streak is 100 while the 102.48 that he posted against Wright was the 10th time in his last 13 matches that he'd averaged 100 or more.

But this match summed up why we should never take the statistics at face value, as the world champion averaged of 108.1, hit five more 180s with nine and was slightly more clinical on his doubles with 50%.

Price's all-round game peaked at the most crucial times, however, and made three 100+ checkouts including a fabulous effort from 100 in the 15th leg that was made up of single 20 and a pair of double tops.

❄️ The Iceman averaged 102 himself in a brilliant match as he reaches the climax of the World Series of Darts Finalspic.twitter.com/EG2wLG22zd

Wright, who was chasing his second TV title of the season having also won the Masters back in February, landed the highest checkout of the match of 130 - and also another of 116 - but his efforts were somehow not enough to get even close.

A beauty from Wright...

A 130 checkout and a twelve dart leg from the World Champion to close the gap to two at 4-2. #WSF2020 pic.twitter.com/IyxcQG8MXn

The second semi-final was a comparatively turgid affair, with Rob Cross battling past James Wade 11-7 to reach his 11th televised final since the start of 2017.

The former world champion and 2019 World Matchplay winner, who has been short of form since darts resumed back in July, averaged just 85.28 compared to the Machine's 87.58 in a match which featured just one maximum apiece but he was at least better on his doubles, as he pinned 11 from his 26 as his opponent spurned 19 of his 26.

Wade did at least manage to thrill the fans with his second 170 checkout of the day having also achieved the feat against Glen Durrant in the quarter-finals.

James Wade lands his second 170 checkout of the day to trail 7-6 against Rob Cross.

Two of the four quarter-final matches on Sunday afternoon went to deciding legs as Gerwyn Price and James Wade held their nerves to edge out Nathan Aspinall and Glen Durrant respectively.

The Iceman clash with Aspinall was a real thriller, with both players averaging over 100 although it had looked like the Stockport star would triumph when he opened up a 7-4 lead with a superb 100 checkout that completed a 12-dart leg.

Price, who'd fired in a 148 during the early stages of this high-quality showdown, bounced back with four legs on the spot to move 8-7 up but Aspinall stopped the rot to level things up at eight apiece.

You've gotta love Price v Aspinall matches. Intense, high standard and whoever wins can give it some with their celebrations knowing their opponent will take it in great spirit without a sulk. No wonder they love playing each other.pic.twitter.com/J0XHTHN2Mo

After responding to Price's 11-darter with one of his own to force a decider, the 2019 UK Open spurned one chance at double 18 and was duly punished by the Welshman.

Wade, who won this title two years ago, saw off Premier League table-topper Duzza in another absorbing affair that went to the wire.

The Machine averaged 99 compared to Durrant's 102.4 but his finishing was far more clinical, with an early 170 checkout in the fourth leg setting the tone.

James Wade takes out the biggest checkout of the lot - a 170 - as he draws level with Glen Durrant at 2-2 pic.twitter.com/3muuafzFX6

Neither player led by more than one leg until Wade edged 8-6 clear although that advantage was to be short-lived when the three-time Lakeside champion took the next two, with the help of a 97 checkout in the 16th.

At 9-9, Wade threw just his third 180 - compared to his opponent's seven - to get his nose in front and soon later pinned tops with Duzza waiting on 122.

Rob Cross overcame Michael Smith 10-8 in another keenly-fought quarter-final that saw a combined 15 maximums to entertain the Salzburg fans.

Voltage hit six of them but it was his near 50% checkout percentage that was the key behind his 98.67 average as Bully Boy once again struggled on the outer ring.

Smith fired in nine 180s and averaged 98, which would have been far higher had he not spurned 20 of his 28 attempts at doubles.

Peter Wright was the first player through to the semi-finals as he coasted to a 10-5 triumph over Daryl Gurney.

The world champion's average of 100.23 was only marginally better than SuperChin's 99.39 but he scored more consistently at the key times and hit 40% of his doubles compared to his opponent's 36%.

Seeded players entered in round two on Saturday and play winners of Friday's first round.