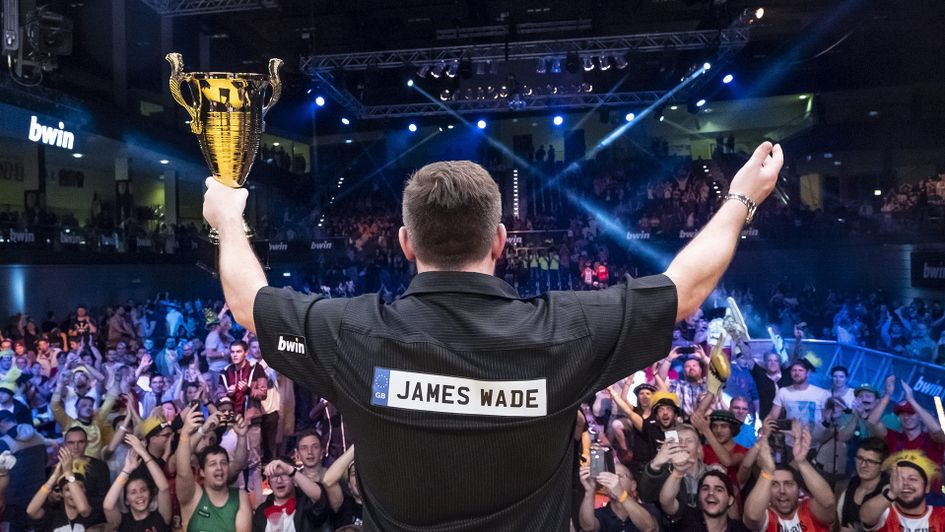 James Wade completed a quickfire TV double as he beat Michael Smith 11-10 to win the World Series of Darts Finals.

One week on from ending his near five-year wait for a TV title at the European Championship, Wade went in again as he got the better of Smith in an epic duel for the trophy and the £50,000 top prize in Vienna.

Wade looked to have finally broken the back of his opponent when he broke to lead 10-9, but after two missed darts for the match having earlier bust 121, Smith stepped in to force a deciding leg - one in which he would throw first.

Throughout the leg, Smith held the advantage and a timely maximum took him down to 46 with Wade languishing well behind.

Smith missed two darts for the match but after Wade could not take out 141, the former world youth champion returned for three more attempts, missing double 20, then double 10 and finally double five as a golden opportunity went begging.

Wade needed no second invitation and hit double 18 with his first attempt to win the title, stealing it from a shell-shocked and visibly emotional Smith, who had earlier hit a 170 finish in what was a high-class encounter.

Wade, who became a father for the first time 13 days before his European Championship triumph, averaged 97, hit five 180s , converted over 52% of his doubles and made two 100+ checkouts.

He said: "This is another win for Arthur, I couldn't be happier right now. I threw it away but then Michael did the same and I was very grateful for my second chance to win that game.

"Last week I had the biggest amount of luck in the world and I did again this week with players missing darts at double against me but I made the most of it again.

"Going into the semi-final with Raymond [van Barneveld] I said to myself 'come on, you are up for this' and I kept that focus all the way through to win it."

Smith, the 2018 Premier League Darts runner-up, averaged 99, hit five maximums and hit three 100+ checkouts including the big fish but was left to rue those missed darts for the match.

😲🙌🎯 Incredible drama at the end of the World Series of Darts Finals!

One week on from his success at the European Championships, Wade took his performance levels to another place altogether with an 11-2 demolition job on the former world champion, who had earlier seen off Michael van Gerwen.

It was in fact van Barneveld who started best, throwing a maximum on his very first visit and requiring just 10 more darts to wrap up the first leg.

The Dutchman then took control of the second leg against the darts, before Wade stepped in for a clinical 160 finish and the first of what would be eight legs in succession.

A FANTASTIC 160 FROM JAMES WADE 🎯 pic.twitter.com/sJHEfYlGNc

The left-hander took out 124 for 5-1, won the next two legs in 13 darts apiece and then hurled in a 141 checkout for 8-1, before van Barneveld stopped the rot heading to the interval.

Wade resumed with a break of throw before holding to move within one of the match, a leg he took with another break of throw to complete the most straightforward of victories.

Smith took out 126 for an 11-8 win which was more tense than it need have been after he'd opened up a commanding 10-5 lead with a dominant spell in the middle of the match.

The former world youth champion missed a succession of match darts from that point while Price kept his hopes alive with a classy 116 finish as he flirted with what would have been an astounding comeback.