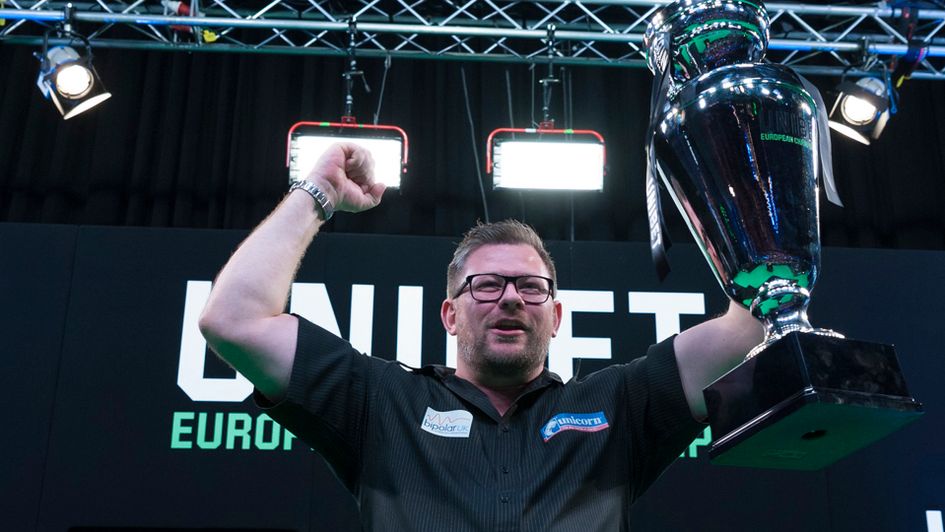 James Wade ended a near five-year wait for his eighth major PDC televised title after defeating Simon Whitlock 11-8 in the European Championship final.

The Machine's last major title came back at the Masters in 2014 while you have to go back to 2011 when he celebrated a TV ranking tournament at the UK Open.

Whitlock was also aiming to end a major drought, with his sole taste of success coming in this tournament back in 2012, while both players came into the match fresh from pulling off thrilling comebacks to beat Joe Cullen and Max Hopp in final-leg deciders (scroll down for semi-final details).

The Wizard, playing in his seventh major final and first since the 2017 World Grand Prix, looked in good shape early on at 3-1 up but after Wade bounced back to level matters at 3-3, neither player would open up more than a one-leg lead until the Englishman reeled off three on the bounce from 8-8, including a pair of 13-darters to seal his victory.

Wade has endured a lean period in his career since his heady days of winning the World Matchplay (2007), World Grand Prix (2007, 2010), Premier League (2009) and the first of his two UK Opens in 2008 but recently insisted he's enjoying his darts again and ready to challenge following the birth of his first child Arthur 13 days previously.

And after this title triumph, he told www.pdc.tv: "That was for my son, Arthur. I'm actually emotional about this - it's an amazing feeling and I'm going to enjoy this win.

"It's not often that I am lost for words but I am after this. I've shown that I'm dangerous and everyone needs to watch out.

"Today I went into every game battling. I’ve been a lucky boy but perhaps that makes up for some of the misfortune I’ve had in recent years, and it’s a step in the right direction."

Wade let himself down during his three prior major TV appearances in 2018 at the UK Open, World Matchplay and World Grand Prix but he's also shown signs of returning to title-winning form by reaching two finals on the European Tour in Sindelfingen and Goettingen as well as two on the Pro Tour finals

As well as having his eyes on more big prizes, the 35-year-old Englishman, who hadn't won a tournament of any kind since the European Darts Matchplay back in 2016, will hope to regain his place in the Premier League line-up for 2019 having been cut from this year's edition.

“I’ve won TV titles before and I’ve never made the most of it, but tonight was special - this one is for Arthur.”

The tournament was also a profitable one for followers of Chris Hammer's darts tips. He backed Joe Cullen at 7/1 to win his quarter of the draw and also took the 10/3 that anyone from the bottom half of the draw would lift the trophy. Click here to read.

🤖👶👏 James Wade puts his return to the winners' enclosure down to the arrival of his son, Arthur!

Simon Whitlock came back from the brink of defeat to beat Joe Cullen 11-10 in an epic European Championship semi-final in Dortmund.

The Australian was in deep trouble as the Rockstar led 10-7 to move one leg away from his first major PDC televised final but Whitlock reeled off the next three legs to force a decider.

Cullen, who seemed to struggle with the pressure as his lead was whittled away, reached a finish first on 83 but ended up missing a match dart at double nine before the 2012 European champion punished him with a 110 checkout.

Whitlock, who was also the 2013 European Championship runner-up, is now aiming to win the second major of his career in his seventh final.

🎯👏 Simon Whitlock, what a comeback!

🧙‍♂️ The Wizard is into the European Championship final! pic.twitter.com/5BZGf0dwX0

He said: "I'm the happiest man in the world right now. I'm absolutely buzzing. I'm over the moon to win a game like that and this means so much to me - it feels amazing.

"I feel for Joe, he played some great darts but at 10-7 I relaxed and threw some good darts to get back into it. The pressure was back in the last leg but that 110 finish was sweet.

"It's a moment I'll never forget."

Whitlock will now meet James Wade, who also produced a stirring comeback to deny Max Hopp yet another historic victory in front of his own fans.

The Machine trailed 7-3 and 10-8 before winning the next three legs on the trot as Hopp agonisingly missed three match darts which would have sent the Westfalenhalle crowd into ecstasy.

Wade, who recently became a father, is now bidding to win his sixth PDC televised major almost five years after his last at the 2014 Masters.

Both players averaged 94 but while Hopp edged the maximum count 5-4, it was Wade who was more clinical on his doubles, hitting 11 of his 21 attempts compared to his opponent's 10 from 23.

The former World Youth champion, now 22, made a flying start to the match with a pair of 126 checkouts to complete 12-darters in two of the opening three legs and as he continued to pull away, it looked as though he'd become the first German to reach a televised PDC major final.

He'd already become the first from his country to reach a quarter-final, let alone a semi, but he couldn't quite get himself over the line as Wade silenced the raucous crowd.

Nevertheless the 22-year-old, who won his maiden senior PDC tournament on home soil in a European Tour event back in April before collecting his second on the Pro Tour last month, can take much confidence from another standout weekend in his career.

Joe Cullen produced an astonishing comeback to beat world champion Rob Cross and reach the semi-finals of the European Championship.

Trailing 6-1 and seemingly on his way out of the competition, the Welshman won seven legs in succession to turn the match on its head.

Cross, the 2017 runner-up, responded to force Cullen to throw for the match at 9-8 but again he had the answers, defying a slow start to the leg with six darts from 196 for the biggest victory of his career.

It was good news for followers of Chris Hammer's advice, our darts expert having advised Cullen to win his quarter pre-tournament before selecting him to go all the way at 10/1 in his Sunday preview which also included a winning 10/1 acca and best bets of 6/5 and and 7/2.

"You're fearing the worst at 6-1 but I felt that I had to stick in there," admitted Cullen. "I knew that Rob wasn't playing well even though he was 6-1 up.

"It was a game of two halves, as the scorelines suggested, and the 111 was massive in the context of the match.

"I've been giving myself the chances in recent weeks but not been taking them. I believe in myself but I'm not going to get ahead of myself.

"I'm not looking any further ahead than Simon (Whitlock) in the semi-finals. If I can take it one leg at a time then the rest will take care of itself."

😲 Not a problem for Joe Cullen, who will play in his first major semi-final tonight!pic.twitter.com/Gn997IZBqu

Simon Whitlock awaits in the last four having continued his challenge for a second victory in the evening by defeating Steve West 10-7.

Whitlock's finishing proved the difference as both players averaged over 100 and West landed nine 180s, only to see the Australian check out ten doubles from 15 attempts.

After West took the opening leg with a break of throw, Whitlock finished a superb 164 checkout as he moved 4-1 up.

West finished 100 and an 11-darter as he pulled back to 8-5, but Whitlock landed a crucial 144 checkout before finishing 65 to seal his last four spot.

"I'm really pumped up and I'm feeling confident," said Whitlock. "This is my favourite event, it's the only TV event that I've won and I love it.

"I know my game is a lot better than I showed here, but I won and that's the main thing. My finishing was great, though."

On the other side of the draw, home hopes appear strong after Max Hopp thumped Darren Webster 10-5.

HE'S AT IT AGAIN!

Max Hopp with a 164 to raise the roof in Dortmund! The young German takes a 3-2 lead into the first break against Darren Webster. pic.twitter.com/RYcgTjvsG3

A day after an epic win over James Wilson, Hopp checked out 126 to take a 2-0 lead only for Webster to level, before the young German fired in a stunning 164 checkout for a 12-dart leg and a 3-2 lead.

Webster, tenacious as ever, again rallied and in fact led when his 14th dart of the ninth leg found double 16, but that would be his final flourish as Hopp took the game away from him thereafter.

Another high checkout - this time a 124 - saw him take the lead and from there he was able to cruise into the semi-finals.

Standing in the way of a place in the final is James Wade, who beat Gerwyn Price 10-9 in a thriller to round-off the afternoon action.

Both players missed match darts but after the third of Price's opportunities landed the wrong side of the wire, The Machine stepped in to hit double 20 and progress.

📽 "The doubles made me a winner at the end. I had some good high finishes."

CLICK HERE FOR OUR NIGHT ONE REVIEW, HIGHLIGHTS & STATS