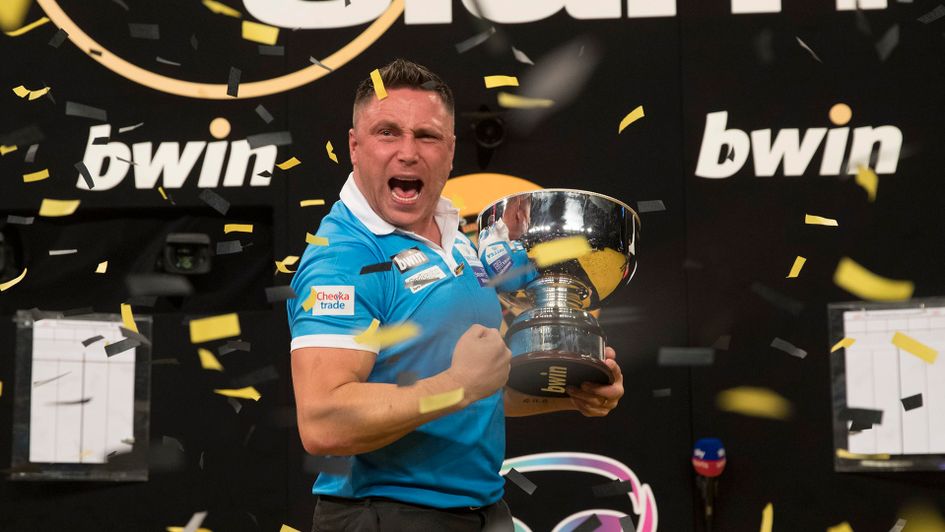 Gerwyn Price triumphed in one of the most heated darts finals of all time as he defeated Gary Anderson 16-13 to win the Grand Slam of Darts.

The Welshman headed to Wolverhampton last weekend as a 50/1 outsider to claim his first major televised title but found himself in his second big final - and first since the 2017 UK Open - after two incredible comebacks against Simon Whitlock and Mensur Suljovic.

Price was still a big underdog to defeat Anderson, who had earlier ended Michael van Gerwen's reign as three-time defending champion as he chased this title for the first time in his illustrious career.

But yet again his fighting characteristics and bellowing celebrations came to the fore amidst what became a bear pit atmosphere inside the Aldersley Leisure Village and although it was nearly all in support of Anderson, the Iceman thrived on it like a true pantomime villain.

The Flying Scotsman was frequently wound up by Price's histrionics on the oche, especially when he lost four legs on the trot from being 7-4 up, but he looked to have regained his composure when storming into an 11-8 lead thanks to successive finishes of 72 (on the bull), 84 and 144.

Anderson was beginning to enjoy in the atmosphere again when going 13-11 but after Price got it to 13-12, he didn't have another dart at a double as the pumped up former rugby player, who took up darts in 2014, ran away with the next three legs.

A chorus of boos rang during his moment of triumph and the trophy presentation, which saw him become the first man to lift the newly-named Eric Bristow trophy and claim the £110,000 prize.

Scroll down for reaction, final statistics, and semi-final round-up

🏆🎯 Gerwyn Price is the first man to lift the Eric Bristow Trophy, amid a chorus of boos.

The result will be a great disappointment to Anderson, who was hoping to add a another elusive TV major to his CV for the fourth time this season having bagged his maiden UK Open, World Matchplay and Champions League titles in 2018.

Afterwards Price told Sky Sports: "I'm throwing my darts, he needs to wait for his turn. He doesn't like it I'm a little bit up him, unlucky. He can't handle playing me, he just moans all the time and he needs to focus on his own game. I was chasing the game all the way through but I knew if I put him under pressure he would crack and he did. I will go down in history as the player to win the Eric Bristow trophy - it means a lot to me."

Later he added on www.pdc.tv: "I've got over the winning line and I'm thrilled to bits. It was an up and down final but I knew that if I stuck in there I'd get my chances, and I took them. I was pretty confident at the beginning of the week and I knew that I had a good chance of reaching the final, but I was chasing Gary all the way there.

"He wasn't playing brilliantly, he was being consistent at what he does. I knew if I just put it up one gear that I'd beat him. I knew that he doesn't like the way I play. My game is my game, he just needs to concentrate on his own. I've won the tournament and I'm over the moon."

Price added: "I'm the first person to win the Eric Bristow Trophy and that means a huge amount to me - it's something nobody can ever take from me."

“I know Gary doesn’t like the way I play but my game is my game.”

Click here for detailed stats from our final day blog

Michael van Gerwen's three-year reign as Grand Slam of Darts champion came to an end as Gary Anderson defeated his great rival 16-12 in a compelling semi-final on Sunday afternoon.

The world number one had been chasing a record fourth successive title to move two behind the great Phil Taylor, who beat Anderson in the Scotsman's only previous Wolverhampton final in 2011, but he wasn't close enough to his best form and was duly punished.

🤔 Can he now go and win the Grand Slam of Darts title for the first time in his incredible career?pic.twitter.com/GJWTqCBiwo

Anderson's scoring power was stronger as he hit nine 180s and averaged 103 while his finishing was also superior, pinning 16 of his 33 double attempts and weighing in with five 100+ checkouts, including a match-clinching 104.

Van Gerwen, who averaged 99, hit seven 180s and missed 18 doubles, led 3-1 early on but once Anderson pulled level there was very little between the pair until the world number four landed checkouts of 112 and 118 to go 11-8 up.

MVG showed his spark when reeling off 14, 11 and 12 dart legs thanks to 100 and 124 checkouts in the latter two as he drew level at 11-11 but it only proved to be a false dawn however as away stormed the Flying Scotsman again to take five of the next six legs.

That said, although the doubters of his dominance are again circling, he has still won 18 titles in 2018 including the Masters, Premier League and last month's World Grand Prix.

Gerwyn Price will face Anderson in the final after the fiery Iceman produced a stunning comeback to sink Mensur Suljovic 16-12 earlier in the afternoon.

Price had hit a 170 checkout early on but was as big as 14/1 when Suljovic, who was averaging 106, hit his 10th double out of just 13 attempts to lead 10-5 but somehow the match got turned on its head from nowhere.

The Welshman drew on his experience of trailing 9-5 against Simon Whitlock in their epic quarter-final as he quickly picked up some much-needed momentum and that nicely coincided with Suljovic suddenly making doubles look harder than he'd previously made look easy.

Price pulled back to 10-9 and although the Gentle edged away again at 12-9, the 2017 UK Open finalist kept digging away and three legs later a remarkable 10-darter levelled the match.

The 33-year-old former rugby union player continued to flex his muscles - and his vocal chords - with another three legs on the bounce to claim the biggest win of his career.