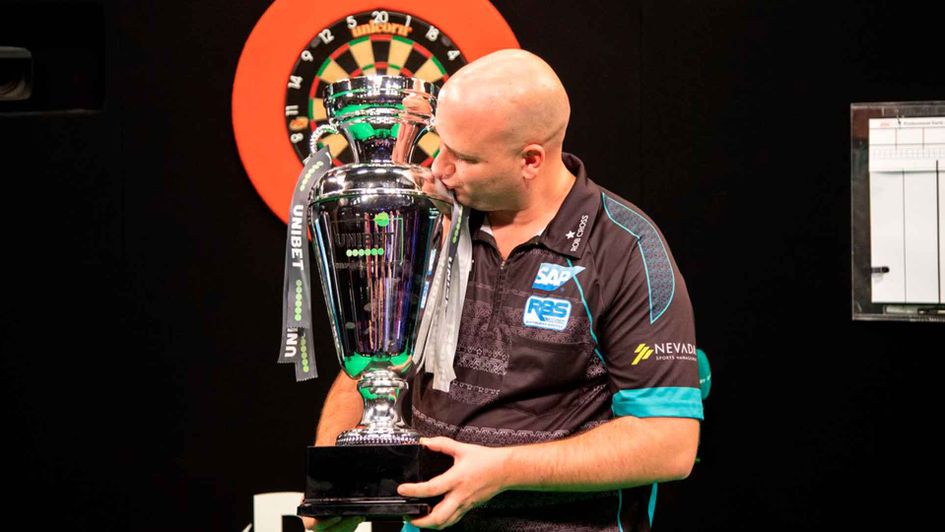 The 2018 World Champion, who also won the second biggest prize in darts earlier this year at the World Matchplay, beat Ricky Evans and Daryl Gurney earlier in the day to reach his sixth final before a largely one-sided triumph over a seemingly mentally fatigued Iceman.

Cross never looked back in this contest after opening up a 5-3 lead before back-to-backs legs of 13 and 14 darts gave the struggling Welshman a mountain to climb that he never came close to overcoming.

Cross, who was runner-up in his two of his other six major finals at this year's UK Open and Premier League, told www.pdc.tv: “I’m here to be number one in the world. I don’t play to make up the numbers and I believe I will be number one at some point. In fairness to Gerwyn he wasn't his normal self in the final but I'm delighted to walk away with this title.

"It’s also another learning experience for me, they're long gruelling days and I’m happy to prove that I can win matches with a C or B game now.

"I’m playing great, I’m having to dig deep at times and I’m more feeling like myself. It’s amazing and it’s everything I wanted it to be."

This victory also sees him snap a four-match losing streak against Price, who beat him at last weekend's Champions League of Darts and the International Darts Open final on the European Tour.

Still a pantomime villain with the crowds due to the last time he appeared in a televised final at the Grand Slam of Darts, in which he controversially beat Gary Anderson of course, Price appeared upset with the treatment he received from the fans this weekend when interviewed during the post-match trophy presentation.

It is harsh considering the standard of darts he's produced all this season and his undoubted entertainment value, but his poor performance in the final was perhaps more down to mental fatigue after a gruelling day in which he'd previously beaten Vincent van der Voort in a thriller before battling past Michael Smith in the second of the evening's semi-finals.

While he's left to rue an opportunity to claim his second big title in his third final, Cross has now collected four televised trophies in total, including a World Series event in Brisbane last year, while he takes his career tally of PDC titles to nine.

He'll now head into the remaining majors of a hectic winter - the World Series of Darts Finals, Grand Slam of Darts, Players Championship Finals and of course the World Championship - in bullish mood of more glory.

🗣 Hear from your 2019 @unibet European Championship winner @RobCross180 after his 11-6 victory over Gerwyn Price in the final! pic.twitter.com/iZU15C47rp

Rob Cross reached his sixth major televised final as he edged past Daryl Gurney 11-9 in a gruelling battle at the European Championship.

There was never too much daylight between the players after Gurney came back from 2-0 down to level in the early exchanges and when Cross nicked the fifth leg, both players were averaging well over 100.

Voltage would later establish another two-leg advantage at 7-5 only for SuperChin to hit back with checkouts from 76 and 118 before edging ahead for the first time in the contest with another break for an 8-7 lead.

Cross broke straight back for 8-8 and after two successive holds of throw, he went on to take back-to-back legs to end Gurney's hopes of a third major title after his 2017 World Grand Prix and 2018 Players Championship Finals crowns.

🎯⚡️ Rob Cross is into his sixth major final after battling past Daryl Gurney at the European Championship!

🏆 Can he now bag his third big title?pic.twitter.com/fazQCYtN4A

The 29-year-old will now meet Gerwyn Price, who stormed into his third major final with an 11-7 victory over Michael Smith.

Although the Iceman has been in sensational form in 2019 by winning four ProTour titles and two semi-final runs in TV events, this will be the first time he's played for a major trophy since his controversial Grand Slam of Darts final against Gary Anderson last year.

The 2017 UK Open runner-up will have no concerns taking on Cross for the chance of a third big trophy having beaten in him in their last four meetings, including last weekend's Champions League of Darts and the International Darts Open final on the European Tour.

Price's 11-darter and a 149 checkout helped him power into a 4-0 lead over Bully Boy, who is still seeking his first major televised title, but after missing four match darts to make it 5-0, the St Helens man began a mini comeback.

Smith won four of the next five legs to square another cracking contest but the Welshman quickly found another gear to win three on the trot, with the help of an 88 finish and a 13-darter.

His opponent squandered four darts from tops to fall 9-6 down and that ultimately proved to be one of the final nails in the coffin as Price went on to seal an 11-7 triumph with an average of 93.2.

💪🎯 Gerwyn Price is into his third major final - and first since last year's controversial Grand Slam of Darts!

Gerwyn Price hit a 170 checkout as he defeated Vincent van der Voort in a thrilling quarter-final in Gottingen.

The crowd were heavily in favour of popular Dutchman, who has been enjoying something of a second wind in his long career, but Price managed to silence them and book his place in the last four.

It was evenly poised when the Iceman landed the 'big fish' to complete a 12-darter for an 8-6 lead and he so nearly repeated the feat in the very next leg only for van der Voort to punish his miss on the bull to close back to within one.

The Dutch Destroyer then edged a scrappy leg to restore parity only for the 2018 Grand Slam of Darts champion to kick back into life with 15 and 13-darters to close out the victory.

He will next play Michael Smith, who made Jeffrey de Zwaan pay for a string of missed darts at doubles to keep alive his hopes of a maiden major title.

The young Dutchman scored brilliant throughout but despite hitting seven 180s, his average was brought down to 96.97 by spurning 19 of his 26 attempts to finish a leg and that ultimately made Smith's life a lot easier.

Bully Boy made just four maximums in his mediocre average - by his standards - of 94.33 and converted 10 of his 25 double attempts during a 10-5 victory featuring a high checkout of 118.

Smith has been runner-up in the 2018 Premier League and World Series of Darts Finals as well as the 2019 World Championship and World Matchplay but he'll be hoping he can break his duck tonight.

Rob Cross was the first player through to the semi-finals after surviving a spirited fightback from Ricky Evans.

Voltage was 5-0 up although he was forced to show character at 7-5 to take the next three legs in succession for a 10-5 victory.

He will next play Daryl Gurney in a repeat of the World Matchplay semi-final after the Northern Irishman produced a superb display to see off Dave Chisnall, who continues to wait for his maiden TV title.

The 2017 World Grand Prix champion and 2018 Players Championship Finals winner will be confident of claiming his third major on the back of this display which saw him 97.07 and hit three 100+ checkouts including one from 164 and a 141 to complete the victory.

GURNEY WINS IT IN STYLE!