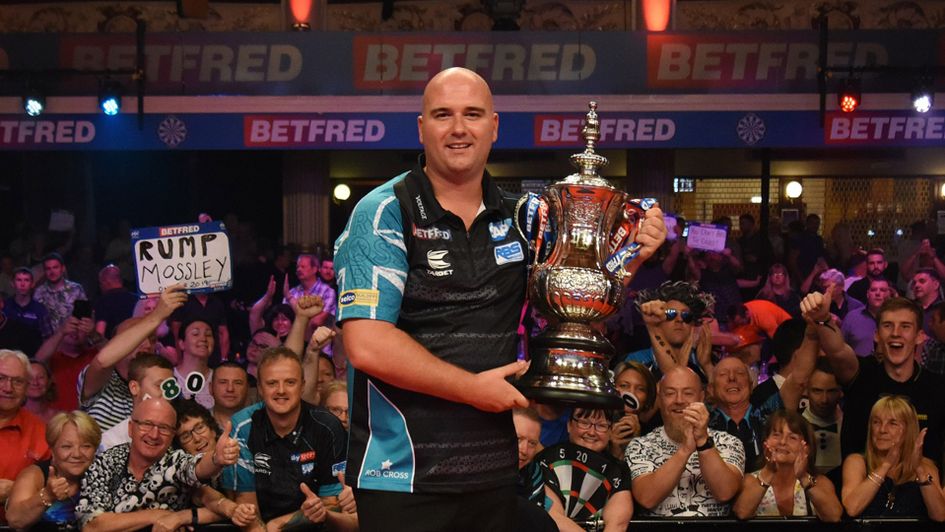 Rob Cross won his second major title after defeating Michael Smith 18-13 in the World Matchplay final at the Winter Gardens.

The 2018 world champion, who is still in just his third year as a professional, has now landed the two biggest prizes in the sport - but had to survive a courageous comeback against Bully Boy to triumph in Blackpool.

👏 The 2018 World champion has now won the two biggest prizes in the sport!pic.twitter.com/aqXgaJTxP2

The damage, albeit largely self-inflicted on Smith's part as the St Helens man made a terrible start and struggled to get anywhere near his best levels, was done in the first half of the match as Cross stormed into a 9-0 lead.

At this stage Voltage, who had come from 14-7 down to pull off one of the greatest comebacks in darting history 24 hours earlier against Daryl Gurney, had won his last 17 legs at the Winter Gardens and was threatening the biggest ever final victory here since Phil Taylor thrashed Terry Jenkins 16-4 back in 2009.

For Rob Cross to have already won the two biggest prizes in darts is incredible when you think this is still just his third season as a pro. Congratulations @RobCross180 pic.twitter.com/sj1XwFk9Ra

However, a rather subdued Blackpool crowd who arrived at the venue expecting a fitting climax to an unforgettable eight days started sensing another miracle turnaround, with the role of Cross now switching from hero to a potential victim.

Supportively ironic cheers greeted Smith when he got his first leg on the board and although he reduced the gap to 11-4 by the end of the third interval, Cross was 1/66 to complete the job amidst the expectation that Bully Boy had left his comeback far too late.

⚡️👌 Rob Cross is seven legs away from World Matchplay glory as he halts the Michael Smith revival with a 115 checkout! pic.twitter.com/Vvif34bM3I

The 2018 Premier League, 2018 World Series of Darts Finals and 2019 World Championship runner-up, who is still seeking his first major title at the age of 28, was gradually lifting his average up to above 90 after that dreadful start and a 147 checkout plus legs of 12, 13 and 12 darts helped stay in touch - relatively speaking of course when you consider when the Cross comeback against Gurney started - at 13-7 down.

🙌 If Michael Smith can produce darts like this for virtually all of the remainder of this final, we could see a second miracle comeback in as many days...pic.twitter.com/XTiLlZ5P0W

Another dominant mini session, including an 11-darter, reduced that deficit to an alarming 14-11 for Cross, but his 14th leg did at least halt the momentum somewhat when he brilliantly checked out from 110 when Smith was waiting for a chance to finish from 16.

That is huge from the former World Champion who takes out 110 on his favoured D18 to regain an element of control in this match pic.twitter.com/l6gNDUjQ76

The pressure cranked up further notches on Cross as Smith closed to within two legs at just 15-13 down. Once again the Winter Gardens crowd roared Voltage's missed doubles - this time six of them - although Smith also spurned five of his own before pinning tops for a 20-darter.

That would be the closest he got as Cross reeled off the next three legs - after surviving darts at the bullseye from Smith in two of them - to become just the fourth player in history to have won both the World Championship and World Matchplay.

As well as picking up a cheque for £150,000, he's also just the ninth player to claim the second most prestigious title in the sport since the tournament began way back in 1994 although that's not a surprisingly low number when the man this trophy is named after won 16 of them (full list can be found further down).

Cross told www.pdc.tv: "It feels amazing. I'm lost for words - so happy that I've won this title. I've loved this place from day one and it's been so special to me. Everything about this tournament is amazing and to walk out with this [trophy] makes it all complete.

"Michael played great darts all week but he struggled on doubles tonight and it made me more edgy. He came back well but I had to stay calm.

"The crowd were amazing, they carried me through yesterday and carried Michael today."

🏆🎯 Rob Cross is just the ninth man to get his hands on the World Matchplay trophy since the tournament began in 1994!

Cross is also celebrating his first title of any kind since the Brisbane Darts Masters in August last year while this was his third major televised final of 2019 having finished second to Nathan Aspinall at the UK Open and Michael van Gerwen on Premier League Finals Night.

Had he won the latter, then tonight's triumph would have obviously seen him complete the Triple Crown of Darts so it may not be too much longer before he joins Taylor, van Gerwen and Anderson in that special group as well.

"I've not played badly this year and I've broken my duck now," he added. "There was pressure because I've lost in two finals this year, so to get over the winning line is huge.

"I need to get a bit more ruthless for the rest of the year. I've got a bit of confidence now and I still feel I can improve, but if I can be consistent"

⚡️🏆 Rob Cross is on cloud nine as he wins his first (of many) World Matchplay title.

For Smith this represents another runners-up prize in a televised major but if he keeps knocking on the door then, like he said in the wake of his quarter-final victory over Mervyn King, the floodgates will surely open for a man of his talents and dedication to practice.

Tonight the former World Youth champion said: "My doubles deserted me tonight. I was constantly chasing and I didn't turn up. Even at 9-0 down I still believed that I was going to win, but you pay the price for being 9-0 down. I proved that I can fight but when I got back in it, my doubles disappeared again.

"My scoring wasn't there and my finishing wasn't, but all credit to Rob because he did a job. I've made another final and it's another runner-up trophy but it won't stop me.

"I'd rather have got beaten in the first round than lose in that final - it hurts less. I'm fuming - I keep making finals but I don't want to be "the nearly man", I want to be the one that wins them."

For a player of such natural talent and dedication to practice as Michael Smith, the floodgates of majors will open once he bags the first. No doubt about it. pic.twitter.com/JSyMAFjWCz

Click here for a full leg-by-leg report and highlights

Routes to the final

Smith stats on the left