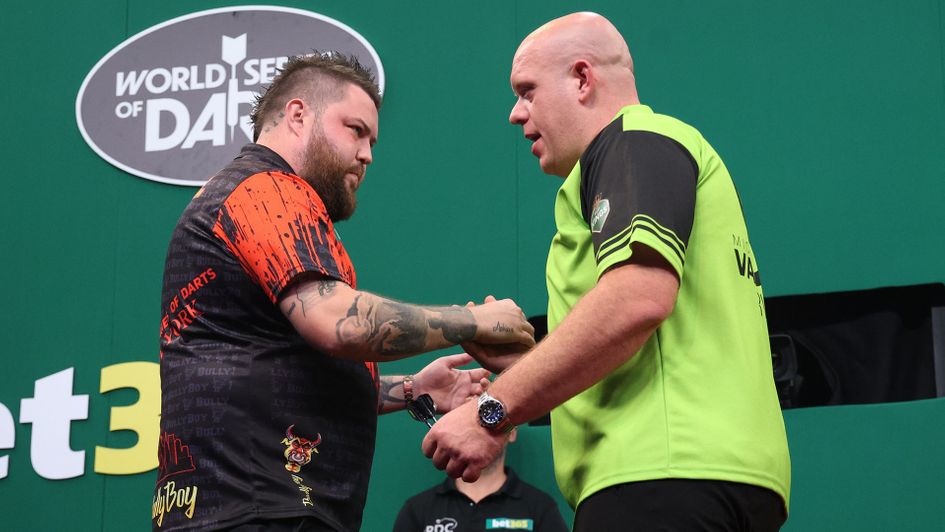 Smith emerged victorious on the second day of the PDC World Series of Darts event in New York, scooping the £20,000 title to end an exciting showcase for the sport.

The Englishman had opened the tournament on Friday with victory over Doug Boehm, and began Saturday's final stages with an 8-3 defeat of Gary Anderson.

He then landed eight 180s in an 8-6 semi-final win over World Champion Peter Wright, before coming from 3-1 and 4-3 down in the final to defeat Van Gerwen with five straight legs.

Van Gerwen had finished 130 in leg seven to restore his advantage, but Smith hit back with a 100 checkout, moved ahead with tops and then produced legs of 14, 14 and 12 darts to wrap up the title.

"I've won tournaments before but it's unreal to win at Madison Square Garden," said Smith. "Everyone wanted to win this event and it's unreal for me to be that person.

"I've just won a tournament in the most iconic venue in the world, and I'm the first person to do it. I'm ecstatic.

"I wasn't playing my best darts, but I put in a decent second half in the final. I did that earlier against Peter too and long may it continue.

"Michael's the same, we're capable of putting in four or five legs on the spin with no reply, and luckily I did."

Hear from an ecstatic Michael Smith after he was crowned the 2022 @bet365 US Darts Masters at @TheGarden! pic.twitter.com/Zq3qlVJhX9

Smith had lost in the World Championship and UK Open finals earlier this year, but has won the final Cazoo Premier League night in Newcastle and a European Tour title in the nine days before his Madison Square Garden success.

"I'm playing well and picking up titles, and it's unreal the way things have swung in my favour," he added.

"Since I won the last night of the Premier League, my confidence has grown and grown. I wasn't chasing results, I was chasing wins and I've just won the first ever tournament at Madison Square Garden.

Van Gerwen followed up Friday's first round win over Jules van Dongen by seeing off James Wade 8-3 in Saturday's quarter-finals.

He then averaged almost 100 in an 8-4 semi-final defeat of Gerwyn Price, but eventually missed out on his second US Darts Masters title.

"Of course I want to win, but Michael played a really good game and you have to take your hat off and say congratulations," said Van Gerwen.

"This is special but I can say that I didn't win, Michael didn't win - I think darts won tonight especially here in America.

"I think this is a massive step forward for the professionalisation of darts in general and the global sport of darts."

Price had reached the semi-finals with a narrow 8-7 win over Jonny Clayton in a sensational all-Welsh semi-final, while Wright was an 8-3 quarter-final winner over Leonard Gates to end American hopes in the event.

Following the success of the PDC's first event at Madison Square Garden, it has been confirmed that the World Series of Darts will return on June 2-3 2023 for the US Darts Masters and North American Championship.

The World Series of Darts continues next weekend with the Viaplay Nordic Darts Masters at Forum Copenhagen on June 10-11. For tickets, visit ticketmaster.dk.