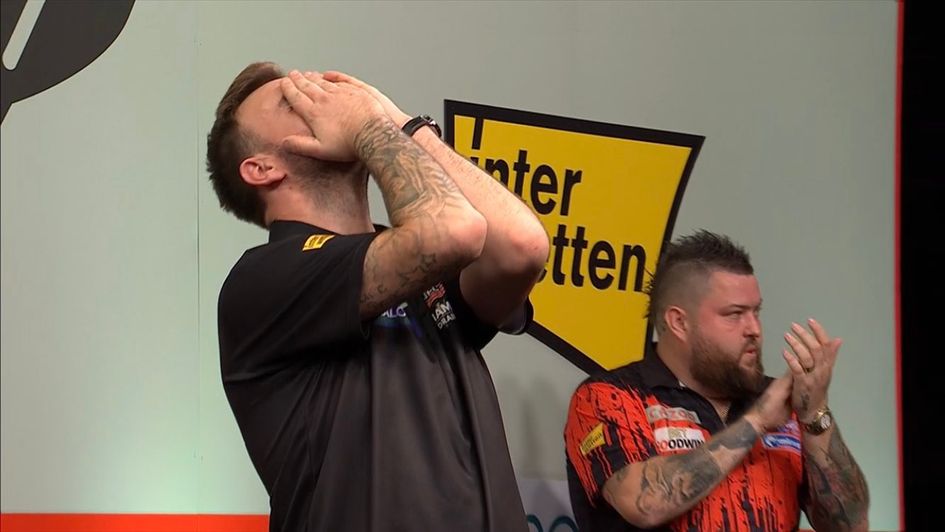 Ross Smith was a shock winner of the European Championship after inflicting more major final misery on Michael Smith with a thrilling 11-8 victory in Dortmund.

The world of darts has been waiting for Bully Boy to win any of the sport's biggest prizes ever since bursting onto the scene as the 2013 World Youth champion, but despite possessing such immense talent, he's now suffered the heartache of losing all eight of his major finals dating back to his 2018 Premier League defeat to Michael van Gerwen.

But despite being favourite like he was against Danny Noppert in March's UK Open final, there was no sign of struggling with the pressure of getting over the line on this occasion - he simply ran into a player who produced the performance of his life in his first ever major final.

"I think I'm dreaming, I have to pinch myself!" said a shocked Smith, whose previous best run at a major tournament was the quarter-finals of the 2019 UK Open. "It hasn't sunk in, it probably won't do for weeks. I've never even won a Euro Tour, never mind a TV tournament.

"I kept telling myself 'just play darts, don't put yourself under any pressure and just throw'. It's a real privilege to play darts on stages like this, in front of crowds like this. I love this game."

What a story. Michael Smith was hot favourite to finally win his maiden major title in his eighth final but Ross Smith does it in his first.

Bully Boy didn't choke - they both played fantastically in a thrilling final and both averaged 100+.pic.twitter.com/lag3MGbKTa

Smith had previously seen off Masters champion Joe Cullen in the first round and Dimitri Van den Bergh - the winner of two World Series events this year - to reach Sunday's final day of action.

He sensationally came from 8-3 down to defeat world champion Peter Wright 10-8 in the quarter-finals before holding off Chris Dobey 11-9 in the semi-finals to give himself a shot at the £120,000 top prize.

THE BIGGEST WIN OF HIS LIFE! 🤯

ROSS SMITH WINS SEVEN LEGS ON THE SPIN TO DEFEAT THE WORLD CHAMPION!

Incredible drama here in Dortmund as Smith comes from 8-3 down to defeat Peter Wright 10-8 to secure his spot in the semi-finals!

The winnings lifts him up to a career-high 20th on the PDC Order of Merit, and he also qualifies for next month's Cazoo Grand Slam of Darts in Wolverhampton.

The defeated Smith must now lick his wounds once again but the door to major honours must surely be about to fall off its hinges.

Two of his previous final setbacks came on the World Championship stage against MVG in 2019 and Peter Wright at the start of this year, when he received yet more widespread encouragement that his moment of glory was just around the corner.

Much had been made of his improving mental strength, which helped him overcome Gerwyn Price and Jonny Clayton in epic matches during his Ally Pally run, but the agonising nature of his aforementioned 11-10 defeat to Noppert in Minehead made people question whether those battle scars are proving to be painful to heal.

But it didn't take him long to bounce back with four more titles - including revenge over Noppert in the Dutch Darts Masters and a second World Series crown at the televised US Darts Masters back in June, where he defeated van Gerwen 8-5 in the final.

The 32-year-old, who defeated rising stars Josh Rock and Luke Humphries with inspired performances this weekend before edging out Dirk van Duijvenbode in the semi-finals, didn't show the slightest sign of complacency against his fellow Englishman and pinned almost 50% of his double attempts.

The St Helens thrower, who was also runner-up at the 2019 World Matchplay and the 2018 World Series of Darts Finals, was in philosophical mood afterwards.

He said: "Every time Ross was on a ton-plus finish he was pinning it, fair play to him - he did what he needed to do to win. My scoring wasn't the best but I wasn't too upset with myself at how I played. It's starting to become annoying [losing TV ranking finals] but I'll get there eventually.

"I've just got to keep going, keep believing and keep doing what I'm doing. Maybe I will win the next one, or the one after that. We'll see."