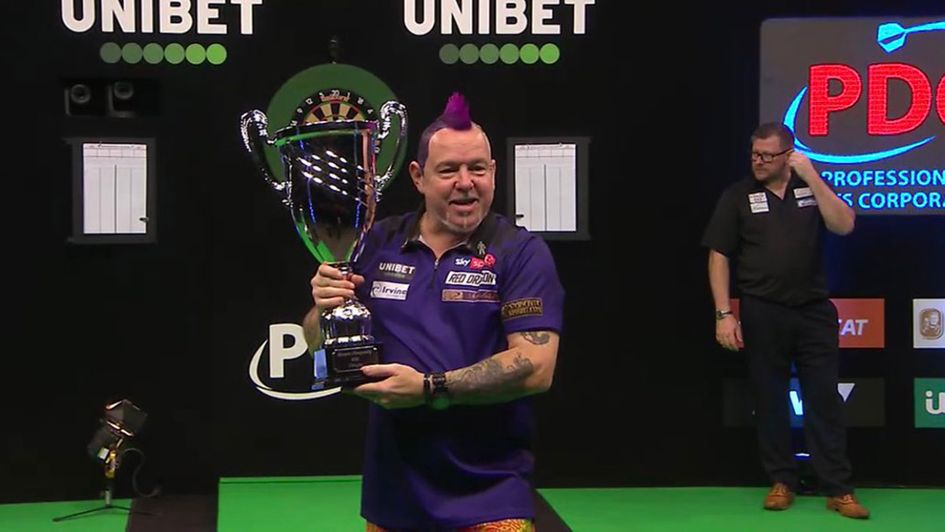 Peter Wright added the Unibet European Championship to his glittering CV with a superb 11-4 victory over James Wade in Oberhausen.

In a career that continues to go from strength to strength at the age of 50, the 2020 world champion now has four major individual titles among his overall PDC tally of 33 but three of those have come in 2020, starting with his Ally Pally heroics against Michael van Gerwen at the very start of January.

Snakebite, who also won the Masters in February and the 2017 UK Open, was in blistering form throughout the whole tournament, averaging over 102 in all five of his games and ending with an overall mark of 103.3.

Peter Wright's European success is his fourth major title, third of the season and first since turning 50.

He averaged over 102 in all five of his games and around 104 for the tournament.pic.twitter.com/go4H4JvESH

Having overcome Jonny Clayton 11-8 in a much closer semi-final earlier in the evening, Wright averaged 104.33 against the Machine thanks to an imperious display which included six of the seven 180s and a pair of 100+ checkouts that came in the final two legs of the match - a 143 break followed by a title-clinching 125.

🙌🐍 Peter Wright now has four major titles in a career that goes from strength to strength at the age of 50!

Huge body blow for James Wade as Wright takes out a stunning 143 finish to move to within one leg of the title! pic.twitter.com/8w6BpGSiid

Wade was bidding for his second European title and 11th major having won it two years ago but apart from a 121 checkout that helped him bounce back from 4-1 down to trail 4-3, he struggled to put enough pressure on the rampant Wright.

The Machine, who averaged 95.28 spurned one dart at tops to level the match at 4-4, while his later misses at the outer ring didn't come until he was 8-4 and 9-4 behind.

Wright won six of his 11 legs in 13 darts or fewer and if he can maintain this kind of form for the rest of the season, he could feasibly end it as world number one.

The Scotsman told www.pdc.tv: "I'm delighted to win, it's great for me and it was good to have the fans here. It's the first final I've got to in the event, I've had a couple and managed to win it. I struggled in the semi-final, it was probably my toughest match and I couldn't get going but I got away with it.

"James has won this before and is a quality player, so to get the win I'm really happy. He can reel off legs so you've got to try and keep him at bay, and luckily enough I did."

Wright had withdrawn from the two European Tour events ahead of the European Championship, but said: "It was good to have a little rest and recharge the batteries, I knew what I needed to do to prepare for this."

Snakebite has also changed his stance slightly with more of a lean towards the board and he said: "Everyone's different but it worked for me. I believe I can be more consistent and I will be playing a lot better than that. I think I can hit some big averages.

"I feel good with my darts and with the way I'm standing but I think I can get better."

Earlier, Snakebite booked his place in a 16th 'major' final - and 22nd overall on TV - by staging a superb comeback against Clayton.

WRIGHT IS IN THE FINAL! 🐍

Peter Wright averages over 102 as he secures his spot in tonight's final after a hard-fought 11-8 victory over Jonny Clayton!

Wright trailed 7-5 against the impressive Ferret, who was chasing his maiden TV title, but showed tremendous character to win six of the next seven legs in a match of real quality.

However, Clayton will rue the costly miscount that occurred at 9-8 down, when he thought he was going for a 101 checkout rather than 110, and Wright made him pay to move one away from victory.

Jonny Clayton will be kicking himself as he miscounts for a 111 finish, allowing Peter Wright back to board and he makes no mistake in moving to within one of victory... pic.twitter.com/5dhkE7PtXm

Wade reached his second European Championship final with a trademark Machine-like performance in a thrilling clash against the brilliant Devon Petersen that went to a deciding leg.

The 2018 champion defied the South African's heavy scoring, superior average and barrage of 180s with the same brilliant timing and ruthless finishing at the crunch stages that has served him so well throughout his career, before holding his nerve just when it looked like he'd lost momentum.

🤖 James Wade is into his 25th televised darts final with a trademark Machine performance!

⏱️ His timing and finishing defied Devon Petersen's barrage of 180s as he won a thrilling clash 11-10 at the European Championship.pic.twitter.com/EK5JsTnSwg

Wade looked in real trouble at 8-6 down only to win the next three legs before landing a tremendous 158 checkout to move 10-8 up and onto the brink of victory.

Incredible finishing there as James Wade takes out a massive 158 to go within one of a spot in the final... pic.twitter.com/BBLfXRZbUg

Petersen refused to give in and promptly broke back with a 106 finish before holding his own throw to force a decider and although Wade had the advantage of throw, it looked as though the recent German Darts Championship winner was storming towards the finishing line.

The 34-year-old has been one of the world's biggest scoring players in a remarkable breakthrough season but he could only muster one score above 100 with the pressure of a first TV title on the line and was unable to get a shot at a double as Wade clinched it in 15 darts.

The pair both produced three 100+ checkouts apiece, with two of the African Warrior's efforts coming in the opening three legs.

WOW! No signs of nerves from Devon here as he adds a 127 to his 132 in the previous leg and he breaks throw in 12 darts!

Petersen will definitely be back to challenge at the forthcoming majors and can take a lot of positives from another experience of mixing it with the best on the big stage.