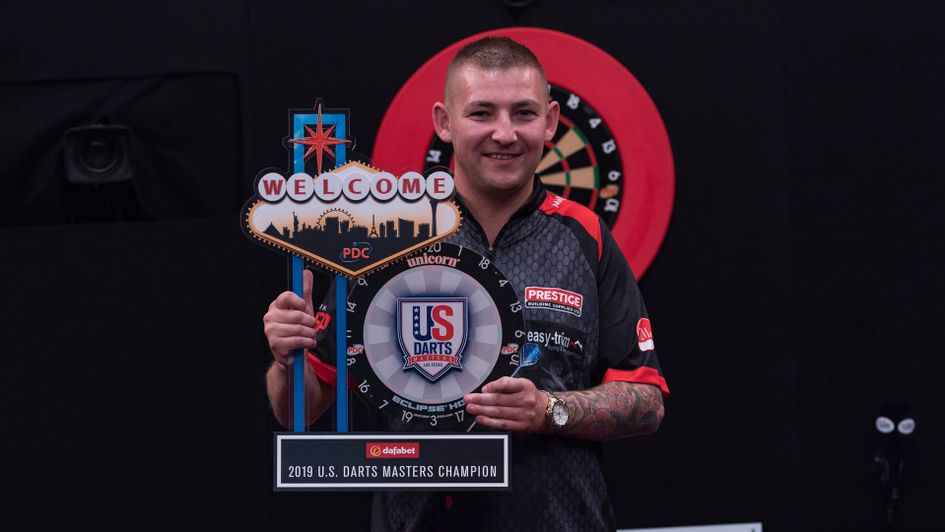 Nathan Aspinall's produced a scintillating display to defeat Michael Smith 8-4 in the final of the US Darts Masters in Las Vegas.

The UK Open champion, who was making his World Series debut virtue of his stunning maiden TV title, produced a personal best televised average of 106.7, hit five 180s and pinned eight of his 11 darts at doubles.

It was a truly special final between the pair that got off to a particularly explosive start, with Aspinall opening up with an incredible 10-darter that included a bounce out while back-to-back 180s with his first two visits of the next made it 15 perfect darts in a row.

However, Bully Boy threw a maximum of his own in this stunning flurry of darts before a 130 checkout completed a 12-darter to level the scores.

The standard of these two legs in the US Darts Masters final!

1st: Eventual champ Nathan Aspinall wins in 10 darts with a bounce out

2nd: Aspinall kicks it off with back-to-back 180s only for Michael Smith to take it in 12 with a 130 checkout! pic.twitter.com/9GQUpXdXD7

The next three legs were shared before the World Championship semi-finalist moved into a 4-2 lead thanks to a 12-darter sealing ton plus finish of his own - this time from 120 - although Smith quickly responded with finishes from 118 and 87 to restore parity.

What a start from Aspinall!

A 120 checkout from The Asp to lead 4-2 at the interval... He's flying in Vegas!#WorldSeries pic.twitter.com/tMUdtY7Ztk

They were the last legs Smith managed to win as the Stockport man, who survived a match dart from Peter Wright in the semi-finals (scroll down for more details on that), blazed towards the finishing line with four legs on the spin without a missed double to seal the second televised title of his ever blossoming career and take home £20,000.

Nathan Aspinall is the 2019 @Dafabet US Darts Masters Champion as he beats Michael Smith 8-4 to clinch the title.

It's the 27-year-old's third PDC title overall having won his first in a Players Championship floor event in 2018 - a year which began with him earning back his Tour Card.

What a performance in the final... 106.70 average and 73% on the doubles as he clinched his second televised title and first on the world series. #WorldSeries pic.twitter.com/0swrjnLQfx

He said: It's absolutely fantastic for me. I played really well in the semis but the way I started in the final was superb. I've never had a performance like that on stage and to do it in the final, I'm a very happy man.

"Growing up you want to play in front of the biggest crowds in the biggest arenas in the best countries. The UK Open was massive for me and I wanted to make a good show of myself coming to Las Vegas - it was the top seven players in the world and me!

"To come out on top and win the whole thing is brilliant. I'm enjoying life, loving my darts and reaping the rewards for the hard work I've been putting in.

"I've had an incredible time in Vegas. The crowd were on my side from the start and gave me brilliant support - and hopefully I'll be here next year to defend my title."

Hear from the 2019 US Darts Masters Champion Nathan Aspinall after his dream debut in Vegas pic.twitter.com/YTXCHyK8CG

Smith, who misses out on a second World Series title having won last year's Shanghai Darts Masters, was happy with his day that began with victory over Michael van Gerwen.

He said: "It's nice to have reached the final but Nathan was too good there. I was chasing it from the start.

"Nathan played really well but I got myself back into it at four-all and that was my chance. Then my first dart started dropping low and I was chasing trebles.

"I played well against Gerwyn Price in the semi-finals and it was nice to get the win there. I've reached the World Championship final, the semi-finals of the UK Open and the final in Las Vegas, so it's not too bad."

Well, Nathan Aspinall just broke his record TV average again (by another two points) in the final.
Not to mention that he won a World Series title on his first attempt. Just incredible. https://t.co/Zw8lj64M7S

Michael Smith followed up his victory over Michael van Gerwen by powering past Gerwyn Price 8-4 to reach the US Darts Masters final.

Bully Boy averaged almost 102 and hit five 180s in a dominant performance as he reached his third PDC final of the season but first on TV since being 2019 World Championship runner-up.

SMITH INTO THE FINAL!

Michael Smith steps into the final of the 2019 US Darts Masters as he beats Gerwyn Price 8-4.

The St Helens man set the tone with an 11-darter in the opening leg and after moving 2-0 up he always kept his nose in front before surging clear at 7-3 after winning another three on the trot.

Price pulled one back before Smith completed the job with a clinical 14-darter to book his spot in the final.

Nathan Aspinall joined him after surviving a match dart against Peter Wright in a dramatic deciding leg.

The UK Open champion, making his World Series debut, trailed 2-0 early on before a stunning 161 checkout helped him draw level at 3-3.

Nathan Aspinall with the biggest checkout of the competition so far with a 161 to level things at 3-3. Game on! #WorldSeries pic.twitter.com/tBkpz5oHSZ

Another big 126 finish was required to level at 6-6 but a missed bull for an 86 checkout in the next leg proved costly as Wright managed to move 7-6 up.

Aspinall loves a bull finish... A big 126 from the UK Open Champion to stay within one of Wright. #WorldSeries pic.twitter.com/HYm4i9dN8x

The Asp dug deep to force a decider and although he initially spurned two darts at tops to take it, his opponent also missed the same target and the Stockport man made no mistake at the third time of asking.

What a win for Nathan Aspinall as he reaches the final of the 2019 US Darts Masters, beating Peter Wright 8-7.

Gerwyn Price ended Gary Anderson's reign as US Darts Masters champion in the quarter-finals as they met for the first time since last year's controversial Grand Slam of Darts final.

The Flying Scotsman was bidding to gain a small measure of revenge for what happened on 'that' night in Wolverhampton when Price claimed his maiden televised title - but once again the Iceman came out on top.

No measure revenge for Gary Anderson tonight as Gerwyn Price (sportingly) wins their first meeting since 'that' final.

He couldn't resist a trademark roar after the handshake though.pic.twitter.com/0pAdbg13C3

This was a much more sporting affair to the one which saw the Welshman slapped with an unprecedented £21,500 fine by the Darts Regulation Authority - which he is currently appealing - and Price fully deserved his battling 8-6 victory.

In a match which featured six 180s apiece, Anderson looked in early trouble when Price opened with 12 and 13 dart leg to go 2-0 up and although he managed to take the next two legs, he fell 4-2 behind after the former rugby player rallied with back-to-back 13 darters.

The Flying Scotsman, who recently won the World Cup of Darts for the first time with Peter Wright, landed six perfect darts in a 12-darter in leg eight to level matters once again before taking the ninth with a 13-darter.

Price, who averaged 99 compared to his opponent's 95, restored parity before Anderson's 106 checkout edged him back ahead but this was the last get he'd win as the Welshman reeled off three on the spin.

Bully Boy was runner-up to MVG at the World Championship and also lost both Premier League encounters during this miserable head-to-head run but now he's stopped the rot.

Van Gerwen was well below his best, averaging just 89, hitting one maximum and missing 12 of his 18 attempts at doubles.

Credit must go to Smith who was 6-4 down at one stage before taking four legs on the spin, including a closing 128 checkout to complete a match-winning 12-darter.

Nathan Aspinall's World Series debut rolled out with an impressive 8-5 victory over Rob Cross in a repeat of the UK Open final.

Nathan Aspinall is flying here as he takes out 121 to lead 3-0. #WorldSeries pic.twitter.com/oDSdnitJys

Aspinall levelled the match before a stunning 10-darter edged him ahead and his job was then made easier when Voltage capitulated on his doubles, missing six in one leg.

Peter Wright booked his place in the US Darts Masters semi-finals with a fine comeback to defeat Daryl Gurney 8-6 in the last of the quarter-final contests.

Northern Irish ace Gurney produced a superb four-leg burst from 2-1 down to move 5-2 up, landing two 13-darters and a 112 finish along the way.

An 11-darter, which featured six perfect darts, from Wright saw him kick-start his challenge, before finishes of 93 and 80 hepled him to move 6-5 up with four straight legs.

Gurney levelled in leg 12, but Wright hit tops to regain the edge before punishing six missed doubles from his rival to complete the win on double 18.