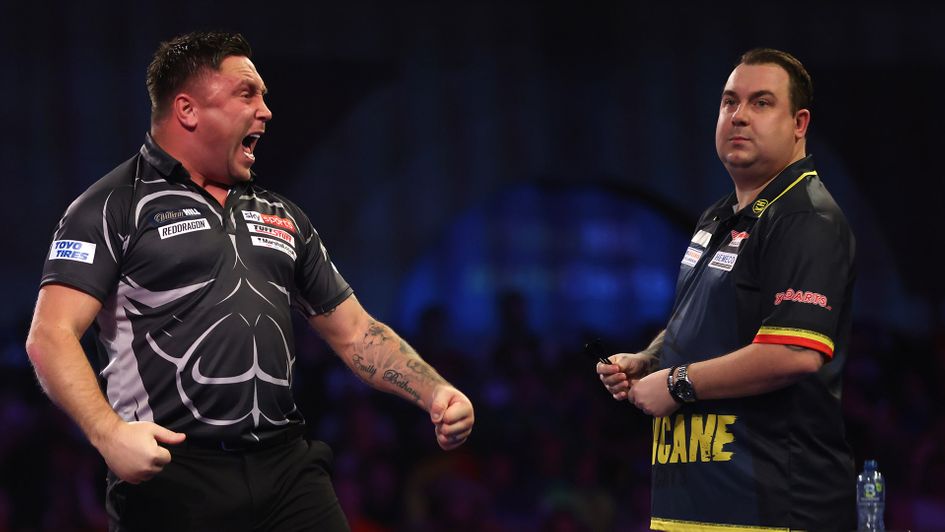 A review of Monday's action at the William Hill World Darts Championship, as Gerwyn Price won a thrilling clash with Kim Huybrechts.

Gerwyn Price defied the crowd and a gutsy performance from Kim Huybrechts to survive the drama of a sudden-death leg at the PDC World Darts Championship.

The Iceman endured a barrage of jeers on his checkout attempts - as well as thousands of cheers whenever he missed his intended trebles and doubles - throughout an absorbing third-round clash as his fired-up opponent whipped up the fans to create an raucous Ally Pally atmosphere.

Incredible effort from Kim Huybrechts and the crowd to knock Gerwyn Price out but in the end the defending champ holds his nerve in a sudden-death leg! Pulsating entertainment 👏pic.twitter.com/mFwQEs5qE6

Price averaged a below-par 92 compared to the Belgian's 93.6 and hit eight of the 17 maximums in the match but he did weigh in with five of the eight 100+ checkouts and pinned 20 of his 42 double attempts.

Huybrechts was far less clinical as he missed 32 of his 46 attempts but despite that he still managed to keep pushing Price all the way and was waiting hopefully on 112 in the deciding leg before the Welshman pinned double top with his last dart in hand.

👂 Listen to the thoughts of Gerwyn Price after his epic contest with Kim Huybrechts.

The Grand Slam of Darts champion initially looked like he was in for an easy night when racing through the opening set 3-0 only for Huybrechts to take the next two 3-1 and 3-2 with checkouts of 147 and 120.

That is MAGICAL from Kim Huybrechts who fires in a gargantuan 147 finish to take the second set and it's well and truly game on!#WHDarts pic.twitter.com/P9tILKEJMk

This kicked Price into a change in gear as he wrapped up sets four and five by 3-0 scorelines and clinched each one with finishes of 130 and 120 respectively while he managed another Shanghai checkout to level up the sixth at 2-2.

Huybrechts clinched the decider to stay in the game before coming from 2-0 down in the seventh and final set to force the tie-break situation - but he'd go on to miss eight darts at doubles in total over three different legs to break the Price throw and that ultimately proved costly.

Jonny Clayton laid down another marker with a crushing 4-0 victory over Gabriel Clemens in which he averaged 102.56 and dropped just four legs.

The Ferret, who has won six titles this season including the World Grand Prix and Premier League, threw seven of the nine 180s in the match and also added another three 100+ checkouts to his bulging tournament tally of eight but he did show a little sign of weakness on the doubling as he only pinned 12 of his 32 attempts.

Still, on this evidence, he'll be more than a match for Price should they meet in the quarter-finals. Before then, Clayton will face Michael Smith in a mouthwatering fourth-round clash.

Clayton pins the bull for his second 121 of the match and he leads in the fourth set!#WHDarts pic.twitter.com/xtlr6iriua

Dirk van Duijvenbode got the PDC World Darts Championship back under way after the Christmas break with a stunning comeback from three sets down to defeat Ross Smith 4-3 and book his place in the fourth round.

The 17th seeded Dutchman looked on the brink of defeat when his English opponent followed up a comfortable first set (3-1) by pinching the next two on deciding legs.

The fourth set also went the distance but after Smith failed to earn himself a dart at a double from 66, van Duijvenbode made the most of his reprieve by taking out 57 and finally getting himself on the board.

Aubergenius was now beginning to find his trademark scoring prowess and raced through the next two sets for the loss of just one leg overall as Smith's average plummeted into the 80s.

Van Duijvenbode, who averaged 91.71 and hit 10 of the 12 maximums in the match, maintained the momentum in the fifth and final set, which he also clinched 3-1 after Smith spurned two darts at tops in the fourth leg.

From 3-0 down, the Dutchman turned that game around and snatches a deciding set success over Ross Smith!

Michael Smith underlined his title credentials with a 4-2 victory over Willie O'Connor that could have been more resounding were it not for a missed match dart in the deciding leg of the fifth set.

Bully Boy made a slow start as the Irishman took the opening set 3-1 but after edging the next 3-2 with his last dart in hand on double five, it was pretty much one-way traffic as he won eight of the nine legs to move to the brink of victory.

However, the gritty O'Connor came from 2-0 down in the fifth set to stay alive and even took the sixth to a decider before Smith held his nerve on double five to complete the job.

WHAT A FINISH THAT IS!

Raymond Smith continued his dream debut with a surprisingly one-sided 4-1 victory over Florian Hempel, who knocked Dimitri Van den Bergh out in the previous round.

The Australian averaged in the mid 90s for the third successive match, hit four of the seven maximums, fired in the the highest checkout of 102 and was also more clinical on his doubles, hitting 14 of his 36 as Hempel missed 17 of his 26.

Two of the sets Smith won came in deciding legs, including the last when the German agonisingly missed tops for a match-saving 100 finish.

WHAT A MOMENT FOR RAYMOND SMITH! 🤩

'The Guru' breezes through to the fourth round, clinching the biggest win of his career with a 4-1 victory over Florian Hempel!#WHDarts pic.twitter.com/BIsRm3qqOX

CLICK HERE FOR THE FULL DAILY TOURNAMENT SCHEDULE AND RESULTS