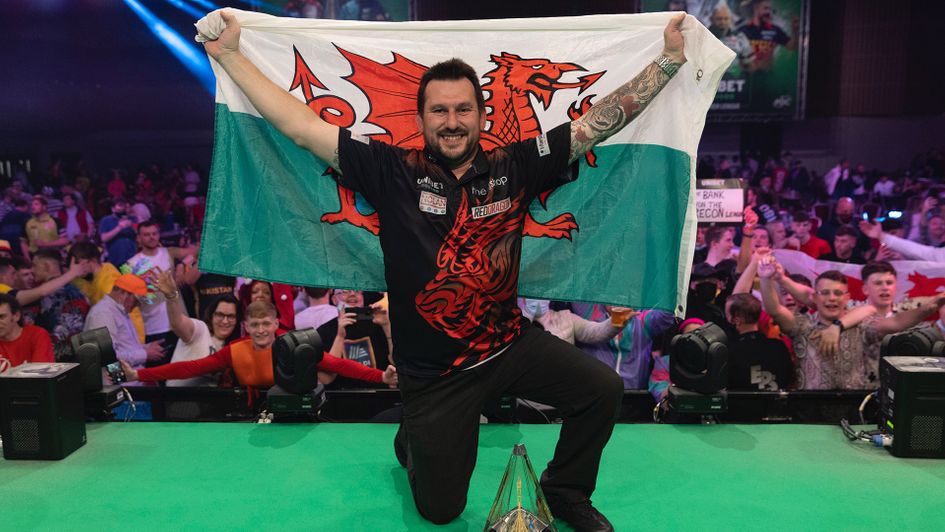 Not only is he the first Welsh champion of the event in its 17-year history but he's also the first player to lift the prestigious trophy after finishing in fourth position in the standings.

His career-changing winners' cheque of £250,000 also means he's pocketed a massive £310,000 of unranked prize money in 2021 having previously won his maiden individual TV title at the Masters back in January - an event he only qualified for because it was expanded to 24 players for the first time.

By triumphing in Milton Keynes on that weekend - coincidentally beating both MVG and de Sousa along the way - he earned his first ever call-up to the Premier League and now he's capped his dream debut with the biggest victory of his career.

Clayton, who has gone from strength to strength since lifting the World Cup with Gerwyn Price last year, has now won four titles overall this season - three more than anyone else - so to say his world ranking of 17 is a false position is some understatement right now.

🏆 Wins the Masters to qualify for the Premier League

🤑 What a season for Jonny Clayton, who is now £250,000 richer!pic.twitter.com/kgquU4gPZF

The 46-year-old only just scraped into the Play-Offs courtesy of his victory over fifth-placed Dimitri Van den Bergh 24 hours earlier but having finished just five points behind MVG and two behind de Sousa, there was no doubt he'd be a major threat on Finals Night.

And so it proved, first defeating the five-time champion 10-8 with an average of 103.25 and a stunning checkout percentage of 62.5% before taming the entertaining 'Special One' 11-5 thanks largely to another clinical display on the outer ring.

Clayton pins the bull for a 121 finish and he levels up the final at one leg apiece... pic.twitter.com/FJPlcb3H6A

The former rugby player always looked in control of the contest when a pair of 13-darters put him 5-2 and 6-3 ahead, and although de Sousa would show glimpses of his magic - such as a 100 checkout to complete an 11 darter in leg 10 - he never really looked fazed by the pressure.

It could have been closer had last year's Grand Slam of Darts champion not spurned four darts at a double when trailing 6-4 but despite responding with a fine 12-darter in the next, he only managed to get one more dart to win a leg and that came in the 16th when missing the bullseye before Clayton's crowning moment.

“I’ve put Wales on the map again and it’s just so incredible to be here and win this event,” said an emotional Clayton. “We’re so lucky to have been playing over what has been such a difficult time for everyone.

“Jose is such a great player and I just tried to keep my cool and get over the line, I’m just so happy.”

The 47-year-old from Portugal star can still hold his head high after an incredible debut campaign of his own which featured a nine-darter, a record-breaking haul of 96 maximums, 'that' tops-tops-tops checkout last night and a runners-up cheque of £120,000.

“I proved again that I am ‘The Special One’,” said a humble De Sousa. “This crowd is so amazing and I just want to say thank you to everyone who supported us.

“It was a tough final and well done to Jonny for becoming the Champion.”

A dream come true for 'The Ferret' 👏 pic.twitter.com/vlpO3bXF8a

Jonny Clayton must be the richest world number 17 ever. The Premier League champion has now won £310,000 of unranked prize money from his two TV titles this year! Talk about being in a false position. pic.twitter.com/7tY0xRMxHr

Jonny Clayton reached the Premier League Darts final on debut thanks to a pulsating 10-8 victory over favourite Michael van Gerwen at a sell-out Marshall Arena in Milton Keynes.

The Ferret produced a mesmerising display of finishing throughout an epic showdown, pinning nine of his 15 attempts at doubles before completing the job in style with a stunning 121 checkout.

Welsh World Cup winner Clayton, who beat MVG en route to winning his maiden individual televised tournament at the Masters back in January, will now face Nathan Aspinall or fellow debutant Jose de Sousa later tonight for the prestigious trophy and a life-changing cheque of £250,000.

Jonny Clayton is into the 2021 Unibet Premier League Final in his debut campaign after closing out a sensational semi-final in style, with a 10-8 win over Michael van Gerwen! pic.twitter.com/YB2YKnknLw

It was MVG's first ever defeat in the semi-finals of this tournament having reached this stage on eight occasions as the regular season table-topper but his quest for a sixth title is now over despite an impressive showing of his own.

Clayton averaged 103.25 compared to the Dutchman's 101.97 while both men threw three 180s apiece and a pair of 100+ checkouts each, including a crowd-pleasing 140 finish from MVG featuring two double tops.

Van Gerwen wasn't wasteful on the outer ring either and only missed six darts at double but his scoring suddenly deserted him after moving 8-7 up and never had another attempt at a checkout.

Michael van Gerwen goes T20-D20-D20 for a MASSIVE 140 finish and he breaks straight back for a level game!

Jose de Sousa emulated Jonny Clayton and reached the Premier League Darts final on debut debut after holding his nerve to see off Nathan Aspinall in a deciding leg.

The Special One, who produced 'that' 120 checkout during an 8-3 win over the Asp last night and also broke the record for most 180s in a regular season campaign, entertained the crowd once again with eight maximums and a pair of 100+ checkouts but his trademark comical miscounting almost cost him dear.

Jose de Sousa is just one leg away from reaching the Premier League final after firing in a stunning 121 checkout on D18! pic.twitter.com/zEA8j31iAM

Twice he gifted Aspinall legs to level up a cracking clash 2-2 and 4-4 when aiming at the wrong segments and had last year's runner-up managed to play fractionally closer to his best than he did, it could have been a different story.

However, there was nothing wrong with De Sousa's counting in the 19th leg as he produced a stunning visit of 171 from 195 to leave 24, which he took out in two darts with Aspinall waiting on 53 to pinch it.

It's the second year in a row that two debutants will contest the final after Glen Durrant overcame Aspinall back in October 2020, with De Sousa bidding for his second major title having won the Grand Slam of Darts in November.

Clayton has won six of their previous eight encounters, including a 7-3 victory on night three, but De Sousa did win their most recent clash earlier this week via an 8-5 scoreline.

Jose de Sousa accidentally scores 125 on 132, he then makes a mess of seven remaining and Aspinall swoops in to level up once more! pic.twitter.com/4vFD4sCelG

Two miscounts in the same leg from 'The Special One'....

Most 100+ checkouts (Highest in brackets)