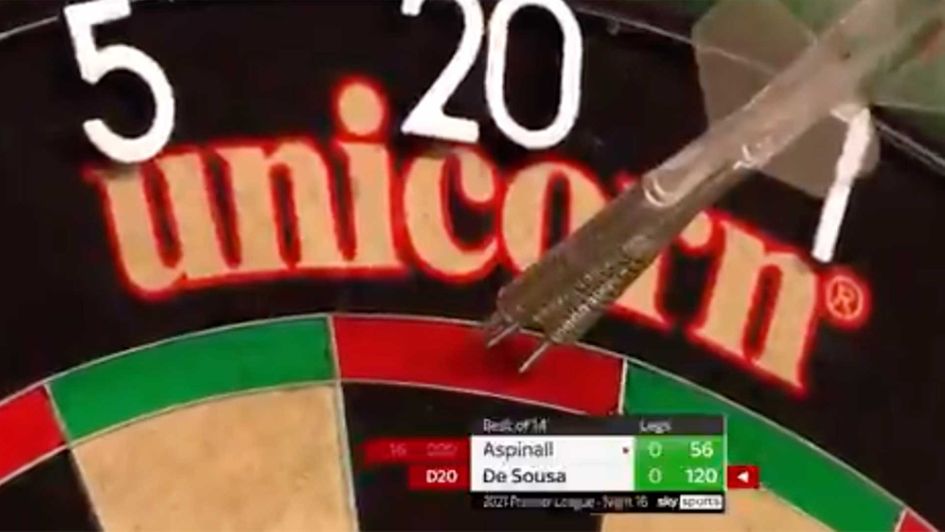 Scroll down to watch this moment of magic darts

Jose de Sousa underlined his status as the Special One of darts with a sensational 120 checkout made up of three double tops during the final night of the Premier League regular season.

The magic moment at a sell-out Marshall Arena in Milton Keynes rivalled any nine-dart finish for crowd reaction and is exactly the kind of entertainment the sport's fans deserved for the atmosphere they've created for the players during the final week of the campaign.

It came in the opening leg of his clash with fellow Play-Off qualifier Nathan Aspinall, who couldn't hold back a smile of his own when De Sousa landed his third double top that sent the fans wild.

You've got to love Jose de Sousa. This TOPS-TOPS-TOPS 120 checkout is up there with a nine-darter for crowd scenes!pic.twitter.com/efBpaWQJVJ

If that wasn't enough, Aspinall responded with a 152 checkout in the very next leg although De Sousa continued to turn on the style and went on to fire in another tops-tops finish to move 6-3 up in a crazy match that also saw him break the record for most 180s in a single season.

How can you not love this sport?!

Another tops, tops finish from The Special One 🇵🇹

De Sousa needed two maximums to overtake the astonishing tally of 79 that Gary Anderson set in his debut season back in 2011 and he managed it by throwing three of the five 180s in a clash he went on to win 8-3 with an average of 102.34.

Jose De Sousa has set a new record for the number of 180s in a Premier League season! 🔥

De Sousa completed the victory with another show-stopping 149 finish that lifted him up to second in the table and ended Aspinall's chances of pipping Michael van Gerwen to the league leader's bonus of £25,000.

"It was a great feeling to play so well in front of this amazing crowd," said De Sousa. "Three double tops was for the fans, but I wanted to show it can be done.

"I don't play to break records, but it is nice to hit so many 180s. It has been a fantastic first season in the Premier League for me. I am very happy with the way things are going right now."

Has anyone managed to catch their breath yet?! 🤯

Jose de Sousa averages over 103 as he cleans up an 8-3 win over Nathan Aspinall with a fantastic 149 finish! 🔥

The pair will now meet again in the semi-finals on Friday night while MVG will face Jonny Clayton, who held on to the last available play-off spot by defeating fellow debutant Dimitri Van den Bergh 8-6 in their crunch showdown.

Van Gerwen has now topped the table for eight of his nine seasons and will be favourite to win the overall title for the sixth time in his career on Friday night but on this evidence, De Sousa could be his biggest threat.

MVG rounded off his regular season campaign with a breathtaking display of 100+ finishing during an 8-6 victory over Peter Wright.

The former world number one took out 145, 126 and 113, with the latter coming in the second leg straight after Snakebite had managed a 109 of his own to take an early lead.

However the result could have been much different had Wright not blown four darts at a double for a 6-5 lead - two of which at tops after he'd already hit the same target with his first dart when trying to finish off 80.

This sell-out crowd has been treated to an absolute exhibition of darts tonight as Van Gerwen fires in a huge 145 finish and he can't help but smile! pic.twitter.com/e76o21WWWM

"To top the table is really important for me, but the tournament isn't finished yet," said Van Gerwen. "I want to win that title tomorrow.

"I can't really complain with 23 points, considering where I came from last year.

"It's always nice to beat Peter, he is a class player and I enjoyed playing in front of the phenomenal crowd tonight."

Clayton averaged 103.83 in his victory over Van den Bergh thanks largely to his phenomenal tally of 17 140s and his clinical checkout percentage of almost 54% - although he didn't manage to hit any of the maximums in the match.

The Welshman only needed a point to end the Belgian's chances and he did that by moving 7-5 up before wrapping up the victory two legs later.

Jonny Clayton sets up a semi-final clash with Michael van Gerwen after producing a sensational 104 average in an 8-6 win over Dimitri Van den Bergh!

What a season for the debutants 👏 pic.twitter.com/Ucbb63D13S

"Tonight was an absolutely massive game, probably the biggest I've ever played in my life," said Clayton, who picks up £80,000 for reaching the top four, the biggest payday of his career to date.

"To reach the Play-Offs in my first year in the Premier League, I'm delighted to have got over the line.

"Hopefully I can do this year after year, but I've got nothing to lose now. I'm here to win like everybody else, I just need to two more wins.

"The crowd were superb, their support means so much to me."

The opening match of the night saw James Wade and Gary Anderson playing for nothing but pride and place prize money and it was the Machine who ended up prevailing 8-6.

He averaged 99.51 compared to Anderson's 100.52 but hit four more 180s with seven in a high-quality affair despite the lack of stakes while he also fired in checkouts of 102 and a match-winning 94.