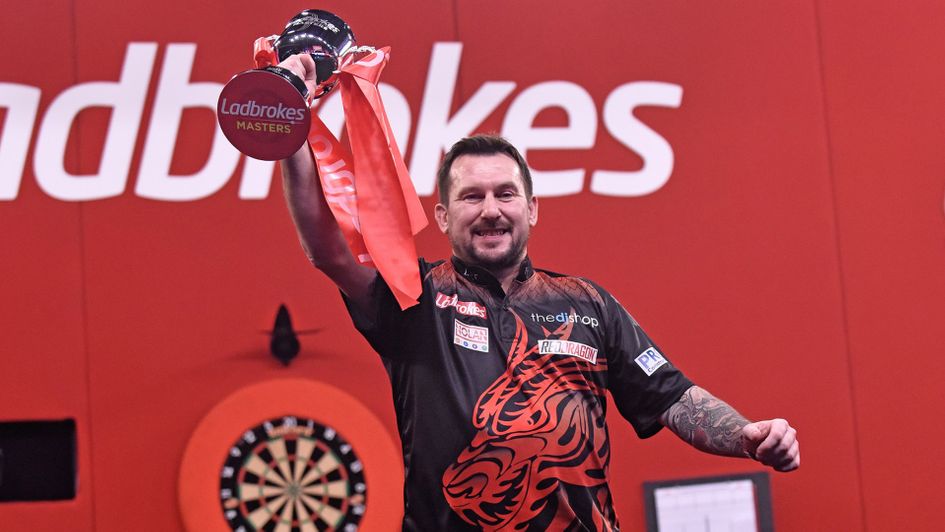 The 46-year-old Welshman started out as a 150/1 outsider but came through four successive last-leg deciders across the weekend - including victories over Michael van Gerwen on Saturday and Peter Wright in this evening's semi-finals - before overcoming a jaded King 11-8 in a relatively one-sided affair.

Clayton had also broken the record for the highest checkout percentage (90.91%) for a best-of-20 leg match during a thrilling 10-9 quarter-final triumph over James Wade earlier in the day having remarkably pinned 10 of his 11 attempts at a finish, while he also posted a tournament average of 102.66 to make a mockery of his pre-tournament odds.

Neither the Ferret nor King, who was also chasing his maiden PDC major in his seventh final spanning 15 seasons after stunning Gerwyn Price 11-10 in the last four, were made aware that the winner would be handed the 10th and final spot in the Premier League as the organisers didn't want to add any extra pressure to what was already a huge night in both of their respective careers.

While King agonisingly misses out on a return to the line-up for the first time since 2010, Clayton can now look forward to his first appearance in the money-spinning event, even though the start date is still unknown due to the ongoing impact of the pandemic.

Despite what the bookies made of his chances, Clayton's success shouldn't come as such a huge shock considering the great strides he made throughout 2020, such as winning the World Cup of Darts for Wales alongside Gerwyn Price and also reaching the semi-finals of both the UK Open and European Championship.

Nevertheless, this is the first time he's produced such a consistently high standard of darts against a string of world class opponents in one tournament and on this evidence he'll be confident of climbing towards the world's top 10 from his current position of 18th once the ranking tournaments can get under way this season.

The plasterer, who admits he'll have to reconsider his work-darts balance as a result of this latest high point, averaged over 104 in all three of his matches on Sunday and showed few signs of nerves with when the breakthrough title was on the line.

While his finishing against King wasn't quite as hot as it was against Wade, he still managed a highly impressive checkout percentage of 64.71% and also enjoyed a match high 136 in the 10th leg to level the scores at 5-5 from 5-3 down.

What a finish, what a final!

Clayton levels the match at 5-5 with a huge 136 checkout and the Welshman is averaging over 105 here! pic.twitter.com/7m3ujLmWbI

From that moment the Welshman forged clear by taking a further four on the bounce to lead 9-5 only for the battling 54-year-old to claw a couple back and keep himself in the contest.

A classy 11-darter moved Clayton to the brink of glory before finishing the job two legs later on double eight.

Clayton, who pockets £60,000 for winning this non-ranking event, told www.pdc.tv: "To get over that winning line in my first individual final is an amazing feeling. It wasn't the best of matches, we've both played better in this tournament but that was to be expected given what was at stake.

"I was so glad I didn't have to play another deciding leg. At one stage I thought Mervyn was going to take me all the way.

"He went to sleep for a couple of legs and I took advantage to go in front, from there I played pretty consistent."

Clayton can't wait to get started in the Premier League having previously tasted the atmosphere as a Challenger in Cardiff back in February 2020. He said: "I was hoping for a place in the Premier League, but to hear it confirmed on stage after I won was amazing. I'm over the moon to be in it. I really am chuffed to bits."

As for King, his name will remain in the 'best player never to have won a PDC major' debate after falling at the final hurdle for the second time in the space of three months.

The former BDO World Master, who has finished runner-up in his six previous finals since crossing over to the PDC back in 2007, also reached the climax of the Players Championship Finals at the end of November, only to lose an agonising last-leg decider to Michael van Gerwen.

He’d suffered similar heartache in his previous five, including the 2014 Masters, 2009 Premier League and 2012 World Grand Prix, so it was understandable that he got off to a nervy start in this final compared to his other performances to get this far, which included three successive averages of 101 before knocking out Price 11-10 with a mark of 97.

King averaged a below-par 94.95 despite finishing 61.54% of his doubles and hitting two 100+ checkouts and afterwards said: "I can't explain what happened because I haven't got a clue.

"One minute I felt right and the next I didn't. It was very on and off. I started to fall asleep in the semis against Gerwyn and got away with it. I was just hoping hit maybe I could force a last leg but all credit to Jonny he played some cracking darts, fair play to him.

Jonny Clayton broke the record for the highest checkout percentage in a best-of-20 leg match with an astonishing display of finishing against James Wade.

The Ferret remarkably hit 10 of his 11 attempts (90.91%) at doubles or the bullseye throughout an absorbing contest but he still had to come from 7-3 and 9-6 behind to run out a dramatic 10-9 winner over the Machine, who didn't even miss a match dart.

🤯 Jonny Clayton's checkout percentage was 91% after hitting this bullseye for a 126 finish in a deciding leg with James Wade!

Incredible finish from Clayton there, firing in huge 160 checkout to level the match at 1-1! pic.twitter.com/zIRxPMKjHR

Clayton's turn for three on the spin as he goes 18-D18-D20 for a brilliant 94 finish and he's back within one of Wade! pic.twitter.com/2n7jm9q8py

Mervyn King was the first player through to the semi-finals as he thrashed Nathan Aspinall 10-3 with a third successive average of 101 this weekend.

Having despatched Glen Durrant 6-1 on Friday and Rob Cross 10-5 on Saturday, the 54-year-old also made light work of Aspinall and even threatened a whitewash when leading 9-0. Despite his opponent adding a little respectability to the scoreline, King fired in five 180s and hit 10 of his 21 attempts at the outer ring.

World champion Gerwyn Price kept alive his hopes of following up his Ally Pally heroics with his first Masters with an impressive 10-6 triumph over Adrian Lewis, in which he averaged 105.6 and threw eight 180s,

Jackpot didn't really get going with an average of 92.3 but he will take encouragement from his weekend's performance as he bids to relaunch his career.

Defending champion Peter Wright is also through as he averaged almost 105 in a one-sided 10-5 triumph over Dave Chisnall, who now looks unlikely to get the last Premier League spot.

Chizzy is one of the players who needed to get to the final to bolster his claims but never recovered after a slow start which saw him fall 5-0 and 7-3 down. Neither player were particularly hot on their finishing but Wright scored much bettewr with eight 180s compared to for from Chizzy, who averaged 97.51.