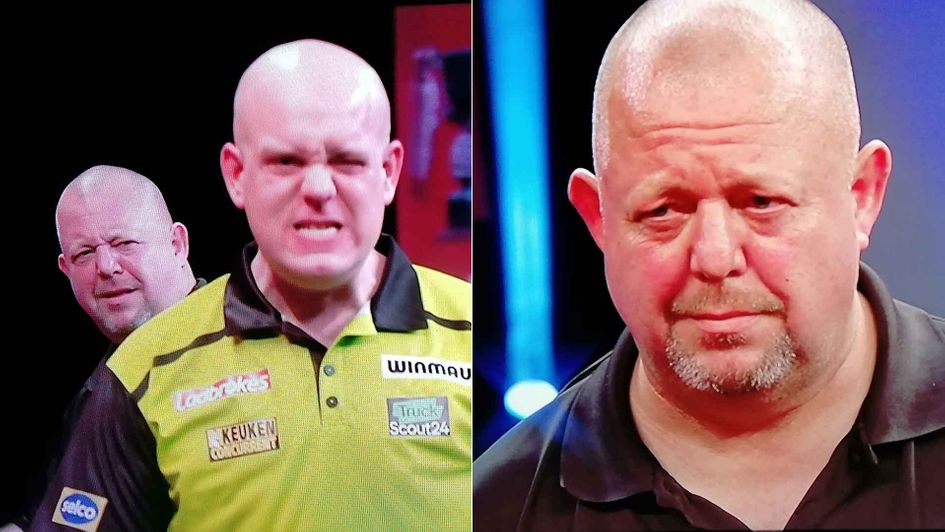 Michael van Gerwen won the Ladbrokes Players Championship Finals for the sixth time after overcoming an unimpressed Mervyn King at the Ricoh Arena in Coventry.

The world number one's pumped up celebrations throughout the match visibly annoyed King on numerous occasions but that didn't stop his veteran opponent from taking an absorbing clash to the wire as he chased a long-awaited major title at the age of 54.

Van Gerwen averaged 105 compared to King's impressive 99.78 and landed four of the seven 100+ checkouts, including a fantastic 160, while the pair also threw four 180s apiece and were never more than two legs apart.

The Dutchman, who beat Gerwyn Price 11-8 in the semi-finals earlier in the night, had the darts in a deciding leg and although back-to-back visits of 134 and 140 left him with 48, he missed two darts at double 16 as King piled on the pressure with a score of 137 to leave 45.

Van Gerwen returned to the board to pin double eight for just his second major of a difficult 2020 by his own sky high standards and he can now head to the Alexandra Palace next month in trophy-winning form once again.

MVG, who won the UK Open Finals way back in March as well as three other non televised titles this season, couldn't hold back the emotion as he celebrated the 41st major PDC crown of his career and his 138th overall, much to King's clear irritation.

🏆 Michael van Gerwen holds his nerve in a deciding leg to beat Mervyn King to win the Players Championship Finals!

😩 You've got to feel for King, who was chasing his maiden major PDC title in his first final since 2014! pic.twitter.com/VuUcKpwz3p

King, who was playing in his sixth PDC major title six years after his last, had earlier thumped a below-par Peter Wright 11-4 and raised his game even further despite a barrage of heavy scoring and 100+ finishing from van Gerwen.

He weighed in with checkouts of 115 and 107 to move into an early 3-1 lead and refused to buckle even when MVG produced efforts from 146 and 94 to complete back-to-back 12-darters to level the scores before moving 6-4 ahead with a breathtaking 160 finish.

Now that, is world class. Van Gerwen has come alive in this final and he heads into the break with a 6-4 lead after a massive 160 finish! pic.twitter.com/Yd0taXsrZf

More sizzling finishing from 120 and 135 followed as the 31-year-old looked as though he was going to sprint to the finishing line at 9-7 up.

It's another fabulous finish in this match and Van Gerwen is within two of the title! pic.twitter.com/zjoFaQ5n1q

However, King unleashed a stunning 126 finish on the bullseye for a 12-dart break - which even he thought about celebrating - after MVG had missed three darts to finish 36 and the next three legs went with throw before the decider was required.

He thought about roaring, but decided against it! Classic Merv...

He enjoyed that finish there, pinning the bull for a 126 and he's back within one! pic.twitter.com/DFqEpsI61O

But with the advantage of throw, van Gerwen just about kept his cool under immense pressure to deny King the chance of breaking his major duck and become only the second player in history behind Phil Taylor to win a televised event more than five times.

"I'm proud of myself," admitted an emotional van Gerwen, who averaged 102 for the the tournament and pockets £100,000. "I've worked hard for this, and to come back stronger and stronger like this means a lot to me.

"Of course, it's been a long time since I won a tournament so I'm glad I played a very nice tournament. I played well and I'm glad to have my hands back on the trophy. I've been out of form for a few months and you need to battle back. You have to fight back and I'm glad I did.

"I had to play my best performance I could, because Mervyn was playing a phenomenal game. I couldn't get rid of him and he kept pushing me to the end.

"I needed a couple of really good finishes but I was thinking 'don't let this slip out of your hands'. That was the only thing that I was worrying about."

King also lost his last final in agonising circumstances when he blew a 9-2 lead and missed eight match darts against James Wade at the 2014 Masters but at least on this occasion he can have no regrets over his own performance.

The Suffolk thrower, who has also lost the final of this event in 2010 against Paul Nicholson as well as the finals of the 2012 World Grand Prix, 2009 Premier League and 2008 Championship League, hit 10 of his 16 attempts at doubles as he reminded everyone why he will be a dangerous outsider at the World Championship.

He pockets £40,000 for his efforts this weekend which lifts him back into the world's top 20 at 19th position.

Mervyn King reached his first major televised final for over six years as he put a strangely poor Peter Wright to the sword with a shock 11-4 victory at the Players Championship Finals in Coventry.

The 54-year-old was playing in his first semi-final since reaching four of them in the same year he finished an agonising runner-up to James Wade in the 2014 Masters, where he blew a lead of 9-2 and missed eight match darts.

King, who has also lost the final of this event in 2010 against Paul Nicholson as well as the climaxes of the 2012 World Grand Prix, 2009 Premier League and 2008 Championship League, is chasing his first PDC major title and will be full of confidence after sweeping aside the world champion.

The Bradwell ace stormed into an unexpected 8-2 lead and although Wright threatened a comeback by taking back-to-back legs, King refused to buckle and won the next three to seal an emphatic triumph.

He averaged 92 compared to Wright's 84 despite throwing one fewer 180 with three while his finishing was far more clinical with 38% to Snakebite's 21%.

👑 Mervyn King is through to his sixth televised PDC final - but first since 2014 - after thrashing world champion Peter Wright!

🏆 Can the 54-year-old finally win his first PDC major tonight?pic.twitter.com/XKm0L0Aa1A

King will now face Michael van Gerwen, who is hot favourite after overcoming his arch rival Gerwyn Price 11-8 in the second semi-final.

The defending champion beat the Iceman to win this title for the fifth time last year but was marginal underdog this time around having won 'just' four titles compared to Price's eight this season.

Neither player reached their peak performance in a clash that failed to explode into life like many of their previous 25 encounters - of which MVG had won 21 - but that won't bother the Dutchman as he chases a much needed return to trophy-lifting form ahead of the World Championship.

Van Gerwen averaged 98 compared to Price's 95 despite throwing one fewer maximum with four but it was his finishing that was most impressive as he converted 11 of his 22 double attempts as Price spurned 19 of his 27.

The world number one also looked in trouble when the Welshman broke his throw to go 8-6 up but he responded like the van Gerwen of old to rattle off the next five legs in succession.

🏆 The world number one will now meet Mervyn King for the Players Championship Finals title.pic.twitter.com/t3mrRdWUQe

The Dutchman trailed 3-1 early on but won the next five legs on the trot to seize control and never look back as he averaged a stunning 110 and also weighed in with three 100+ checkout, including 100 and 148 to seal victory.

💪💚 This is the real Michael van Gerwen but can he keep it up and win the Players Championship Finals title tonight?!

🙌 The Dutchman averaged 110 and hit three 100+ checkouts, including this 148 to beat Dirk van Duijvenbode 10-5! pic.twitter.com/mRYMxb90JE

Price, who lost to MVG in last year's final but may start as marginal favourite due to his incredible form this season, came through a thriller with Joe Cullen that went to a deciding leg.

The Rockstar stormed into a 4-1 lead only for the Iceman to level matters before the pair, who both averaged 96 and threw seven 180s apiece, traded blows and legs for the rest of the contest until it reached 9-9.

Cullen had the advantage of throw but Price produced a 14-darter with his opponent waiting on 50.

Mervyn King reached his first televised semi-final since contesting four of them back in 2014 as he battled back from 7-2 down to defeat Damon Heta 10-8.

Playing in his second successive major quarter-final having reached the same stage of the Grand Slam of Darts, the Australian was firmly in charge but was reeled in by the 54-year-old, who is chasing his maiden major title.

King averaged 101 compared to Heta's 97 while they both threw five 180s each in an entertaining clash.

King will play Peter Wright, who won six legs on the trot to defeat a shellshocked Michael Smith 10-6.

The world champion trailed 6-4 after his 4-1 lead was wiped out emphatically by Smith thanks to finishes of 94, 105 and 114, but the St Helens star missed double 12 for a nine-darter against the throw in leg 13 and was harshly punished by Wright's 12-darter.

Michael Smith WIRES D12 for a magical nine-darter and he LOSES the leg!

One of the best legs you'll see and Michael Smith will be absolutely gutted to be trailing 7-6 now... pic.twitter.com/lOQBDN6CqD

Here is a full list of winners from the 23 Players Championship tournaments this season.