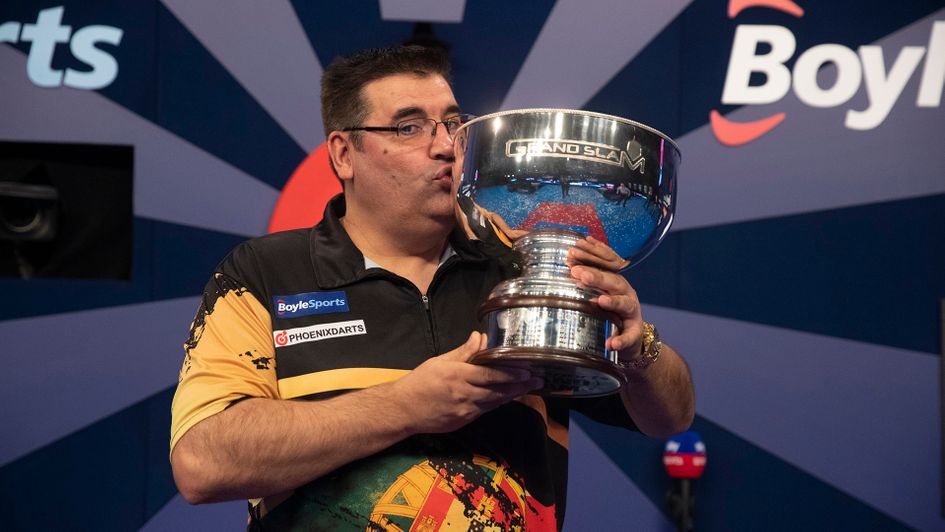 Jose De Sousa’s decision to give up his job as a kitchen fitter last year in pursuit of his darting dreams has paid off in some style.

Playing in his maiden televised final, the ‘Special One’ lived up to his name by landing the Grand Slam of Darts title with a 16-12 victory over James Wade in Coventry.

It’s remarkable to think this is just his second season since earning his first PDC Tour Card and while the 46-year-old has been thrilling ardent darts fans away from the TV cameras over the past 18 months with his title-winning form, dazzling style of play and lovably unorthodox finishing, he’d never previously gone beyond the third round of any of his previous eight majors.

But now he’s proved he can stand the heat of the spotlight as well as the kitchen in one of the sport’s most prestigious events, he’ll be highly-fancied to land the biggest of the all at the Alexandra Palace.

So the latest major winner in darts is a 46-year-old rising star who was fitting kitchens since the 1990s until last year. How can you not love the wonderful stories darts throws up. Well played Jose De Sousa, the Special One.pic.twitter.com/bGZy76TYcf

Having negotiated the group stage on his tournament debut, the former carpenter and soft-tip darts star showed his undeniable class in the knockout stages to defeat Dave Chisnall, Michael Smith and Simon Whitlock to set up a final with the now three-time runner-up Wade.

After a nervy start of missing 10 of his first 12 darts at doubles to fall 3-0 down, De Sousa overpowered the Machine with a barrage of 15 180s and consistent heavy scoring while he showed few signs of nerves at the finishing line as he sealed his historic moment with a stunning 158 checkout.

De Sousa, who won his third PDC title when defeating Michael van Gerwen in a European Tour final last month, becomes just the sixth different player to get his hands on the Eric Bristow Trophy since the tournament began in 2007 and is obviously Portugal’s first ever major winner.

Victory also earns him a massive pay packet of £125,000 which lifts him to 15th on the PDC Order of Merit and a seeding for the World Championship - not to mention an almost certain spot in the lucrative Premier League line-up next year.

De Sousa, who averaged 99.95 compared to Wade's 94.26 and hit 13 more maximums, told www.pdc.tv: "This is a dream come true, I can't explain my feelings in this moment. This is the greatest day of my life. When I hit the 158 finish I knew I was going to cry straight away.

"There is so much work behind me to get to this position. I am so thankful to everyone. Five years ago I was on my sofa at home watching the guys play on TV and I wished that maybe some day I can play against these wonderful players.

"It was a big change I made to my life in turning professional but look at me now. It's amazing and I'm very proud of myself."

🏆♨️ Now that Jose De Sousa has proved he can stand the heat of the spotlight as well as the kitchen, will you be backing him for World Championship glory?

Wade's superior finishing of 48% (De Sousa 42.11%) was let down by below-par scoring and afterwards the 10-time major winner said: "In the final I was rubbish. He outplayed me by a million miles.It hurts when you don't play well and it hurts when you don't contest someone. I'm still confused as to why that happened.

"I'm finding it hard to be positive after that, it's very disappointing. Jose played a lot better than me. The better man won on the day."

The 2010 and 2014 runner-up was competing in his 25th major final and his second in a month having lost to Peter Wright at the European Championship but despite his disappointment, he has firmly reminded everyone why he could be a real threat for his first world title.

🏆 Jose De Sousa fighting back the tears of joy to lift the Grand Slam of Darts trophy, and a life-changing cheque of £125,000.

Wonder if he thought this was possible when he was fitting his final kitchen as a carpenter last year?pic.twitter.com/avxrhJAPY3

🥲🏆 "Seven years ago I was on my sofa watching these guys play on the TV and I wish maybe some day I could join them. Look at me now, it's a dream come true. Amazing."

👏 Jose De Sousa teaching us all to follow our dreams...pic.twitter.com/R1dWWKj8LK

James Wade provided a critical assessment of his performance, but he admitted he could have no complaints about the result tonight.

He should be 2-0 up, but he finds himself 2-0 down! Jose De Sousa hits six perfect darts but can't complete the leg, missing his ninth double in two legs and Wade doubles his lead...#BoyleSportsGSOD pic.twitter.com/Od16Fgv12H

That'll settle Jose there as he finally hits a double, at the 11th attempt, and he gets a break back!#BoyleSportsGSOD pic.twitter.com/0wNzWvugy8

Jose's scoring is so good, he's missed TEN darts at double in five legs but is still averaging over 102!

After Wade raced into a 3-0 lead, De Sousa pegs him back and at the break, Wade leads 3-2...#BoyleSportsGSOD pic.twitter.com/G7Vr3wGrvS

Stunning 130 checkout from Jose De Sousa there as he levels up this final at five legs apiece!#BoyleSportsGSOD pic.twitter.com/B00CQgA063

James Wade fires in an incredible 161 finish to reduce the deficit to just two! #BoyleSportsGSOD pic.twitter.com/aMVPx3XWfY

Brilliant 120 finish there from Wade as he reduces the deficit to just two legs and this is a massive leg coming up!#BoyleSportsGSOD pic.twitter.com/j9zs8Un7j7

🙌🏆 If winning your maiden major title in your first final wasn't enough, how about doing it like this!

SCROLL DOWN FOR GROUP TABLES

Scoring System: Each competitor plays each other once in a best-of-nine legs match, with two points going to the winner. The top two from each group will then progress to the knockout stages. Any two-way points tie in any position, the player with best leg difference will finish higher. If two players are still level then the winner of the match between them will progress. There is the potential for a Nine-Dart Shoot-Out should three or more players be tied for points and leg difference. For more details see the format section further down.

Grand Slam of Darts Most Titles