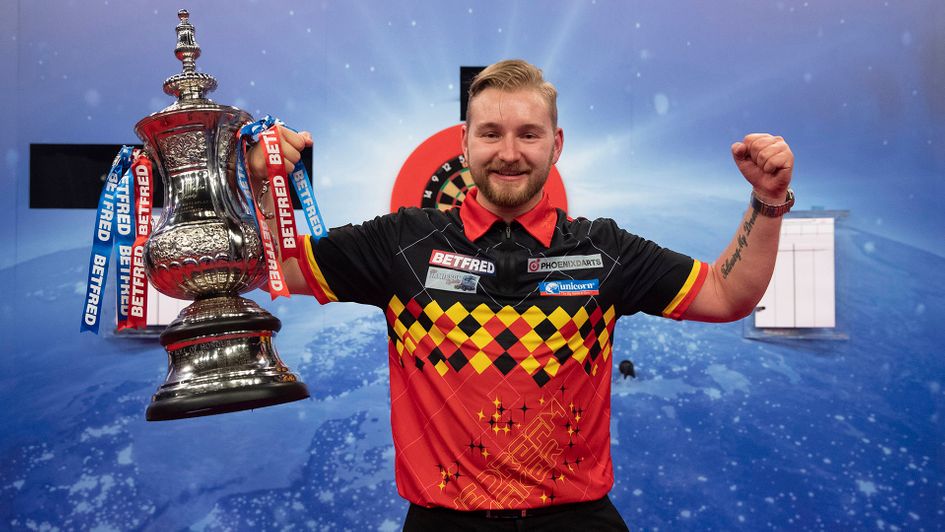 Dimitri Van den Bergh became the first debutant to win the World Matchplay since the inaugural edition of 1994 after a career-changing 18-10 victory over Gary Anderson in Milton Keynes.

In his first appearance in a PDC major final, the two-time World Youth champion is also celebrating his first senior title of any kind at the age of 26 thanks to this dominant display over one of the all-time darting greats.

Anderson struggled throughout a contest and incredibly had to wait until the 24th leg before he hit his one and only 180 of a match that bizarrely only featured four - but that can't take anything away from Van den Bergh's sparkling display that fast improved as his confidence grew, particularly on his high finishing.

The 200/1 pre-tournament outsider, who is the first player from Belgium to win a PDC major, landed a spectacular checkout of 170 along the way, while further finishes from 132 and 124 knocked the stuffing out of the lacklustre Flying Scotsman.

Dimitri Van den Bergh becomes the first player to win the World Matchplay on debut since everyone was a debutant in 1994!

He was just one month old back then. Superb achievement and many more to come! Here's that 170 checkoutpic.twitter.com/Ylu03ORATL

Following a slow start from both players, the Big Fish completed a classy 12-darter in the 12th leg and came as an immediate response to Anderson's sole ton+ finish from 130 that had put him ahead for the last time in the match at 6-5.

Van den Bergh won five of the next six legs to storm into control and his subsequent 124 checkout on the bullseye at 12-8 up was another sucker punch for the 2018 World Matchplay champion, denying him a much-needed opportunity from 54.

But the fatal blow was landed in the next. After Anderson agonisingly missed the bullseye for a 127 finish, the DreamMaker rubbed salt into the wounds by hitting the same target for a 12-darter completing 132 checkout and there was no way back from that.

The two-time world champion did manage to pull a couple of legs back but with the second of those coming when 16-9 down, he was just merely delaying the inevitable, especially the way he was playing.

Van den Bergh averaged an impressive 98.31 compared to his opponent's 92.81 while he pinned 18 of his 40 attempts at double as Anderson spurned 20 of his 30. He hit four ton+ checkouts overall, including a 121 in the ninth leg, and that took his tournament tally of those to 12 from just five games.

🙌 The two-time World Youth champion was 200/1 before the tournament began but has now won his first senior PDC title in his maiden major final.

Another of the sport's fastest rising stars in Nathan Aspinall hit the Big Fish to win his maiden major final against Rob Cross at the 2019 UK Open, of course, and used that as the springboard to reach the world's top 10 as well as earning Premier League selection - and this is certainly the path Van den Bergh appears to be on now.

The Belgian star's cheque for £150,000 means he soars up to 12th from 26th on the PDC Order of Merit, which will see him qualify for all the big majors as a seeded player and almost certainly secure one of those coveted invitations for next year's Premier League.

🏆👏 Dimitri Van den Bergh is just the 10th different player to get his hands on the Phil Taylor Trophy.pic.twitter.com/RI72gkU9hH

Van den Bergh headed to Milton Keynes as a 200/1 outsider with some bookies despite his impressive track record of reaching four major quarter-finals at this stage of his career, including two World Championships and this year's UK Open, as well as beating Michael van Gerwen and Gary Anderson in front of 20,000 fans to reach the final of a non-ranking televised World Series event in Germany two years ago.

More crucially, however, was the three months he'd spent as a lockdown lodger at Peter Wright's house while he waited for the all-clear to return home to Belgium.

While the impact wasn't noticed immediately during the PDC Home Tour and the Summer Series, the lessons he learned from the current world champion and multi-major winner clearly helped him take the next step in his blossoming career.

Indeed, the Antwerp thrower was quick to thank the Wright family during his post-match interviews shortly after lifting the Phil Taylor Trophy aloft in front of the screen of fans at the empty Marshall Arena.

🏆👏 Dimitri Van den Bergh is just the 10th different player to get his hands on the Phil Taylor Trophy.pic.twitter.com/RI72gkU9hH

Van den Bergh told www.pdc.tv: "My dreams have come true, what a beautiful trophy, I’m so happy. I have so much respect for Gary, to beat him is showing me how far I have come and now I know I can win, I can’t believe this."

"The world is going through a very difficult time and the PDC, Barry Hearn and Matthew Porter have given me a chance to live my dreams when it hasn’t been possible for other, so thank you to them."

As for Wright's hospitality, the 26-year-old said: "I spent a lot of time with Peter Wright over the lockdown and he has taught me so much, I’m so grateful to him and his family for everything they did for me during a difficult time."

"I am making my dreams come true. It is happening." 😍

Dimitri Van den Bergh can barely believe what he has achieved!

This interview is what sport is all about 👏 pic.twitter.com/KxgpO9BPnp

Van den Bergh was born just a month before Larry Butler beat Dennis Priestley to win the inaugural edition back in 1994, and last night became just fourth player to reach a final on debut, following on from Ronnie Baxter (1998), Wayne Mardle (2003) and James Wade (2006).

Anderson's run to the final did at least help him defend a chunk of ranking money he won at the Winter Gardens in 2018 but a cheque of £70,000 won't be too much consolation for a legend striving to win the ninth major PDC title in his 20th final.

Victory would have also seen him join Phil Taylor, Rod Harrington and Michael van Gerwen in an elite group of players who have won this title more than once but now he'll have to lick his wounds and eye the remaining majors this year.

The eight-time major winner, who hit his Blackpool nine-darter on this day in 2018 against Joe Cullen, hadn't really been happy with any of his performances throughout the tournament and even after beating Michael Smith in the semi-finals claimed: "I can’t throw me darts right, it’s driving me bonkers."

After this defeat, which ends his perfect behind-closed-doors major record having won the 2018 UK Open, the 49-year-old said: "He played well right from the off, I just wasn’t there tonight. All credit to Dimitri, he is a lovely lad and deserves his win tonight.

"I’ve got a few weeks off now to sort a few things out, I had a few issues with my grip and darts dropping low but no excuses, he deserves it."

"I wasn't even close to the game. I was lucky I got a few legs off him to be honest."

It wasn't to be for Gary Anderson tonight, but 'The Flying Scotsman' is full of class in defeat 👏 pic.twitter.com/doY3L5uYBM

Routes to the World Matchplay final

Seedings in brackets. Players must win by two clear legs

* Click on the underlined finals for reports. Sadly the current Sporting Life website doesn't have archived versions of the finals before that.World Matchplay Most Titles

We are committed in our support of responsible gambling. Recommended bets are advised to over-18s and we strongly encourage readers to wager only what they can afford to lose.If you are concerned about your gambling, please call the National Gambling Helpline on 0808 8020 133, or visit begambleaware.org.Further support and information can be found at GamCare and gamblingtherapy.org.