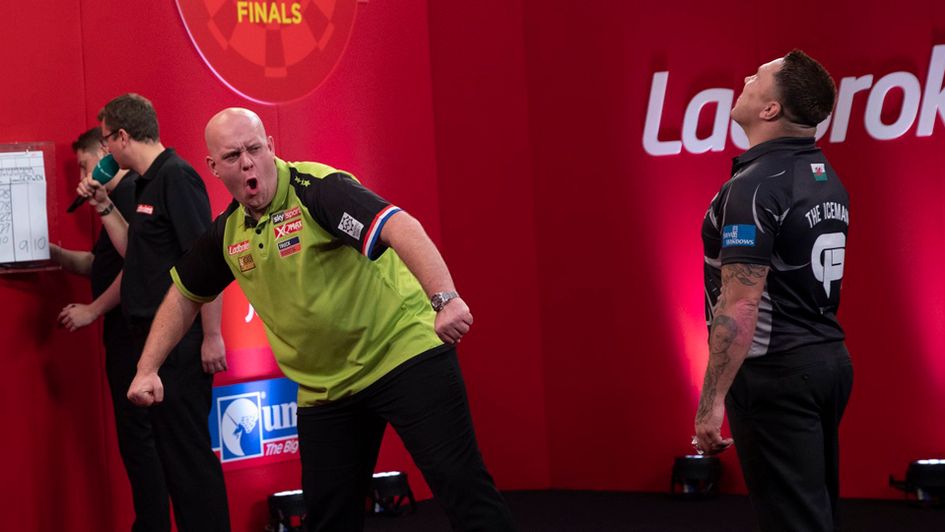 Michael van Gerwen will head into the World Championship with yet another major televised title under his belt after another gripping instalment of his rivalry with Gerwyn Price.

A week after finally losing his long unbeaten record against the Iceman in their 20th meeting - when Price went on to successfully defend his Grand Slam of Darts title - the world champion got his revenge with an enthralling 11-9 triumph that so nearly went to a deciding leg.

Saturday's nine-dart hero van Gerwen was up against it in a topsy-turvy final packed full of drama despite sub-100 averages from both players, but won three legs on the trot from 8-7 down to move to the brink of victory.

Former pantomime villain Price, who has turned jeers to cheers so much in recent months that he had the lion's share of the 5,000-strong crowd at the Butlin's Minehead Resort on his side, was not finished yet and pulled one leg back to force MVG to throw for the match.

Price's fifth 180 helped him reach a finish first but he blew four attempts at doubles before MVG eventually pinned double five with his last dart in hand to claim this title for the fifth time and a cheque for £100,000.

This is not only his 51st individual career TV title at the age of 30 but also his fourth in just over a month having also triumphed in the World Grand Prix, Champions League and World Series of Darts Finals while it's also his eighth of 2019 following his successes at the Masters, Premier League, Melbourne Masters and New Zealand Masters.

Van Gerwen, who vanquished memories of last year's agonising defeat to Daryl Gurney, told www.pdc.tv: "It feels really good. I think I deserved it and I was the better player in the final, but even though we didn't produce our A-game I think it was a great game to watch.

"I missed a few doubles that kept him in the game but I think this final had everything. I think Gerwyn is good for darts. He's exciting and he's a good player and he has done well lately. He deserves every credit and it will be a great rivalry - but today was my day."

The result also takes his seasonal title haul to 14 overall but he'll head to the Alexandra Palace next month knowing precisely who the main threat is going to be in the opposite half of the draw, which will be made this Monday.

Price was playing in his third TV final in a matter of weeks, having also finished runner-up to Rob Cross at the European Championship, and will still take a lot of confidence from the weekend despite defeat with the trophy on the line having further underlined his status as a blockbuster star with more dominant performances.

"Michael was the better player tonight," admitted Price. "I've got no complaints, and the opening leg probably set the tone for the match.

"I battled back to get in front but Michael was too strong in the end. I've had another great weekend and the crowd were fantastic, they gave me great support."

Scroll down for more match highlights, stats and reaction

The 21st meeting between the world number one and three had been widely touted before a dart was thrown this weekend but that didn't stop the excitement from building when their final places were eventual sealed earlier in the evening.

However, despite all the hype, the opening leg resembled something from a local pub league as van Gerwen eventually scrambled home on double two after the pair had missed 17 darts at doubles combined.

🙌 The final we've all been waiting for, between the best two players in the world.

🤣 And the first leg was won in 22 darts, with 17 missed attempts at doubles combined!pic.twitter.com/RIHXsPfRPP

Van Gerwen followed up this 22-darter with another in 17 but it wasn't too much longer before the standard picked up and by the time the seventh leg came round, Price got the 5,000-strong crowd on their feet with a 104 checkout to complete a 12-darter that reduced the deficit to 4-3.

A trademark roar from Price who takes out 104 to close the gap to just one! pic.twitter.com/tLIJKt5vQM

The world champion went on to take a 6-4 lead into the second interval only for Price come roaring back after the break by winning four of the next five, including an 11-darter in the fifth, although his life was made easier by MVG's double troubles.

This is a fantastic final here and they enter the break with Price leading 8-7! pic.twitter.com/AYRblSLfbE

Mighty Mike quickly bounced back into life with those three legs on the spin, following a 72 checkout with back-to-back 14-darters and although Price stopped the rot by taking the next in 13, he was unable to force a decider.

Van Gerwen averaged 97.92 compared to Price's 96.4 and both hit five 180s apiece but their scoring was hindered by their performance on the doubles.

The Dutchman squandered 28 attempts at a finish while Price, who hit the high checkout of 104, missed 20, including those costly four in the 20th leg.

Van Gerwen had earlier booked his place in a 65th individual PDC televised final with an 11-8 victory over Ian White, who playing in his first semi-final at this level at long last.

Diamond, 49, had lost all his previous nine TV quarter-finals prior to his dramatic 10-9 victory over William O'Connor during the afternoon and looked as though he could have gone a step further when a 13-darter reduced his deficit to 6-5 having been 4-1 down early on.

But despite impressive averaging 102.38, White couldn't get any close as MVG powered away before compleing the job with an 11-darter.

Van Gerwen is averaging over 103 now as he takes out 130 on the bull to extend his advantage to two once more... pic.twitter.com/15M3FqnD3P

Price, meanwhile, found himself in a real battle against Chris Dobey, who was appearing in his second major semi-final having also reached the last four in the World Grand Prix.

Hollywood opened up an early 4-1 lead only for the world number two to respond with three successive 11-darters while a fine 132 checkout ensured they went into the second interval at 5-5.

👏 Gerwyn Price trailed Chris Dobey 4-1 after the first session but three successive 11-darters and a 132 checkout levels the match at 5-5!

Should be a crowd favourite...pic.twitter.com/GZHwqCBqxN

Dobey, who had ruthlessly ended Raymond van Barneveld's hopes of ending his long wait for a televised title earlier in the day with a 10-2 quarter-final win, was still looking good to cause an upset at 8-7 up but that would be the last leg he'd win as the Iceman reeled off four on the spin to seal his spot in his fifth televised final and fourth in just over a year.

During the afternoon's quarter-final session, Price powered past Stephen Bunting 10-3 with a tournament high average of 108.75 that owed a lot to his ruthless efficiency on the doubles, pinning 10 of his 16 attempts.

His opponent has been playing some of his best darts in recent times to reach the last eight, averaging 107.03 in a 10-2 victory over Ryan Meikle on Saturday, and even against Price he posted a three-figure mark for the third game running.

PRICE IS ON FIRE 🔥

Gerwyn Price achieves the highest average of the weekend so far, averaging 108.75 in a 10-3 demolition job on Stephen Bunting!

Van Gerwen was far less convincing in a poor quarter-final with Mervyn King, averaging just 92.15 compared to his opponent's 89.68, but he ground out a 10-6 victory that he put to the back of his mind as soon as it had finished.

King with a big 121 checkout to move within three of Van Gerwen, but the Dutchman is now throwing for the match... pic.twitter.com/oH5dD6hFkf

The countdown to the World Darts Championship, which starts on Friday December 13, can now begin in earnest and there'll no doubt be plenty of punters salivating at the prospect of another van Gerwen v Price collision.

"Everyone played well against me this weekend and I had to do everything in my possibilities to win these games," added Van Gerwen. "I'm very happy that I did that and I think I did well this weekend.

"I will look now towards the World Championship and it will be my goal to keep hold of that title too, but that's a couple of weeks away so I will enjoy this win first."