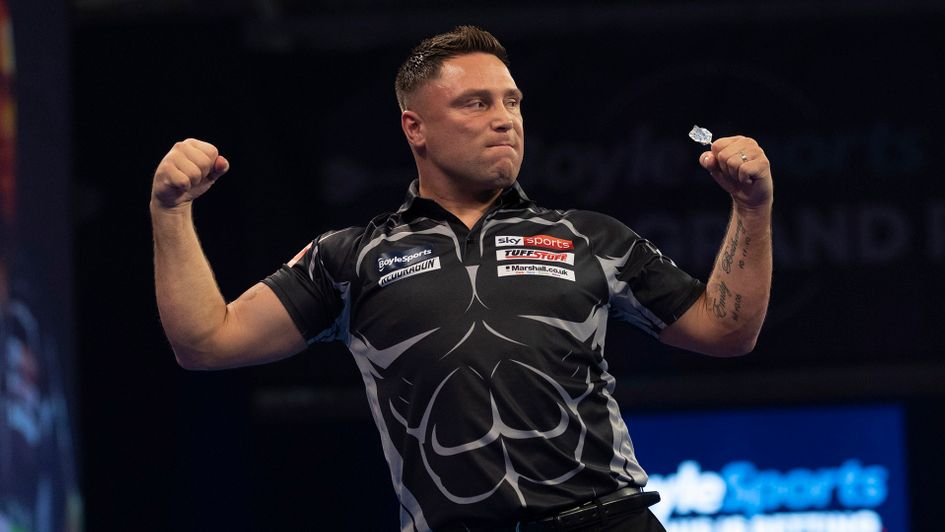 Gerwyn Price overcame a two-set deficit, a worrying arm injury and the crowd to defeat Stephen Bunting 4-2 and set up an all-Welsh World Grand Prix final with Jonny Clayton.

The defending champion looked out of sorts and heading for a heavy defeat as Bunting raced through the opening set 3-1 before doubling his advantage in the second after his troubled opponent had spurned a dart at tops in a deciding leg.

A despondent Price then took his time returning to stage after the interval due to a problem with his elbow and it wasn't until he pinched the third set with stunning 74 checkout under pressure at 2-2 - when Bunting waited to come back on tops - that his usual fire started to return.

Much, MUCH better there as Gerwyn Price averaged 97 in that third set, halving the deficit with some clutch finishing! pic.twitter.com/IFeIHUdUtx

The world champion then took out 60, 78 and 79 to win the fourth set 3-1 while he then hit the the front for the first time when a pair of 12-darts helped him edge the fifth 3-2 and silence the boos.

That proved to be a sucker punch for Bunting, who then punished for missed darts at doubles in the opening leg of the sixth before Price completed victory with 13 and 14 darters.

We have an all-Welsh final! 🤝

Gerwyn Price comes from two sets down to defeat Stephen Bunting 4-2 to secure his spot in the final as he looks to retain his World Grand Prix title! pic.twitter.com/F7gNVRUszo

Price, who averaged just 88.99 compared to the Bullet's 88.19 despite firing in seven of the 13 180s in the match and converting 53.6% of his finishing doubles and 40% of his staring doubles, said: It's probably one of the worst performances that I've had, that was tough.

"I was under a lot of pressure and the crowd were on my back. It was tough at moments up there. I thought I was probably going to lose that game, I wasn't playing well, the crowd were against me, Stephen was playing brilliant early on.

"I just dug in there and found some decent darts, but nowhere near what I can play. I'm happy that I won."

On his arm injury, Price said: "I had a little bit of trouble with my arm but it was fine after that. I was just looking at myself, I just needed an extra bit of time.

"At 2-0 down, I probably should have been one-all and I was basically down and out. I had to give myself a kick up the backside.

"I was just plodding along, trying to scrape legs and I wasn't playing particularly well, but I just dug in there until the end and thankfully got over the winning line."

Earlier Clayton remained on course for his first televised ranking title as he brushed aside Danny Noppert 4-1.

The brilliant Welshman, who won the lucrative Premier League and Masters crowns earlier this year, is now through to his first major ranking final since the 2017 Players Championship Finals as he bids to catapult himself firmly and deservedly into the world's top 10.

Noppert had enjoyed one of the finest weeks in his career by reaching the last four thanks to victories over Michael van Gerwen, Vincent van der Voort and Ian White but he saved his worst performance of the tournament when Clayton produced yet another stellar one.

The Ferret headed into the clash with outrageous stats of 65% for his starting doubles and 51% for his finishing doubles and although he couldn't quite maintain those levels, he was crucially more accurate than the Dutchman.

Clayton, who hit three of the six 180s in the match, managed a checkout percentage of 40.6% compared to Noppet's below par 26.9% while he also fired in a pair of 100+ finishes, including the highest of the match from 112.

He came from a leg down to win the first set 3-1 with a 108 checkout only for Noppert to restore parity in the next by the same scoreline.

The 2020 World Cup winner then won the third set 3-1 despite Noppert's fine 107 finish, came from two legs down to win the fourth before racing through the next 3-0 to seal his place in Saturday night's final.

Six legs on the spin for Jonny Clayton as he seals his spot in the final of the 2021 World Grand Prix, seeing out a dominant 4-1 victory with a 95 average!

'The Ferret' certainly knows where the camera is! 📸 pic.twitter.com/PK9NA4o3Tg

"It's just an awesome feeling, I'm over the moon," said Clayton. "I came here tonight to reach the final and I've done it - it's absolutely fantastic for me.

"Danny is a fantastic player and a great guy. He was 2-0 up in the fourth set, I came back and nicked that one and I think that's what made the difference.

Price is the 4/7 favourite to retain the title on Saturday night, with Clayton the 11/8 outsider going into the sell-out final in Leicester.

"Jonny's played fantastic all tournament and played brilliant today," said Price. "It's going to be a tough game tomorrow but hopefully I can play a lot better than I did today, because I need to."