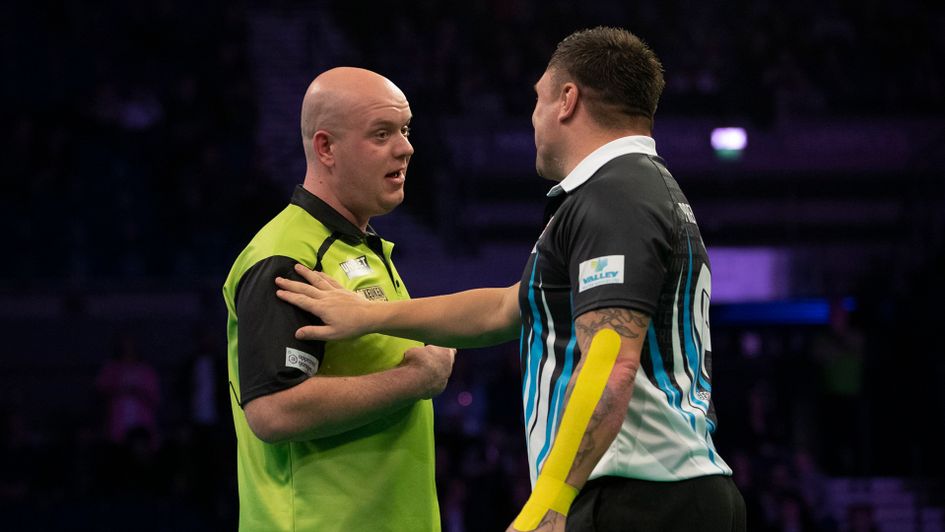 Paul Nicholson gives insight into the mental strength and game plans needed to thrive in double-start darts and gives his predictions for the World Grand Prix.

There are some players who can’t wait for the World Grand Prix because double-start is in their wheelhouse – whether that’s because of where they grew up or had it forced upon them when they played local darts.

I loved this event and actually wanted more double-start tournaments during the season as I grew up in the North-East where this format is played a lot locally.

However for much of the UK and abroad, double-start is very unnatural for players because they just don’t play it, so when this comes around, many of them get found out.

You simply have to try and evolve your game and if you can’t, you’ll get eliminated very early. Just look at someone like Rob Cross, who has an atrocious record in this event and can barely win a game.

Gerwyn Price came out and said he didn’t like double-start darts and then goes on and wins the tournament – so that shows what he’s made of and how he evolved.

The likes of Michael van Gerwen, Mervyn King and James Wade have more experience of this event and the format so when it comes around, they always seem strong and unruffled. They have a plan and know exactly what they’re going to do before they get up on stage.

Other players who don’t have a plan end up getting confused. Terry Jenkins once got up on stage, forgot it was double-start and went straight for treble 20!

I will never Mark Webster telling me how he used to prepare for this event. A month before it began he would spend hours on double top. Just double top.

Players like us would therefore completely ignore the prospect of ever going for a nine-darter because the only way you can do that is starting on double top or the bull. On that note I think Michael van Gerwen hits one this year. It’s been years since we had two in one match between Robert Thornton and James Wade.

Dirk van Duijvenbode made his debut last year but he had a plan that helped him go all the way to the final. He went for double 18s or double 16s – it was irregular, but it was a plan and it worked. If you don’t have one, you’ll be scrambled and panic.

The plan isn’t just your favourite double. What if your first dart blocks it? You need a second favourite double you are ready to go for without hesitation. Don’t look past two options because otherwise you’ll get confused. That’s what the debutants need to realise before they get up there.

It’s a great format and a real leveller, which is why I love watching it so much.

It’s a nightmare draw for both Gerwyn Price and Michael Smith in the first quarter and the only thing we can be sure of is that they’ll both be starting their legs on double tops.

As much as Dave Chisnall has a great pedigree in this tournament, he’s not really at the races right now and I fancy Mensur Suljovic to knock him out.

Martijn Kleermaker v Mervyn King and Joe Cullen v Ross Smith are both too close to call but ultimately I have to go with Price to come through the quarter, edging out Suljovic to reach the semis.

I fancy Suljovic as the biggest danger due to his recent return of form having reached the World Cup and Gibraltar Darts Trophy finals following a short break from the game. He’s also a good double-start shooter and will almost certainly be going for double 14s to start with. The advantage of aiming at that section of the board is that when you go a bit high or low you might fluke it into double 9 or 11.

As much as I recently wrote on these pages about Dimitri Van den Bergh v Luke Humphries being a World Championship final of the not too distant future, I’m not sure they’ll set up a second-round tie in this event.

That’s because I fancy Ryan Searle, who is superb at double top and doesn’t overthink the game, to knock Dimi out in round one before going on to beat the winner of Dirk v Duijvenbode and Humphries. Dirk’s confidence is a bit broken at the moment following a string of poor results so it’ll be interesting to see if Humphries can take advantage on his debut.

James Wade will obviously be very dangerous in this quarter given his pedigree in this tournament and although he isn’t playing to the same levels as he did at the UK Open, he still seems to always find something at double-start.

I think he’s the second best double-starter in the field and his opponent is debutant Damon Heta, who must have a game plan or he’s in trouble.

Wade will beat whoever comes through Stephen Bunting v Daryl Gurney before a clash with Searle, who I fancy to spring a surprise and thrive in this event.

This is probably the toughest quarter of the draw to call overall but I do think Peter Wright will avoid a first-round upset given how much Rob Cross seems to struggle at the double-start format.

Nathan Aspinall is playing really well right now even though he hasn’t been winning titles this season, but he does have a question mark over his double-start prowess.

If he gets past Krzysztof Ratajski - which is a tough enough clash as it is - then he’ll probably be up against Wright in round two!

After that it’s a small matter of a quarter-final with Jose de Sousa, Jonny Clayton or the dangerous outsider Callan Rydz.

De Sousa will beat a struggling Glen Durrant you feel but Clayton’s draw is a real tough one because Rydz knows double-start like the back of his hand having grown up in Northumberland where the format is played a lot locally.

I do believe Wright will end up playing Rydz, who stunned him at the Gibraltar Darts Trophy last weekend, but this time it will be Snakebite who triumphs.

The bottom quarter is a lot easier for me to call because I believe Michael van Gerwen is coming into such good form right now, while he’s become so comfortable in this format since breaking his major duck back in 2012.

He’ll be too strong for Danny Noppert in his first match and will probably have far too much for either Vincent van der Voort or Gabriel Clemens in his second.

As for the other four players in this quarter, I see Brendan Dolan as the one to watch given his love for this event and how hard he’s worked to climb back up the rankings over the past year or so.

He starts against debutant Darius Labanauskas while neither Gary Anderson nor Ian White are playing close to their best at the moment and don’t look as sharp as Dolan.

However, it should be MVG who ultimately progresses.

Who will reach the final?

My first predicted semi-final is Gerwyn Price against surprise package Ryan Searle but I’ve got to go with the defending champion to get through that one. It’s so hard to back against him right now because you could throw him into any challenge – even a game of cricket – and he’d find a way to win.

Peter Wright will then face Michael van Gerwen (again!) in the other semi-final and I fancy MVG to get revenge on Snakebite for his defeat at the World Matchplay.

Who lifts the trophy?

My first predicted semi-final is Gerwyn Price against surprise package Ryan Searle but I’ve got to go with the defending champion to get through that one. It’s so hard to back against him right now because you could throw him into any challenge – even a game of cricket – and he’d find a way to win.

Peter Wright will then face Michael van Gerwen (again!) in the other semi-final and I fancy MVG to get revenge on Snakebite for his defeat at the World Matchplay.