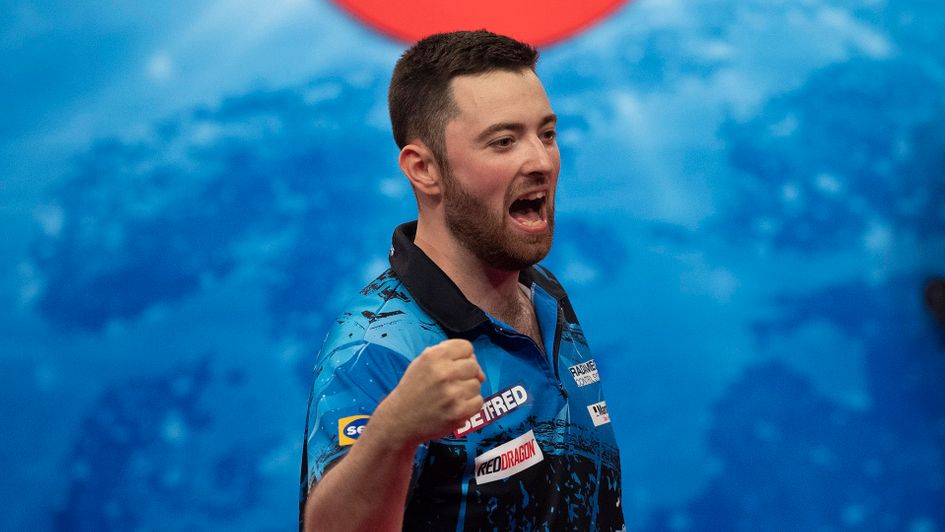 The double-start Boylesports World Grand Prix takes place in Leicester from October 3-9 - live on Sky Sports - and our tipster Chris Hammer brings you his preview and best bets.

Trying to pick a winner of any regular darts event feels harder than ever right now, so throw in the levelling nature of the double-start format and you could pretty much make a case for anyone charging through this 32-player field in Leicester.

They say past experience of this unique major is a key requirement for success but even the six players making their tournament bow shouldn't be written off for that reason alone when you consider how the fearless Dirk van Duijvenbode became the first debutant to reach the final since the inaugural edition way back in 1998.

There's been 17 different title winners from 30 events so far this season and 15 of them are in this field which illustrates how dangerous anyone can be on their day while of the 17 who haven't tasted success, six have reached tournament finals. The previous eras of small handful of players dominating is becoming a distant memory.

The first round of this tournament is particularly nerve-wracking to follow when your outright selections are in action - even Michael van Gerwen (2), Peter Wright (5) and Gerwyn Price (3) have crashed out at the earliest hurdle 10 times between them.

If you want to know every hopeful's key season stats as well as their World Grand Prix track records then check out my separate player-by-player guide but now I'll run through each quarter of the draw and somehow try to give you the winner...

Gerwyn Price is clearly a worthy favourite for the title, let alone this quarter, and his form at last weekend's Gibraltar Darts Trophy is grim reading for everyone else in the field. However, this is double-start darts and his first-round clash with Michael Smith could go either way.

Sure, Bully Boy has an awful record in this event having never gone beyond the second round in eight previous attempts while he's failed to beat Gerwyn Price in their last eight meetings which have included two Premier League draws last year - but over three sets of double-start darts, Smith is more than capable of springing a mini shock.

With that in mind I'm looking elsewhere for value in a quarter that could open up in the shape of Mensur Suljovic at a tempting 9/1.

The Austrian had ensured a pretty miserable season and even opted to pull out of the World Matchplay on medical advice, but since his bespectacled reappearance at the Hungarian Darts Trophy in September, he helped Austria finish runners-up to Scotland at the World Cup of Darts final while he also reached the Gibraltar Darts Trophy final last weekend.

He got may well have got battered 8-0 by Price but he'll have taken a lot of confidence from the weekend as a whole and the double 14 specialist will be looking forward to an event where he's reached the semi-finals on three occasions. Dave Chisnall is also a canny operator in this event but he's been out of form of late and if Price falls early, Suljovic could well take advantage.

Dimitri Van den Bergh heads the betting in this quarter but he could be in trouble early on against Ryan Searle, who is Sporting Life columnist Paul Nicholson's dark horse to reach the semi-finals.

The last time we saw Van den Bergh on the televised stage at the Nordic Darts Masters he dramatically fell to pieces against Fallon Sherrock with an 8-2 lead and although the defeat is no disgrace whatsoever, the manner of his collapse will be tough to get over and underlined how not even the best players are immune from crumbling under pressure - and there's no end of that in this tournament.

James Wade obviously has double-start pedigree having won this event twice and reached the latter stages several times but he's also crashed out in round one on nine occasions while he's not in the same kind of form that propelled him to UK Open glory earlier this year.

The player he beat in the final of that major - Luke Humphries - is my pick to come through this quarter at 6/1 while he's also worth an each-way punt at 50/1 to lift the trophy despite this being his debut.

The fearless two-time World Youth champion, who has twice reached the World Championship quarter-finals, is yet to win a senior title since excelling in the Development Tour ranks but the way he dismantled MVG at the UK Open underlined his rich potential in this sport and he backed that up by reaching three more Pro Tour finals only to come up short against Gerwyn Price, Jose de Sousa and Peter Wright, who all weighed in with monster 100+ averages.

He thrashed Wade 10-3 at the World Matchplay with a 101 average but his 98.23 wasn't good enough against a ruthless Ratajski in the next round. Even so, he proved he loves being up on the big stage.

His first-round opponent Dirk van Duijvenbode, who is currently on a poor run of form, proved last year that debutants can succeed at double-start if they come into the event with a cool had and a solid game plan and if Humphries can do that then we could see his rapid ascent finally result in a dramatic maiden senior title - just like what happened to Van den Bergh at last year's World Matchplay.

Interestingly, he could well face his fellow former World Youth champion in the second round - a fixture that resident Sporting Life columnist Paul Nicholson believes could be a future Ally Pally final.

I'm not sure what's a more difficult challenge - any of these players coming through this quarter of death or a punter trying to predict it.

Peter Wright has been the most successful player this season in terms of total titles won with six, including the World Matchplay, while Jonny Clayton is close behind with four but two of those have been the televised Premier League and Masters.

Jose de Sousa, who has picked up three, boasts the second highest average on the circuit (98.83) while his rate of 180s per leg (0.35) is bettered by Dimitri Van den Bergh and Dirk van Duijvenbode (both 0.36).

Nathan Aspinall was an also run in need of improvement for much of the first half of the season but a World Matchplay quarter-final run boosted his confidence and he produced the standard we know he's capable of at last weekend's European Tour event in Gibraltar, where he lost to Gerwyn Price in the semis.

He too has an awful opening tie against the ever dangerous Krzysztof Ratajski but I just wonder if his trademark character and mental strength is ideal for this format if he can get to the latter stages.

The only reason his seasonal average is a fairly mediocre 95.48 - which is 20th best in this field - is mainly down to his sluggish first couple of months of the campaign when he was in the low 90s and high 80s a lot. He's weighing in with plenty more 100+ averages now and this could be the start of a great winter.

Keep an eye on Callan Rydz causing an upset in the first round against Clayton. The rising star may well be making his debut but he'll have played double start a lot on the local scene in Northumberland and looked in great form last weekend.

The bookies have this quarter priced up as a two-horse race between Michael van Gerwen and Gary Anderson but based on seasonal form you have to say Brendan Dolan could be the Dutchman's biggest threat.

The History Maker, who reached the 2011 final, has worked phenomenally hard over the past 18 months to climb back into the higher echelons of the game and is actually averaging marginally higher than Anderson (95.51) this season with 95.92 while he's also won a Players Championship title back in March and reached another final in July.

Of course Anderson tries to pace himself these days so he turns up all guns blazing for the biggest events that he targets but I do feel 4/1 is too short based on what we've seen from him this year.

Few would give Dolan much of a chance against MVG in the quarter-finals but the format is still a relatively short best of five set encounter and let's not forget how he took Gerwyn Price to a deciding leg in the third round of the World Championship last December before bowing out 4-3.

Who will lift the trophy?

Clearly I'm not expecting all my value quarter selections to come through - even though it would make for a refreshing semi-final line-up if they did - but out of those four I'm singling out Luke Humphries and Nathan Aspinall as the two I'm most confident can mount a serious title charge.

If you prefer backing the favourites in each quarter then Sky Bet will actually give you 66/1 for Price, VDB, Wright & MVG all reaching the semi-finals but you'd think the levelling format and the wide range of other strong contenders will scupper at least one of those big guns chances.

Of the big three, I'd probably side with Wright despite his very tough quarter because if anything it could ensure he hits the ground running early on and stays focused just like he did during his brilliant World Matchplay. But from a betting point of view, they are all so short in a tournament with obvious dangers.