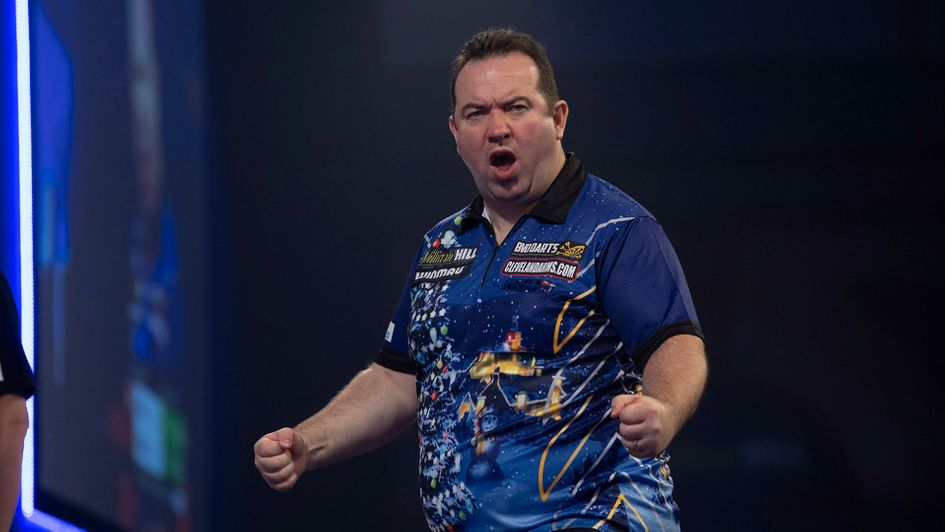 Brendan Dolan won his eighth ranking event with a superb triumph in Players Championship 5, which culminated in an 8-6 defeat of Michael Smith in Tuesday's final as PDC Super Series 2 began in Milton Keynes.

The Northern Irish star produced arguably his finest ever day of darts as he scooped the £10,000 title in the first of four Players Championship events being staged at the Marshall Arena this week.

Dolan had opened the day with a personal best recorded average of 111.2 in his first round win over Jason Lowe, and after seeing off Jamie Hughes 6-2 he repeated that scoreline to see off World Champion Gerwyn Price.

The Northern Irish ace then averaged over 106 in his last 16 win over Damon Heta and a huge 109.5 in the quarter-finals against Scott Mitchell, before enjoying a 7-4 win over Joe Cullen in the semis.

Lisa Ashton's bull-25-bull checkout is even more unreal with those chunky darts! pic.twitter.com/lThMa5yEwN

Dolan, though, broke back to level in 11 darts and the pair sat level after 12 legs before the former World Grand Prix finalist pounced when Smith missed a dart at a double in each of the next two legs for ton-plus checkouts as he closed out an 8-6 win.

Dolan's last tournament wins had come with a brace of Players Championship titles in 2019, and he is determined to force his way back into the world's top 32 as this year progresses.

Brendan Dolan beats Michael Smith 8-6 to win on day one of PDC Super Series II and picks up his eighth PDC title.

What a day for the Northern Irishman! pic.twitter.com/HDCoAOFjO0

"I've changed a few things," admitted a delighted Dolan. "I want to win tournaments and you need a bit of luck on the day, and possibly somewhere along the line I've had a bit of luck.

"I felt today that my performance level, my scoring was a lot better. I've won ProTours before and my finishing was clinical but today I thought I thoroughly deserved it.

"The standard was good at the top when I first started, but now it's that good at the bottom so you have to raise your game.

"I want to win more. I'm fed up of just taking part, and for a few years I was happy just to be here with the best in the world. Now I'm not happy to do that, I want to be better than them."

Smith had been a back-to-back Players Championship winner in the PDC Winter Series last year, and enjoyed his best run so far in 2021 as he soared into the final.

After battling past Gavin Carlin 6-5 in the first round, he would drop only three legs in his next four matches, with his displays including a 106 average as he defeated Lisa Ashton 6-0 to follow an earlier whitewash of Luke Woodhouse.

He also overcame Berry van Peer and Ryan Searle, but was taken all the way to a deciding leg for a second time in the day at the semi-final stage before edging past Alan Soutar to book his spot in the decider against Dolan.

Soutar's run to the last four continues his impressive start to life on the PDC circuit after winning a Tour Card last month and reaching the quarter-finals of Players Championship 3.

Joe Cullen's bid to win a second Players Championship of 2021 had seen him average a huge 111 in his last 32 win over Max Hopp and 105 in his quarter-final defeat of Ryan Joyce, before Dolan ended his hopes.

Van Duijvenbode was another player in fine form as PDC Super Series 2 began, averaging 112.7 in his last 16 defeat of Mensur Suljovic to follow earlier averages of 109.9, 102.7 and 106.9 as the Dutchman reached the quarter-finals.

The last eight line-up was completed by 2020 Players Championship event winners Searle and Joyce and former Lakeside Champion Mitchell, in his best run since winning a Tour Card last month.

Four-time Women's World Champion Ashton reached the last 16 for the second time on the PDC ProTour as she defeated Nathan Aspinall, Aaron Beeney and Adrian Lewis on Tuesday, before losing out to Smith.

She produced an eye-catching 125 checkout going bull-25-bull despite having chunkier darts than most!

Tuesday's tournament saw Ritchie Edhouse and Wayne Jones achieve nine-dart finishes to continue the trend of perfect legs in each of this year's Players Championship events.

The PDC Super Series 2 action continues on Wednesday with Players Championship 6, as the 128 players compete for a further £75,000 in prize money from 1400 GMT.

Live streaming from two boards simultaneously throughout the event will be available in PDCTV at video.pdc.tv.