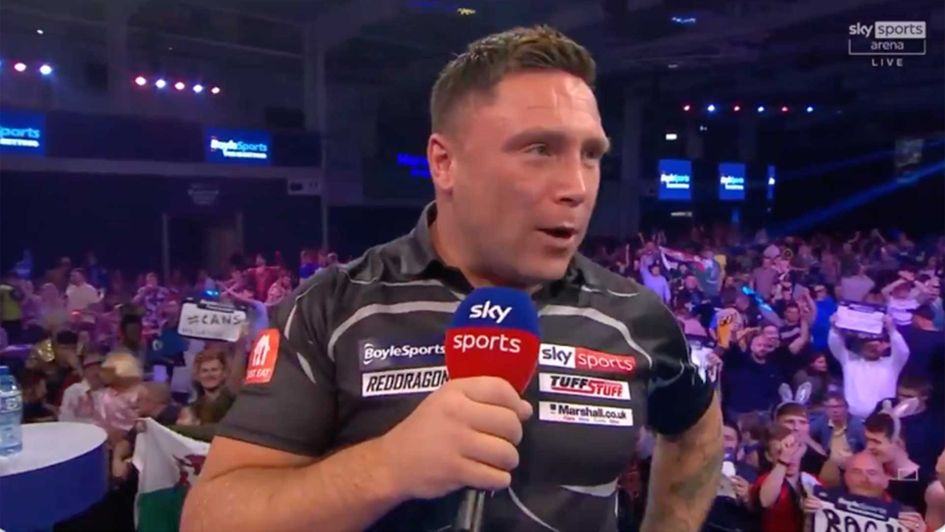 Scroll down to watch Gerwyn Price branding the crowd rubbish

Gerwyn Price thrashed Dave Chisnall 3-0 to reach the Boylesports World Grand Prix semi-finals and then branded the Leicester crowd "a bit rubbish" for booing him.

The defending champion wasn't at his best despite the scoreline, averaging just 87.58 and failing to hit a single 180, but he still managed to make Chizzy pay for his woeful doubling at the end of legs.

Chisnall, who fired in six maximums, had no problems getting away as he pinned 50% of his starting doubles only to spurn 17 of his 20 attempts to finish.

Price was pumped up throughout the contest as he defied a crowd largely rooting for Chisnall at the Morningside Arena and afterwards he made his feelings known by branding them "a bit rubbish" and "pathetic".

He said: "There's a lot more in the tank but it was a difficult game, obviously the crowd were a bit rubbish again as you can hear, but I won. No matter what they do I'll keep winning. The crowd are absolutely pathetic but I won."

Gerwyn Price really not happy with the crowd despite his win, branding them a "bit rubbish" and "absolutely pathetic" for booing. In no mood to be encouraged about those who were cheering for him either...pic.twitter.com/MQAt9WkxFM

Sensational 16-T16-Tops 104-out from Price there who crucially doubles his lead by clinching the deciding leg of Set Two! pic.twitter.com/CuaY4dnaYy

Price will now meet Stephen Bunting in a repeat of their World Championship semi-final after the Bullet came from a set down to defeat Ryan Searle 3-1 to reach the last four of this major for the second time.

The St Helens thrower, who reached the semi-finals on his double-start debut in 2014, took a while to get going as Searle took a scrappy opening set 3-1 but he then restored parity by reversing the scoreline in the second.

Bunting pinched the third 3-2 after Searle had spurned six set darts to take it 3-1 while the fourth also went the distance, with Heavy Metal missing three more attempts at double before busting his score when he found the 20 bed instead of the one.

Stephen Bunting sets up a semi-final clash with Gerwyn Price after closing out a 3-1 success over Ryan Searle!

Earlier, Jonny Clayton's bid to win a third televised title of the season - but his first that's ranking - continued with a thrilling 3-2 victory over Krzysztpf Ratajski.

The Masters and Premier League champion, who also won the televised World Cup last year, started brilliantly as he raced through the opening set 3-1 thanks to hitting 58% of his starting doubles and 68% on his finishing ones, but the Polish Eagle edged deciding legs in each of the next two as he moved into a 2-1 lead.

One apiece here as Krzysztof Ratajski punishes Clayton busting 134 and he pinches the deciding leg of the second set! pic.twitter.com/AdaohFiPqb

Clayton burst back into life by taking the fourth 3-0 with legs of 15, 13 and 15 darts while he maintained that momentum during the final set with finishes of 47 and 69 before closing out the win on double eight.

He told www.pdc.tv: "I got there in the end. I'm happy to be in the semi-finals and I'd love to win this. I'm playing well but I couldn't relax. The pressure of these matches is immense."

Jonny Clayton clinches his spot in the semi-finals after a hard-fought 3-2 victory over Krzysztof Ratajski!

Clayton will now face Danny Noppert as the Dutchman continued his dream run with an outstanding 3-1 win over Ian White, who suffers his 10th televised quarter-final defeat out of 11.

Noppert knocked out Michael van Gerwen and Vincent van der Voort in the previous rounds and an imperious display on the outer ring - and bullseye - sent Diamond packing.

Noppert also weighed in with the highest checkout of the match from 116 to complete a 12-darter in the fourth set before taking out 86 on the bullseye to reach his third PDC televised semi-final, having also achieved the feat at the 2018 Players Championship Finals and the 2019 World Series of Darts Finals, which he lost to MVG in the final.

"I can't believe I'm in the semi-finals," admitted Noppert. "I played brilliant this game and I'm really happy with my own performance.

"My finishing is going well, this crowd is amazing. My performances are really steady this week so far, and I think this is the best I have played on stage.

"Years ago my performance was not good on stage, but now it is."

Danny Noppert continues his sensational run at the 2021 BoyleSports World Grand Prix as he secures his spot in the Last 4 with a 3-1 win over Ian White!