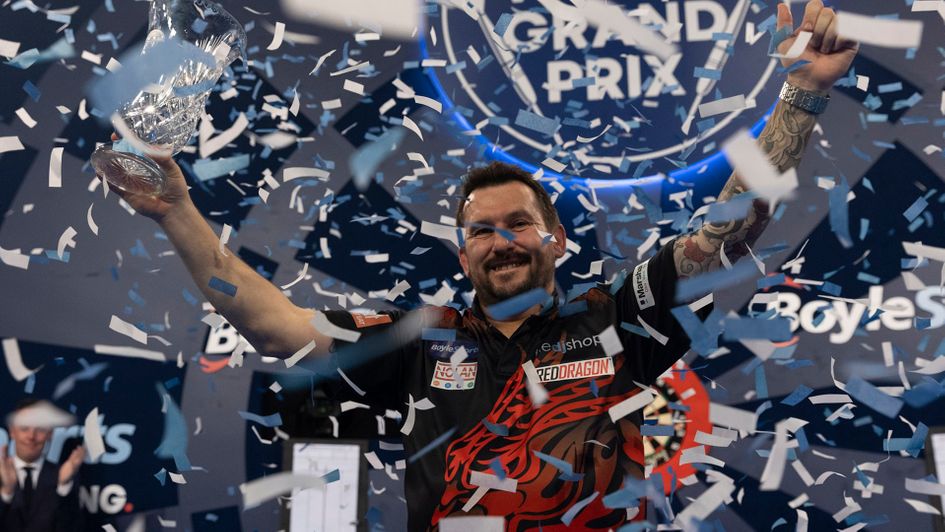 Jonny Clayton is a major winner and people's champion because his only change has been his performances, writes Paul Nicholson

Paul Nicholson discusses why Jonny Clayton has made such an astronomical rise in darts over the past year and why he's so popular.

The Ferret was recently crowned World Grand Prix champion thanks to a 5-1 demolition job of Gerwyn Price in the final while he's also lifted the prestigious Masters and Premier League titles as well as two Players Championship events this season.

Now ranked seven in the world, many expect Clayton to achieve even greater success in the coming months and years so in this latest column, The Asset reflects on the Welshman's astonishing rise.

Back in 2010 – a few weeks after I won my major title at the Players Championship – I went to watch my county team, Northumberland play Pembrokeshire at the Marlborough club in Newcastle. I got slated by my own home team-mates because I hadn’t played for them in a long time and they claimed I was just there to gloat.

I didn’t even know Jonny Clayton was in the room that day representing Pembrokeshire even though he was one of their best players. Little did I know 11 years later he'd be one of the best players in the whole world! He didn't go seeking attention then and he still doesn’t now. Fame – locally or global – finds him.

Some players cross the room to tell you how good they are at any level. Others sit there and don’t care what you think. They just want to play and let the darts do the talking. Jonny Clayton and Gerwyn Price are similar in that regard, even if they go about it in totally different ways!

Jonny doesn’t want to be seen as a big personality that has some kind of gimmick, while he doesn’t want to be a social media star away from the board either. He just wants to play darts, make money for his family and be known for what he’s best at.

It is this that makes Clayton so popular, he’s like the Welsh Hendo. Everyone loves him because he’s the same person now as when he joined the professional ranks. The only difference is the amount of titles he’s now winning and the standards he’s producing.

We’ve always said that confidence is intangible, and he’s proved that beyond all doubt since he teamed up with Price to win the World Cup last year.

🏆🏴󠁧󠁢󠁷󠁬󠁳󠁿 Wales are World Cup of Darts winners for the first time thanks to Gerwyn Price and Jonny Clayton!

🤩 Their 3-0 win over England in the final completed a mesmerising three days from the Welsh Dragons.pic.twitter.com/z4PeZ8ZokV

However, he’s not come from nowhere – he’s been around a while now and played a lot of BDO darts with no success before winning the Europe Cup team event with Wales back in 2014 which proved to be a springboard for him as he subsequently won his PDC Tour Card at Q School in 2015.

It’s therefore quite fitting that his platform to build major success upon as an individual in the PDC came in another team event five years later.

Before lifting that World Cup, we’d have probably all put Jonny in a category below almost everyone in the top 16 in the world, especially the major winners. And in the space of 12 months he’s way ahead of most of them!

In my opinion, in the all-time list, he’s probably even above Colin Lloyd who is a former world number one and a two-time major winner. In those unofficial rankings, Jonny was below me last year because he didn’t have a major and now he’s ridiculously far ahead of anyone of my ilk!

While most of us didn’t see Clayton coming to this extent, one man did – Gary Anderson. He seems to have a crystal ball where he can spot potential way before anyone else and he once said that Jonny would be special. He couldn’t have been more right.

🏆 Wins the Masters to qualify for the Premier League

🤑 What a season for Jonny Clayton, who is now £250,000 richer!pic.twitter.com/kgquU4gPZF

It’s not just about major titles either. Statistically he’s frightening the world of darts to death! His personal best average is over 112 and he’s managed to record a 100+ average on 49 occasions this season alone!

His three-dart average of 98.68 this season puts him among the top four this year and he’s hardly gone through a lean spell all year – apart from losing in the first round of two European Tour events which cost him a place at the European Championship.

Now his success at the World Grand Prix shows he’s right back at the top of his game ahead of a huge winter of majors, culminating in the World Championship.

The biggest change in Clayton this year is how he’s turned into a player who can average consistently high and produce great performances for a sustained period over a season rather than a few days or tournaments here and there.

We’ve seen him in many events down the years where he’s put in enough big numbers to show he has potential while he never seemed fazed about playing against the world’s best – if anything the challenge seemed to bring out his best.

Stepping out of Price's shadow

His clash with Price at the World Grand Prix did feel like two tag team partners breaking up for an individual title shot, of-course when you consider how many times they’ve played alongside each other rather than against each other over the past few years.

To think that came the leg after Clayton's 170 checkout denied Price an attempt at tops!pic.twitter.com/NUzleVFzLU

If we continue the wrestling analogy, you could say Price is currently the Shawn Michaels of the two and Jonny Clayton is Marty Jannetty - let’s just hope Price doesn’t super kick Clayton through a window if his success continues!

Despite having lost six games in a row against Price since 2018, you wouldn’t have thought there was any psychological advantage given the way the match panned out. Clayton is just a ‘give me the darts and let’s get on with it’ kind of player. I think the way he’s balanced darts with his career as a plasterer and his family life has helped him thrive.

It’s as if he knows that losing a darts match isn’t that big a deal whereas many others, including me, took it too personally. There was a Kiwi darts player called Phil Hazel who used to say to everyone “when you lose, you have three minutes to be p****d off, then you move on.” Jonny has taken that to the next level and made it 90 seconds!

Perhaps if darts was all he did and his earnings depended a lot more on it, maybe his mindset would be affected more negatively than the potential upside of having more time to practice even harder.

If I were him, I wouldn’t change a thing.

As for the future, the only way is up and it could be very quickly. Not only will he be in contention for trophies and ranking points for the rest of this season but he’s not defending much money next season.

He’ll have favourable draws in the majors due to his new career high ranking, which might be even higher by the start of 2022, and any lengthy runs will mean big profits and more climbing.

As long as he gets his scheduling right, the world’s top four is just a matter of time and you wouldn’t be surprised to see him win the biggest prize of the lot.