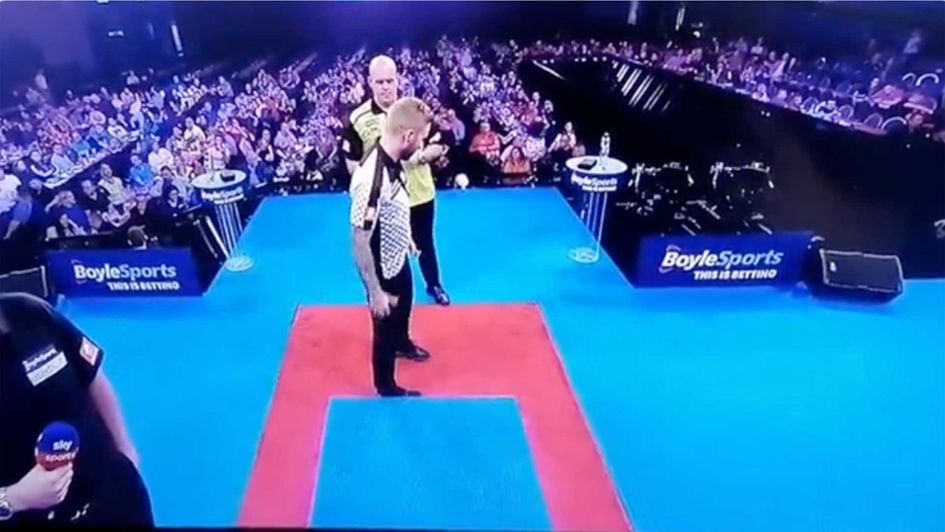 Darts results: Michael van Gerwen accused of stamping by Danny Noppert, who knocked him out of the World Grand Prix

Michael van Gerwen, Peter Wright and Gary Anderson all crashed out of the World Grand Prix as the first round concluded in Leicester on Monday night.

Van Gerwen found himself in big trouble after losing the opening set to fellow Dutchman Danny Noppert but he looked like he'd bounce back in the second when he took the first leg in sensational fashion.

After opening with a 'perfect' 160, MVG then fired in a 171 to leave himself a 170 checkout, which he agonisingly nearly finished only to miss the bullseye by fractions.

It would have been just the fourth World Grand Prix nine-darter in history but he did manage to complete a highly impressive 11-darter after Noppert spurned an attempt at double 11 to steal the leg.

That would have been one of the greatest nine-darters in HISTORY!

Noppert hit a superb 103 checkout under huge pressure as he twice came from behind to force a deciding leg in which both players failed to hit a double with their opening visit.

However, the underdog fired in three successive scores of 125, 140 and 140 to leave himself 56, which he took out in two darts to complete a stunning victory.

Noppert, who averaged 96.72 compared to MVG's 90.55, hit three of the five 180s and boasted superior starting double success of 45%-36% and also a higher checkout percentage of 50%-40%, can celebrate just his second victory over MVG in seven matches, while this is also his first on TV.

However, there was no handshake at the end, with Noppert saying in his post-match interview: "After the first set we had some problems behind the stage because I thought he was stamping on the floor when I was on a double."

Sky Sports commentator Wayne Mardle attempted to clear the matter up as footage showed no clear sign of a stamp during a moment when Noppert looked distracted.

Wayne Mardle clears up the incident that upset Danny Noppert during his victory over Michael van Gerwen. @Wayne501Mardle pic.twitter.com/tACqRAu94z

Wright was also among the front runners to lift this trophy for the first time in his career after a superb season in which he'd won more titles than any other player with six, but his quest to end that wait continues for another year.

The World Matchplay champion has now only won a single match in this double-start tournament in his last three appearances since reaching the 2018 final while Cross is through to the second round for just the second time at the fifth attempt.

Snakebite, who averaged 84.7 compared to his opponent's 85.6 in a below-par contest in terms of quality, simply never got going as Voltage cruised through the first set 3-1 while he made the most of Wright failing to hit a double in his opening visit of the deciding leg in the second to complete a straight-sets triumph.

It's a second consecutive first round World Grand Prix exit from Wright!

Gary Anderson's hopes of finally adding the World Grand Prix to his CV were also ended as he fell to Ian White at the first hurdle.

White - on his return to action for the first time in two months after undergoing an operation in August - came from two legs down to win the opening set 3-2.

He also led 2-1 in the second, but missed two darts to close out victory in the fourth leg as Anderson kept his hopes alive with a 14-darter and then took the decider to level the tie.

An edgy final set also went all the way to a deciding leg, with White being first to a finish only to miss his chance in three visits - but when Anderson was unable to post tops he returned to finally pin double eight for victory.

Jose de Sousa is now the only remaining seed in the bottom half of the draw, after the Grand Slam of Darts champion dropped just one leg in defeating Glen Durrant.

De Sousa will now face the reigning Premier League champion, Jonny Clayton, on Wednesday after the Welsh ace celebrated his 47th birthday in style against Callan Rydz, clinically dispatching the debutant for the loss of just one leg.

Premier League champion Clayton finished six doubles from ten attempts and also opened with half of his darts at a starting double - almost double the percentage of his opponent.

Rydz shared the game's opening two legs, but Clayton won the next two to wrap up the first set and followed up a 14-darter with a roof-raising 170 finish as he claimed set two without reply to book his last 16 place.

Darius Labanauskas enjoyed a winning debut in the double-start event with a 2-1 defeat of 2011 finalist Brendan Dolan.

The Lithuanian came from 2-0 down to win the first set with three straight legs, only for Dolan to post an 88 checkout and a 13-darter as he won the second without reply to level.

Labanauskas, though, was on hand to win the third with three straight legs - including a 14-darter to break throw - as he celebrated a milestone in his career.

Vincent van der Voort claimed an impressive straight sets win over Gabriel Clemens to book his second round spot in style in Leicester.

The Dutchman found himself 2-1 down in set one following a strong start from Clemens, who finished 96 to break in leg three only to see Van der Voort take out 104 for a 14-darter to level and 82 to win the set's deciding leg.

Clemens led 2-0 in set two, but Van der Voort finished tops and double five to level before checking out 61 to complete the win.

Krzysztof Ratajski enjoyed his first win in three attempts in the double-start format, coming from a set down to defeat Nathan Aspinall 2-1.

Aspinall had come from a leg down to land back-to-back 14-darters as he won the opening set in a deciding leg, only for Ratajski to land three 14-darters of his own as he took the second in the same manner.

Aspinall shared the first two legs of the third, but paid for one missed double in leg three as Ratajski moved 2-1 up before capitalising on 11 missed starting doubles from his opponent to close out the win.