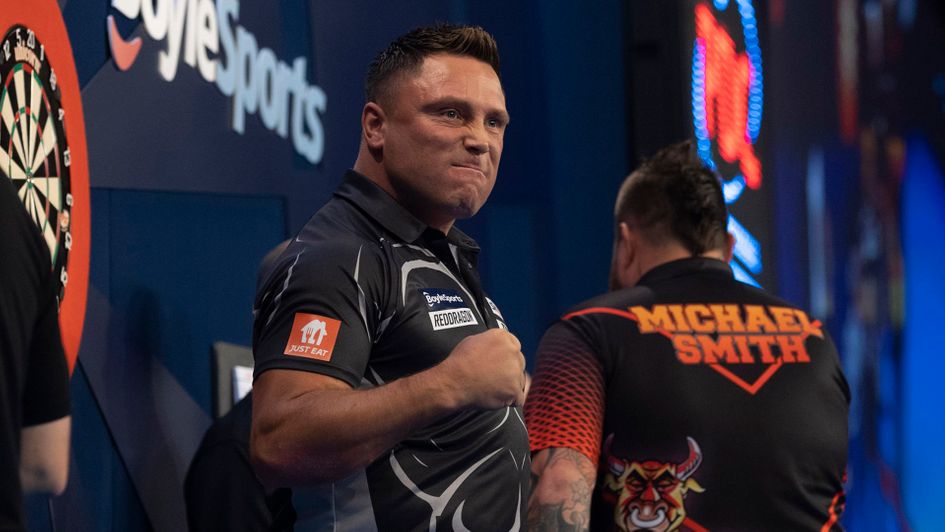 The second round of the World Grand Prix begins on Tuesday night so check out Chris Hammer's match-by-match predictions, best bets and a suggested acca.

Double-start darts never fails to create drama and Monday night certainly had plenty of that as Michael van Gerwen and Peter Wright both suffered shock exits at the hands of Danny Noppert and Rob Cross.

Defending champion Gerwyn Price is now the sole surviving member of the 'big three' as he prepares for second-round action tonight against Mervyn King while there are three other best-of-five set matches to enjoy.

SL Acca: Click here to back Humphries and Price both to win with most 180s at 9/2 with Sky Bet

Unfortunately Luke Humphries is my only outright tips of the tournament remaining after Nathan Aspinall bowed out in agonising fashion against Krzysztof Ratajski but we all knew how unforgiving the first-round is to our predictions.

That said, Cool Hand weighed in with quite an accomplished display in beating last year's runner-up Dirk van Duijvenbode 2-0 and now he's got a sense of what this format is all about, he'll be confident of overcoming a player he defeated en route to the UK Open final back in March.

Fellow debutant Ryan Searle showed exactly why Paul Nicholson rated him as a genuine dark horse on these pages with comfortably one of the best performances of the round during an enthralling 2-1 victory over Dimitri Van den Bergh that required him to hold his nerve in a deciding leg.

However, I'm obviously going to stick with Humphries and also throw in most 180s considering how much more prolific he's been on the maximums this season, with 0.28 per leg compared to Searle's 0.24.

Stephen Bunting brought home our night one double in quite some style with a stunning 2-0 victory over Daryl Gurney in which he averaged just shy of 100, finished ruthlessly and produced three 100+ checkouts.

That latter statistic, which is mightily impressive in such a short match, was no surprise really considering he's won 15.60% of his legs this season with a three-figure finish - a percentage that is second only to Glen Durrant's 17.11%.

James Wade also ranks in the world's top 10 in that metric across the year and demonstrated why with two brilliant 121 checkouts in the third set of his clash with Damon Heta, including one under immense pressure in the deciding leg when the Aussie waited on 60 for the victory.

Bunting, who has made great strides this year after beating Wade en route to the World Championship semi-finals last December, will certainly attract interest at 6/4 but over a slightly longer format, the Machine's unflappable coolness on the starting doubles could prove hard to live with.

That said, we should still see at least four sets and plenty of high quality finishing so I quite fancy the 5/4 about there being three or more 100+ checkouts at 5/4.

Gerwyn Price became just the sixth player in World Grand Prix history to record an average of 100+ but still had to ride his luck against Michael Smith to avoid a nervy deciding set after Bully Boy spurned three clear darts at double 16.

The Iceman was waited on 81, which he took out in two darts, and you have to say it's another example of how his presence and the knowledge of his ruthless finishing piles pressure onto his opponents. He's won 14 of the 17 last-leg decider he's played this season and while this was 'only' a set decider, the result was the same.

Apart from that he hammered in the 180s across just nine legs and was almost 50% on both his doubling stats so it's going to take some performance to beat him from this point onwards.

Has Mervyn King got it in him? On his day, the 2012 runner-up is obviously still a threat for any player in the world, as we saw when he reversed the result he suffered at the hands of Price at the Ally Pally last year when defeating him in the semi-finals of the season-opening Masters...in a deciding leg.

However, Price's had spent most of that month out of practice due to all his media commitments and TV show appearances whereas now he couldn't be more focused ahead of this big winter of majors.

The defending champion should come through comfortably enough and even if it's 3-0, I'd still expect him to hit his Player Performance targets of 2.5 180s and a checkout over 97.5 at 11/10.

Dave Chisnall avoided a first-round exit at the World Grand Prix for a seventh successive year after coming through a real battle with Mensur Suljovic and you have to wonder whether the double-start specialist can now use this major to give his season a real lift.

The two-time runner-up now faces a debutant in Ross Smith, who brushed aside a very disappointing Joe Cullen with an impressive 91.45 average and 70% success on his starting double.

Such a stat in this format would knock the stuffing out of any opponent while of his seven opening visits - in which he opts for the double 16 to treble 19 transition - he only missed three starting doubles and they all came in one leg, while he also managed two 100+ scoring starts.

He basically didn't look much of a debutant and if he's anything close to those levels tonight then Chizzy will be in bother. That said, over best of five sets and increased pressure, 70% doubling-in is almost unthinkable so it'll be interesting to see how he copes when he inevitably starts to miss.

The aspect of the game we can be more confident about is the 180 hitting, with both players jointly ranked fourth in the world for maximums per leg this season with 0.32.

They both managed two apiece in the last round and you can get 13/8 on them each doubling their tallies or better tonight.