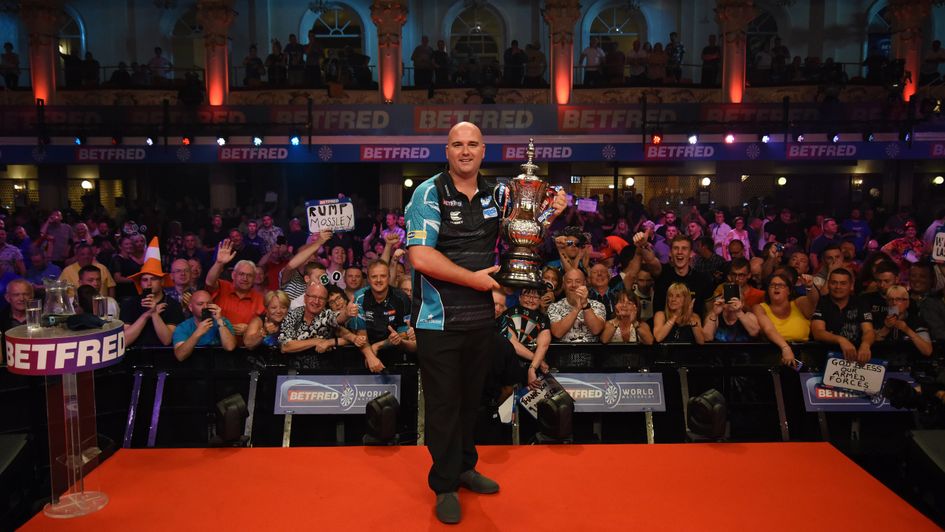 Rob Cross won the World Matchplay when it was last staged at the Winter Gardens (Picture: Lawrence Lustig/PDC)

The World Matchplay returns to Blackpool this weekend and our Paul Nicholson brings you his big five and his outsiders to watch.

This is the moment all darts fans have been waiting for throughout such a long and difficult 18 months. We’ve had little injections of small crowds at some events along the way, but this is different. This is Blackpool. This is the World Matchplay.

Although we're looking forward to the opening weekend, it’ll be Monday night when the Winter Gardens will be well and truly rocking with a much bigger crowd and that when we’ll finally feel that darts is home.

I’m starting to get the feeling that Michael van Gerwen (9/2) might end up having one of those seasons which all great sports people do from time to time when they hardly pick up a title – or none at all. He’s playing well but he won’t be part of my ‘big five’ in Blackpool.

Also omitted is Premier League champion Jonny Clayton (14/1), who also won the season-opening Masters, but I feel he’s just come off the boil a little bit in recent weeks and because he’s 16th seed, he could well end up playing Gerwyn Price in round two.

So here are my picks…

Although Gerwyn Price hasn’t won a title since his Premier League exclusion, he has produced explosive performances on numerous occasions during the last two Super Series in June and July, so I do feel he’s starting to peak again for when it really matters.

In the most recent batch of four Players Championship events last week there were times where you felt he wasn’t going to miss anything and while he couldn’t quite bag himself a title, he is a worthy favourite to win the World Matchplay for the first time.

Just like at the end of June’s Super Series, Peter Wright had the last word again last week by winning the final tournament with a string of incredible displays.

He was quite simply unbeatable and even when Michael van Gerwen just missed out on a nine-darter in the final, Snakebite pulled out a 144 checkout – straight after a 180 - to pinch the leg just to rub salt into the wounds. He can do things that not many other players can so he’ll be very dangerous.

What more is there to say about Jose de Sousa that hasn’t already been splattered out??!!

The biggest shock was that he didn’t win a fourth Players Championship title of the season last week but he was runner-up in one of the events to Chris Dobey and also reached two semi-finals, losing to Van den Bergh and van Gerwen.

The defending champion has to be on my list because he’s currently enjoying the best season of his career from a consistency point of view and was also brilliant during the Premier League on debut.

He doesn’t want to let that trophy go and having won it behind closed doors in Milton Keynes, he’ll be itching to do the same at the event’s spiritual home in Blackpool.

There’s something about Rob at the moment and he’s flying nicely under the radar so it wouldn’t surprise me whatsoever if he makes a big run and manages to defend a big chunk of the prize money he picked up here from two years ago when lifting the trophy.

This might shock a lot of people, especially as he got relegated from the Premier League on the Judgement Night despite a promising start to the campaign, but he’ll be delighted to be back at the Winter Gardens for the first time since proving many people wrong during that magical week in 2019.

Glen Durrant, as everyone knows, is struggling badly at the moment and has only managed to win nine times on the ProTour this season. He lost all his Premier League games too so it’s going to take a lot of time to build his confidence up.

Joe Cullen was looking so good last month when picking up a second title of the season but during the most recent Super Series he lost five of his six matches, including one against Durrant with an 83 average, so he clearly has something negative on his mind right now.

Krzysztof Ratajski has played some good stuff at points this season but it’s all in short bursts and he has really struggled to put long runs together, not reaching a quarter-final since March.

There’s question marks over many other players because the titles haven’t been shared out as much and one of those is Dave Chisnall, who hasn’t really got close and you just wonder if he was affected by missing out on the Premier League.

It’d be typically him to go on a big run when few are expecting it because he doesn’t really care about form – he just gets up and does it – and he is of course one of the home favourites from up the road in Morecambe.

He’s perhaps an obvious pick based on the fact he was the top qualifier from those on the ProTour list but some of the performances he put in over the last four days of the Super Series were outstanding, while he reached a final of one of the tournaments before losing to Ross Smith.

Nobody will want to play him and he can beat anyone when he gets on a roll and Krzysztof Ratajski will be very wary of him ahead of the first round, and so will James Wade, Rob Cross and Glen Durrant in his quarter of the draw.

Some of the levels he was showing during the last Super Series were incredible and he really is turning into an elite player.

He put in three personal best averages in the space of 48 hours which is remarkable. He averaged 110.57 and 111.33 in back-to-match matches before finishing runner-up to Jose de Sousa and two days later he upped that to 112.24 on a day in which he posted two more of 100+!

You have to take notice of this and nobody will want to play him. It would be fantastic if he plays Gary Anderson in the semi-finals because they practice together and that’s one reason why he’s really making great strides this season.

My outsider of the unseeded players is Vincent Van der Voort, who reached the 2020 quarter-finals in Milton Keynes and could so easily have gone further.

He needs to handle the heat and get some good medical advice on his back – because he has experienced some issues of late – but nobody will like playing him. You’ve got to bare in mind many players in the field are making their debuts or are relatively inexperienced at this level, whereas Vincent is ready for anything.

I remember making my Winter Gardens debut and although I’d experienced the Ally Pally before, nothing really prepares you for this special venue and I was overawed. I was a cat in headlights against Steve Beaton in 2010 and it got to me. I never enjoyed one match there and I wasn’t the only one, such as Kim Huybrechts and Robert Thornton.

Best of the rest

Chris Dobey (66/1) and Ross Smith (80/1) both bagged their maiden PDC titles to seal their places in the World Matchplay field while Stephen Bunting (66/1) won his first since 2015 to ensure he gets another crack at major glory. All three will be high on confidence and pose a real threat to their opponents.

Dobey had to come from the biggest distance at the Super Series in terms of the qualification race for Blackpool and even on the days he lost, he was still playing well.

He’s starting to find a performance consistency that he perhaps hasn’t had before and can easily find a big average on these TV stages.

Damon Heta didn’t impress too much during the last Super Series so he’s got some questions to answer and Devon Petersen isn’t playing well at all.

The majority of his ranking money is from 2020 but over the last 12 events there’s not enough proof to suggest he’s the second best qualifier. I’d expect him to get knocked out by Dimitri Van den Bergh.

Ian White’s form hasn’t been great and he subsequently heads to Blackpool as an unseeded player but this will at least mean he doesn’t have the pressure of old and he may revel as an underdog for a change.

The event will have a slightly different feeling than usual with some familiar faces failing to qualify in Adrian Lewis, Simon Whitlock, Raymond van Barneveld and Steve Beaton.

They never really put themselves in serious contention during the last four Players Championship events before the qualification cut off at last week’s Super Series, with Barney finishing ‘closest’ at £22,000 on the Pro Tour Order of Merit, which was still £6,000 behind where he needed to be.

That said it wasn’t a bad effort from him considering he only got his card back in January but ultimately I think his more realistic objective is to be back next year, and on what we’ve seen so far, he probably will.