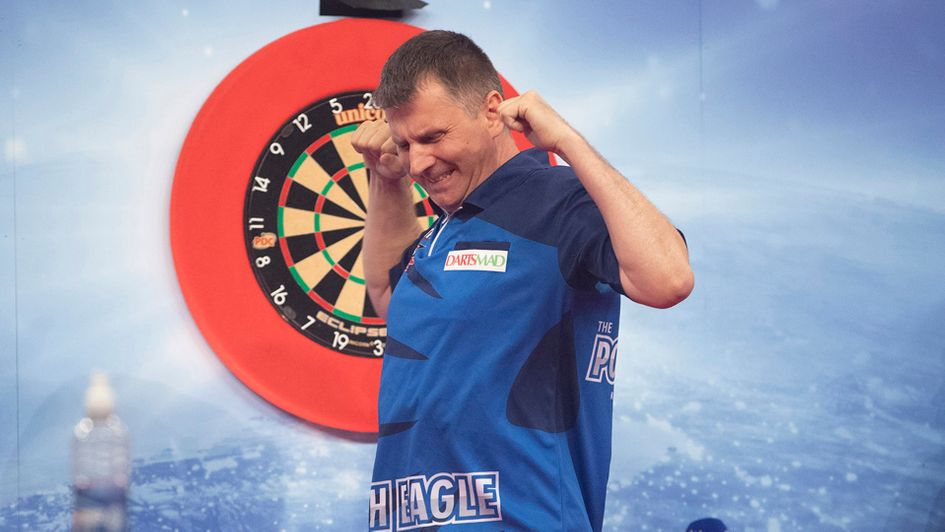 World Matchplay statistics preview: Tips for each quarter of the draw based on stats model

With the World Matchplay starting in Blackpool on Saturday, James Cooper takes an alternative look at the action to unearth some value bets in the quarter markets.

1pt Gerwyn Price to win Quarter One at 7/4 (General)

A skill often overlooked is the ability to put a number next to a player or outcome and while a player rating and or probability cannot be taken as gospel, it stands to reason that a good way to attempt to beat a compiler’s odds line is to act like one and create your own prices. Whether you believe in a maths-based approach or not, it’s a hard task to achieve long-term profits in fairly static markets such as darts deploying feel alone without a reference point, in this case a set of 100% probabilities.

As mentioned in previous articles, in many ways darts is a very good sport to model, primarily due the relatively few variables and outside factors at play, particularly compared to say, horse racing. For a start, it’s head-to-head, played indoors with a pre-determined winning score and the non-contact nature of it really should lend itself to a data approach when assessing the chance of one player against another.

With that in mind, I have looked at all four quarters in the upcoming World Matchplay, breaking down each of them into three rounds. Having priced up all possible permutations using a set of player ratings with a formula tweaked to match length, a probability for each player triumphing in their quarter is produced.

The main disparity in this Quarter is Dirk van Duijvenbode, who is priced up at between 7/1-10/1 with the layers but is nearer 20/1 with me in a mini section containing Welsh superstars Gerwyn Price and Jonny Clayton. The aforementioned World Champion is the best player in the world according to my ratings and the 7/4 available is just about big enough to put him up as a bet in comparison to my 37.6% probability.

While not offered as a wager, the stand out 33/1 about Vincent van der Voort is a shade too big in a mini quarter in which all bar Van den Bergh has something to prove. 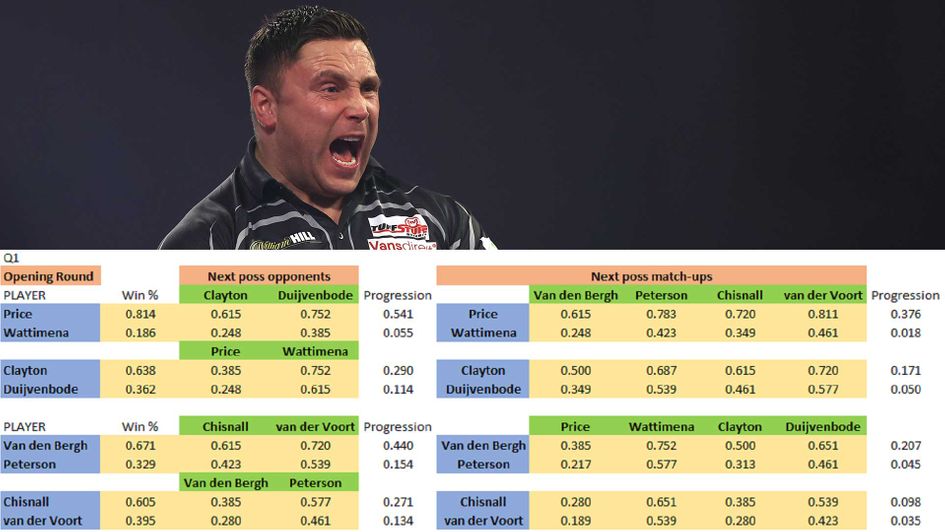 Gerwyn Price is expected to come through the first quarter

The weakest and also the most open section, with James Wade the 7/2 jolly. The current well-being of Glenn Durrant also complicates matters, as while it is possible to pull a player rating down artificially, this approach lends itself to each competitor playing near to their peak and external factors such as Durrant’s well-publicised struggles are largely overlooked. As a result. Callan Rydz’s match price differs greatly with the unsurprisingly-cautious layers and Rydz’s quarter probability is probably slightly higher than 7.4%.

That said, I am still interested in Krzysztof Ratajski at 11/2. The Players Championship series hasn’t exactly been kind to the Pole, but over the past 18 months he has been the second-best player behind Wade in this section. The perennially-underrated Irishman Brendan Dolan is a stiff opening game and he would be a slight underdog were he to face Wade in Round 2, but Ratajski would be clear favourite against anyone in the bottom half of the quarter and should be 9/2 maximum according to my figures. 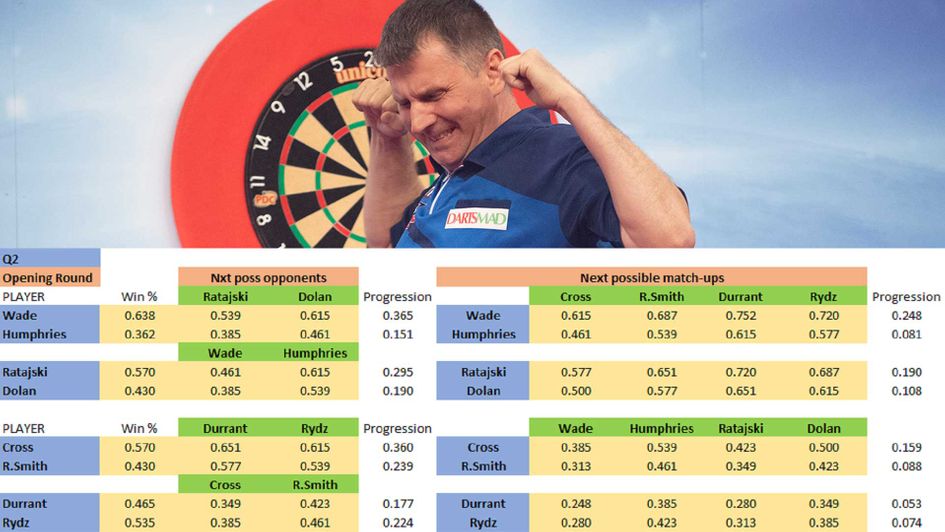 Ratajski is the call in quarter two

In short, with big guns Peter Wright and Jose de Sousa pitched together and both around 9/4 with me, there is no value to be had in this quarter. 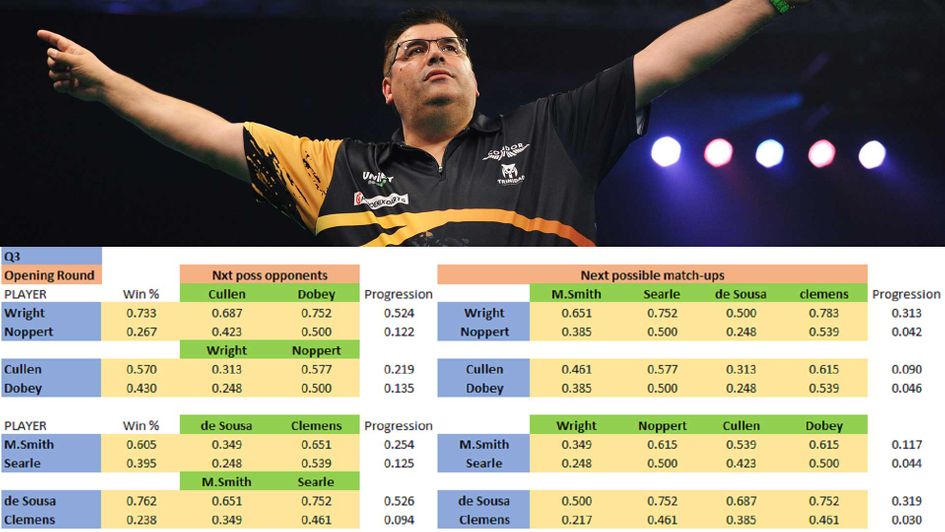 Jose de Sousa is one of the favourites for glory

Michael van Gerwen is no bigger than 11/8 and is 43.7% with me to triumph in the most one-sided Quarter. Gary Anderson looks too short at 5/1 and on balance, MVG’s first-round opponent Damon Heta might be worth a speculative play at 22/1+. He’s around 10/3 with me just to win that opening encounter, but should he catch the Dutchman cold, Heta’s task becomes a very realistic one and with a combined probability of 5.3%, the odds available are acceptable. 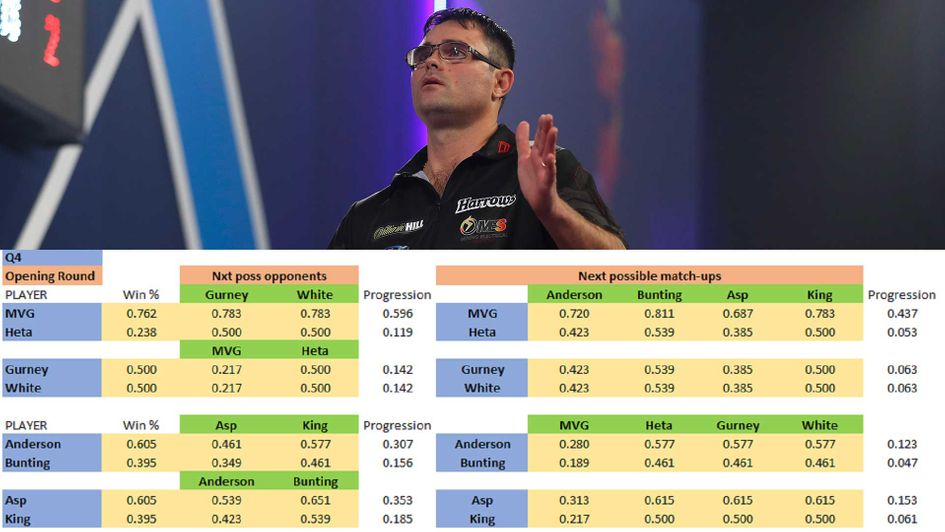