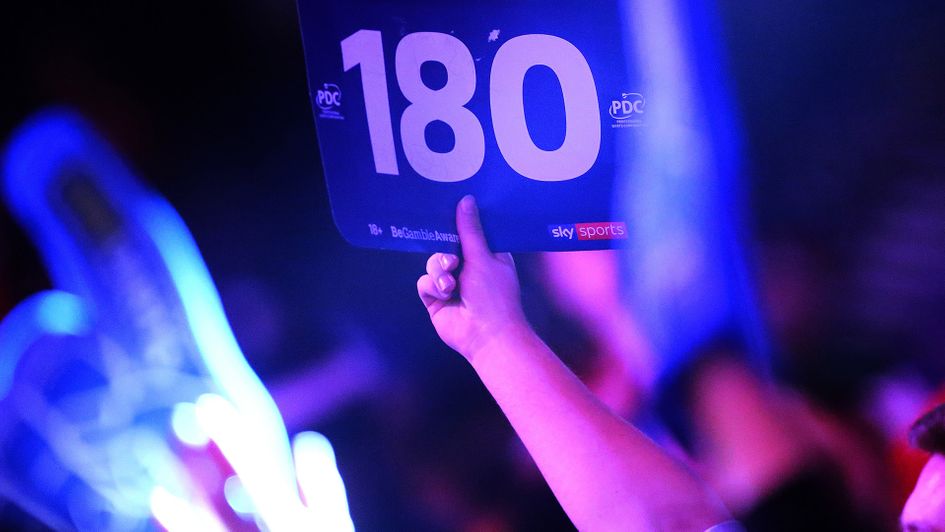 Which players are best at winning with the most 180s and the highest checkouts?

The darts match treble: Which players are the best at winning with the most 180s and highest checkout?

Darts analyst and statistician Carl Fletcher can reveal which darts players are superior at bringing up the popular 'match treble' ahead of this summer's World Matchplay.

The 'Match Treble' bet continues to be one of those bets that appeals to the punter as they can provide excellent returns and are often boosted by certain providers. Spotting the right time to get involved in these bets is key rather than backing them blindly so having the statistics to back up your hunch will certainly help.

Looking at the data from 2021 across all events for the World Matchplay line-up, the top three statistically in this field are Dirk Van Duijvenbode, Michael Smith and Jose De Sousa.

Van Duijvenbode tops the list during the current season and has managed to achieve this feat in 40.58% of the matches he’s played. If you look at the individual statistics behind the bet then there’s no surprise as to the reason why. He boasts a 71% match win percentage, has won the 180 count in 66.67% of his matches and has had the highest checkout in 59.42% of them.

When all the attributes of his game come together the ‘Aubergenius’ is one hell of a player who’s definitely on the up. His seasonal average in 2021 has increased two points from 2020, up to 96.39 from 94.22. Not only is he good for a match treble here and there, he is also a genuine Dark Horse in Blackpool this upcoming week. 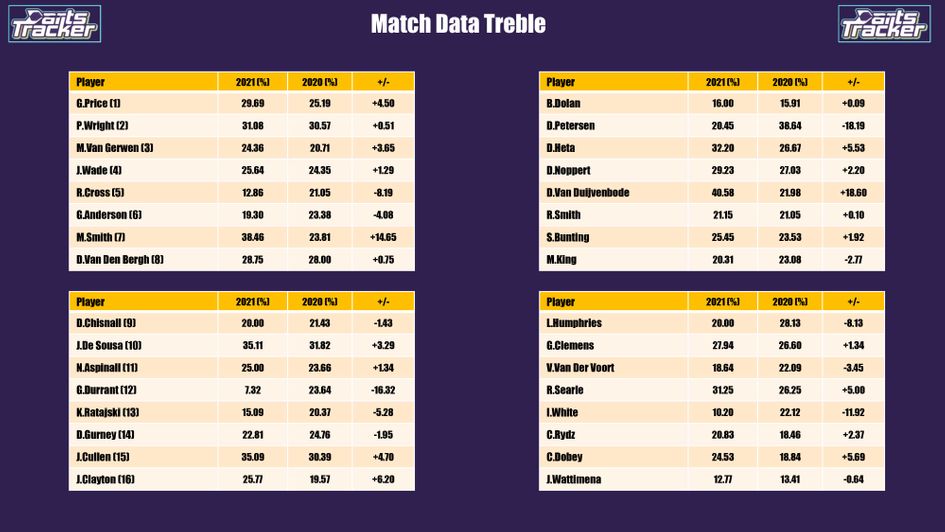 The percentage of how each player have managed the 'match treble'

Next best performer on the Match Treble front in 2021 is ‘Bully Boy’ Michael Smith. One of the most naturally gifted throwers in the game he was overlooked for the Premier League this year after his disastrous first match exit at the World Championships and certainly felt aggrieved judging by the interviews he gave afterwards. He’s having an excellent season this year on the floor though.

He won Players Championship 10, was runner up in the fifth event and has backed this up with a further six quarter final runs too. His match treble percentage this year is 38.46% compared to 23.81% in 2020. This represents the second biggest improvement on last year amongst the 32 players participating the week ahead; only the aforementioned Dirk has shown a bigger improvement over the two years in relation to this statistic.

As already mentioned, the third best in this respect is Jose De Sousa who has managed to register the match treble in 35.11% of the matches he’s played. This should be no shock as he’s the best 180 hitter around at present, averaging 0.38 per leg so far this year. It should also be noted that he was to be respected on the match treble front in 2020 too.

At 31.82% he boasted the second best match treble last year only bettered by Devon Petersen. Nonetheless his percentage has increased this year and with the ammunition he boasts, ‘The Special One’ with a big checkout is more than likely to secure you a successful match treble bet.

Three other players to note in this respect at present are Joe Cullen, Damon Heta and Jonny Clayton. ‘The Rockstar’ boasts the fourth best match treble percentage in 2021 at 35.09% and he was also fourth best of these players in 2020 at 30.39%.

The percentage increase this year is no surprise as he’s already won a couple of Players Championship events so far this year and if he’s overcome a disappointing performance in the most recent Super Series he’s one worth following.

Damon Heta makes up the Top 5 in match treble percentages this year at 32.20%, a figure which increased from 26.67% in 2020. Whilst he didn’t feature in the Top 5 in this field the previous year, he was only just behind them in eighth place and despite a mouth-watering clash with MVG in the first round, he could represent excellent value in that.

Without doubt one of the players of the current year is ‘The Ferret’. The reigning Premier League champion has managed to secure the match treble in 25.77% of his matches in 2021. This figure has increased from 19.57% last year. This 6.2% increase is the third best increase of the players involved in the Matchplay in comparison to last year. It can’t be any surprise however as he seems to be on the up in all aspects of his game. His seasonal average is up to 99.19 (from 95.49) and his match win percentage is 76.29% (from 57.61%). There seems to be no end at all to the rise we are seeing from the Welshman.

Whilst we’ve discussed the best performers and biggest improvers, that’s not been the case for all. The three players who’ve declined the greatest in percentage terms on 2020 match treble figures are Devon Petersen, Glen Durrant and Ian White.

‘The African Warrior’ was the top player in this statistical field last year, claiming the match treble in 38.64% of the matches he played. This year in comparison he’s achieved this in just 20.45% of matches. So what’s the reason for the decline? Well most his statistics are down.

Whilst Devon’s decline has not been unnoticeable to the regular follower of darts it’s not been has highly documented as the loss of form suffered by Glen Durrant. The 2020 Premier League champion has achieved the match treble in just 7.32% of his matches this year, down from 23.64% last year, the second biggest decline of the thirty two players in the Matchplay field. That wouldn’t be a worry in itself to ‘Duzza’ and probably wouldn’t be something he takes too much notice of as he’s never been the biggest 180 hitter but the reason for this is more to do with the fact he’s not winning many matches.

His match win percentage this year is just 37.84% - the lowest in the field – from 55.12% last year. In fact it’s been worse than that of late following a plummet in confidence where he’s won just three of his last twenty five matches, although all these did occur last week. One thing to note with Glen however is despite his lack form he still has the highest percentage in the field for winning legs won courtesy of 100+ checkout at a whopping 18.39%.

Finally the other player mentioned was Ian ‘Diamond’ White who seems to be struggling of late. After a bright start in the opening three Players Championship events, he’s only progressed further than the Last 64 in two of the last seventeen floor events and failed to qualify for any of the opening three planned Euro Tour events at the qualifiers last week.

His match treble percentage in 2021 is just 10.20% down from 22.12% in 2020 and in the events prior to the Matchplay last year it was at 28.30% for the same period. His 180 per leg ratio isn’t too much lower over the two years at 0.25 compared to 0.28. The bigger worry is his match win percentage this year. Glen Durrant aside he’s the only player in the field this year with a less than a 50% record at 48.98%. During 2020 this was 64.42%. Whilst he has a winnable opening round tie versus Daryl Gurney his lack of form wouldn’t have you clambering to back him to win the match let alone the match treble.

A table of all match treble percentages for the players involved in this years World Matchplay is attached to allow you to see those who currently may represent good value, those on the up and those struggling, with last years figures included also. It will certainly be interesting to see who will benefit with the return of a strong crowd presence as it’s been quite some time since the players will have experienced this.

Perhaps we’ll see a resurgence in form from some players, we may even see the nerves get the better of some. One thing for sure is that it promises to be an exciting week at one of the most iconic darting venues and arguably the second biggest event in the darting calendar.