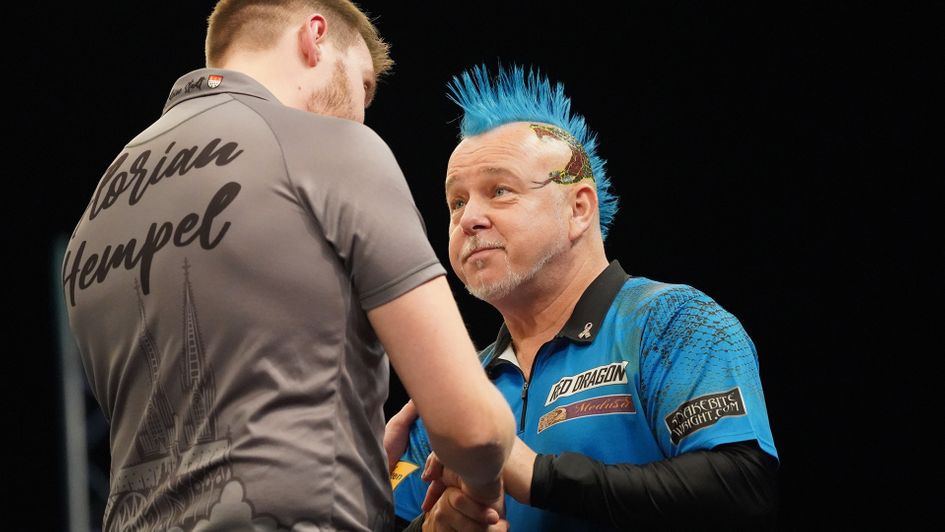 Darts results: Peter Wright crashes out in round one of the European Championship

Peter Wright's defence of the European Championship ended on the opening night as Florian Hempel caused a huge shock with a 6-3 victory in Salzburg.

Snakebite produced a dazzling weekend of darts last year on his way to major glory but not even a mid-match change of darts on this occasion could prevent him falling at the first hurdle.

Making his debut in a televised PDC event, Hempel impressed in a 6-3 defeat of Wright, who also fell at the first hurdle at the World Grand Prix earlier this month.

Hempel took the game to the world number two from the off as he opened up a 3-0 lead, and a clinical 50% checkout from the 31-year-old meant Wright was never allowed a way back into the contest.

"I'm really happy," said Hempel. "He is the number two in the world and to beat him is an amazing feeling.

"To start on TV with a win in my first game is a great start. It's the biggest achievement for me and it will give me so much confidence.

"I want to play my best darts and I will keep trying my best."

We will have a new name on the @CazooUK European Championship this year! pic.twitter.com/SMwCT5R9mJ

Former handball player Hempel will return to the Salzburgarena on Saturday evening to face Suljovic, after the Austrian number one delighted his home crowd with a comfortable 6-2 win over Adam Hunt.

Suljovic, a World Cup runner-up in September, continued his return to form with a dominant display and two ton-plus checkouts to reach the last 16.

"I started good and Adam is a brilliant young player but he didn't play as good as he can tonight, and I played better," said Suljovic, the 2016 European Championship runner-up.

"The first round is very hard every time for me, but in the second round I have nothing to lose and I look forward to playing in front of my home fans again."

Eight first round matches took place on the opening night of the £500,000 tournament, as 2012 champion Simon Whitlock bowed out to impressive debutant William Borland.

Scotland's Borland, 24, revelled in his moment on the big stage, taking out two ton-plus finishes, including a match-winning 142.

"The finish at the end was great and there were some glimpses of my best but I'm just glad to get the win and I can kick on now for Saturday," said Borland.

"I enjoyed it and to beat a player like Simon is special. I've got to take it in my stride because I'm just at the start of my career.

"I'm happy to be here and I want to do my family proud. I'm really enjoying playing against the best in the world and I need to keep going.

"When I was a young kid I dreamed of this, I'm here now and I'm loving it. It's all experience and I'm really happy with how it's going right now."

Borland's next assignment will see him face 2018 semi-finalist Joe Cullen, who showed a ruthless streak in a 6-0 whitewash of Ted Evetts.

One of the games of the night between two of the sport's most exciting prospects saw Luke Humphries edge out Callan Rydz in a last-leg decider.

A tight affair played at a rapid pace saw with Humphries end the stronger of the pair, winning back-to-back legs to recover from 5-4 down.

"I knew it was going to be a very tough game but I'm just happy to get through it," admitted Humphries, March's UK Open runner-up.

"We all know how good Callan is. He's a fantastic player, such a heavy scorer, and he pushed me all the way.

"Overall I think I was the better player more consistently, but we couldn't hold our own throw at times. It was a strange game - I was always under pressure but in the last two legs I was happy to put in a decent performance to get over the line."

Humphries will meet Jose de Sousa in the second round after the Portuguese number one ground out a 6-4 win over 19-year-old Lewy Williams.

Welsh debutant Williams impressed with a 94.51 average, but after he missed six darts for a 3-1 lead, De Sousa took hold of the contest and used his experience to get over the line.

"He started very well but I think after that he started to become a little bit nervous," De Sousa suggested.

"I had to control the game because in the first round it's hard but I did a good job.

"He is a brilliant player but the game is what it is, and it was for me this time.

"Right now I feel much better without glasses. I'm okay, I see well and have no problem so I can play well."

2019 champion Rob Cross enjoyed a hard-fought 6-3 victory over Irish teenage debutant Keane Barry, and he will take on Brendan Dolan in the second round after the Northern Irishman's 6-2 defeat of Kim Huybrechts.