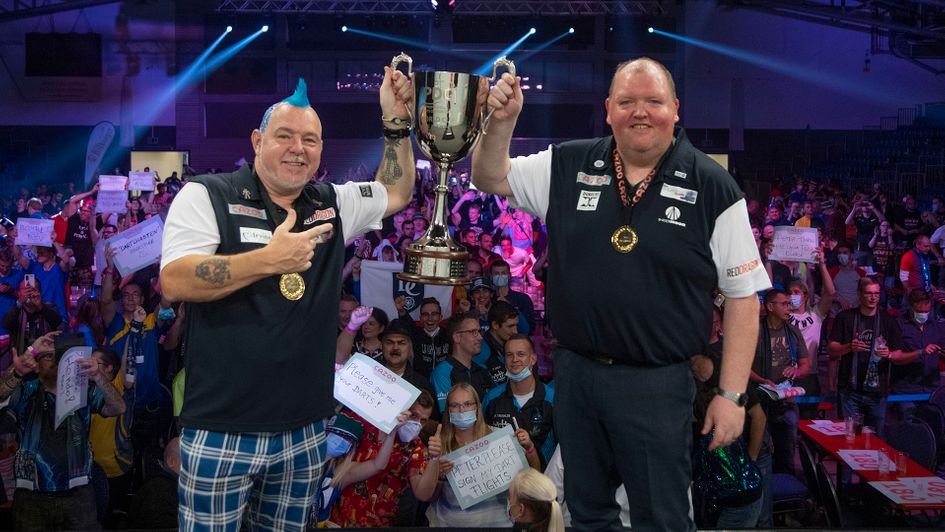 Wright lifts the trophy for the second time in his illustrious having done so with Gary Anderson in 2019 but his incredibly popular team-mate John Henderson is celebrating a maiden PDC title of any kind at the age of 48.

It's no wonder Hendo was in tears as he walked up on stage at the Sparkassen-Arena in Jena after Snakebite's 4-3 victory over Suljovic sealed an unassailable 3-1 lead in the tie and also prevented him from facing the agony of a deciding singles rubber with Rodriguez.

Both men are in tears up on that stage as they are crowned champions and what a moment this is for the Scottish duo 👏 pic.twitter.com/6BxYcJo0Zm

An emotional moment up on that stage as John Henderson wins his first ever TV title and Peter Wright becomes only the second player ever to win the World Cup with two different partners!

That's not to say the Huntly thrower wouldn't have been able to handle the pressure considering he memorably sunk the winning double in both of their pairs deciders against the Netherlands and defending champions Wales earlier on a memorable day for the duo (scroll down for semi-final and quarter-final action).

The Scottish pairing were favourites against Austria, who survived three missed match darts from Northern Ireland's Brendan Dolan in a sudden-death leg of their quarter-final before defeating England's James Wade and Dave Chisnall 2-0 to reach their first-ever World Cup final, but an upset looked on the cards when Suljovic crushed Henderson 4-1 in the opening singles rubber with the help of a stunning 160 checkout.

Wright responded by brushing Rodriguez aside by the same scoreline to leave the tie evenly poised ahead of the doubles rubber, which looked to be going the way of Austria when they stormed into a 3-0 lead.

However, Suljovic and Rodriguez combined to miss five match darts across the next three legs as Scotland forced a decider that they won thanks to Henderson keeping his cool once more on double 10.

With the reverse singles to come, Scotland only needed one more point for glory and it was the former world champion and current World Matchplay king who did it as he defeated Suljovic 4-2, firing in a 156 checkout along the way.

John Henderson with a World Cup and a gold medal is one of the greatest sights in sport, let alone darts pic.twitter.com/lKj5smG2yV

"To go back home as World Cup champions, I'm speechless," admitted Henderson. "To win this means everything - it's my first PDC title and it's been an honour to play with Peter.

"How he kept his nerve in that last game I don't know. It's been a team effort but I think we've been the best side throughout the whole tournament.

"It's a team game but he's a legend. I've got to thank Peter for everything he's done this week and all the advice.

"He has mentored me and I can't thank him enough. He's captained me so well and looked after me this weekend, and I believe his captaincy won this for us."

John Henderson going through the agony and relief of watching Peter Wright winning the World Cup of Darts for Scotland! pic.twitter.com/pAZYPm2Em5

The victory was the biggest of Henderson's career and also secures him a spot in November's Cazoo Grand Slam of Darts.

"It's fantastic for Scotland and I'm going to enjoy this," he said. "Hopefully I can kick-start my own career and this is the start of many things to come."

Former world champion Wright said: "It means so much to me. Every time I play I'm putting everything on the line.

"We had the hardest draw but John helped to carry me through. He stood up proud and hit the doubles to get us into the final.

"It was a privilege to play with him - John's going to take over the world now like Jonny Clayton did after winning it last year."

Suljovic was still delighted after an impressive return to the big stage after missing the World Matchplay through illness. "It's a brilliant feeling," said Suljovic. "I'm so happy I'm back. After three months out I said I would give my best but asked Rowby to help me. I'm so happy to be in the final with my best friend."

Rodriguez is hoping to use the success as a springboard for his career. He said: "Of course if you lose the final you're disappointed, but for me there's happiness to get to the final.

"We didn't expect anything - we were not seeded and we went to the final. If you're in the final you want to be the champion, but unfortunately we didn't.

"I played really good in the semi-final but I didn't play my game in the final. We shouldn't have lost the Doubles game when we were 3-0 up."

John Henderson and Peter Wright have taken Scotland into their fourth World Cup of Darts final as they came through a deciding doubles rubber to defeat defending champions Wales 2-1.

The popular Hendo, who was a late replacement for Gary Anderson before the tournament and is yet to win a PDC title of any kind throughout his career, shocked world number one Gerwyn Price in the opening singles match 4-2 only for Jonny Clayton to reverse the scoreline against Peter Wright.

A hard-fought doubles decider was then all level at 3-3 and although Wales had the advantage of throw, Price's opening visit of 41 handed the initiative to the Scots and it was eventually left to Henderson to take out 46 - with Clayton waiting to come back on 40 - to send his side through to face Austria.

Wright is now bidding to lift the trophy for the second time in his career having done so with Anderson two years ago.

The defending champions Wales are OUT and Scotland are into the World Cup final!

It all came down to a deciding leg in the pairs decider and the Scottish duo deliver! pic.twitter.com/HhrXz4uFCl

Austria won through to their first World Cup final with a sensational 2-0 defeat of England in Sunday's opening semi-final as Mensur Suljovic and Rowby-John Rodriguez rose to the occasion in Jena.

Suljovic opened the tie in brilliant fashion by averaging 109 in a 4-1 victory over James Wade to give Austria the opening Singles point.

Dave Chisnall opened his tie with Rodriguez with a 12-darter, but the former World Youth Championship finalist took out 109, 128 and 86 amongst four straight legs to seal a brilliant victory.

The win moves Austria into their first World Cup final, having never previously won past the quarter-finals, while both players have put themselves in line for a Grand Slam of Darts place in November.

The number one seeds England are OUT!

Incredible performances from both Mensur Suljović and Rowby-John Rodriguez as they steamroll Wade and Chisnall to secure their spot in the final!

Scotland's John Henderson and Peter Wright edged out Netherlands' Michael van Gerwen and Dirk van Duijvenbode in a sudden-death shoot-out to move into the semi-finals.

Van Gerwen had put the four-time winners in front by taking the opening Singles tie 4-1 against Henderson - after Scotland, who had previously seen off China and Poland to reach the final day, opted to switch their order of throw.

Wright then set up the Doubles decider by defeating Van Duijvenbode 4-1, and the Scottish duo opened up a 3-1 lead to move to the brink of the semis.

The Dutch produced back-to-back 14-darters to take the tie to a one-leg decider, with Wright's 140 leaving 64 for Henderson, who landed tops to claim a memorable win.

Scotland are into the semi-finals after coming through a deciding leg victory in the doubles decider and listen to the ROAR!

The Singles ties were shared as Brendan Dolan edged out Suljovic 4-3 before Rodriguez averaged almost 100 as he defeated Gurney 4-2.

The Doubles contest went all the way in a see-saw contest, before Rodriguez initially missed double 16 to claim victory for Austria in the deciding - and sudden-death - leg.

However, Dolan missed three darts at double 12 and six to claim victory for the Northern Irish, and Suljovic returned to land double 16 in a stunning finale.

Wade averaged 101 and hit four doubles from six attempts - including a 130 finish - as he came from a leg down to defeat Clemens 4-1 in their opening tie.

Chisnall then finished four doubles from seven attempts in his 4-0 whitewash of Hopp to keep England on track to claim a fifth World Cup title.

An absolutely dazzling performance from James Wade there who pins the bull for a huge 130 finish and a 4-1 victory over Gabriel Clemens!

Gerwyn Price set the reigning champions on their way with a 4-1 defeat of Whitlock in the opening Singles tie, sealing the win with a 123 checkout.

Heta battled bravely in his bid to force a Doubles decider as his Singles contest with Jonny Clayton went all the way to a seventh leg, but the Welshman finished a brilliant 144 to seal their place in the last four.

Jonny Clayton seals the reigning champions' spot in the semi-finals with a simply sensational 144 finish in the decider!