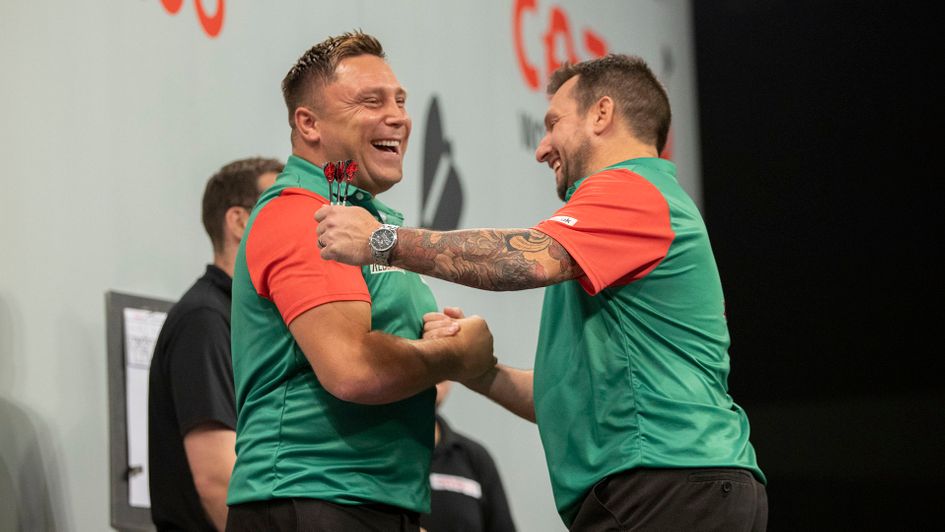 Defending champions Wales had to come through a tense doubles decider to reach the quarter-finals of the Cazoo World Cup of Darts in Jena on Saturday.

Gerwyn Price and Jonny Clayton were pushed all the way by Lithuania's Darius Labanauskas and Mindaugas Barauskas before continuing their bid to retain the title with a 2-1 second round success.

World Champion Price had defeated Barauskas 4-2 in their Singles tie, before Labanauskas overcame Premier League winner Clayton by the same scoreline to force a Doubles contest.

That game went all the way despite Wales going 2-0 up, with Labanauskas finishing double seven, a 116 checkout and 64 to take three of the next four and force a sudden-death leg.

However, Barauskas was unable to finish 96 as Lithuania had the first opportunity to claim victory, and Price landed double four to avoid a huge upset.

World Cup champions Wales sneak through to the quarter-finals after being taken all the way to a deciding leg in the pairs decider by Lithuania! pic.twitter.com/zP5enzNblZ

"I didn't want it to go to the end but I'm glad we came through it," admitted Price. "It was a bit nerve-wracking at the end but you need a little bit of luck to win tournaments.

"I seem to live for those pressure moments; the better someone plays, I seem to pull a little bit extra out of the bag and Jonny does as well.

"We got through the Doubles and it's a team game at the end of the day and if one of slip up, one of us is there to back them up as well.

"Going into tomorrow against Australia I think we both know we need to perform a lot better and I think we will."

Germany's Gabriel Clemens and Max Hopp survived a scare from Japan before coming through a Doubles decider 4-2 to seal their quarter-final place.

The Japanese debutants continued their impressive World Cup campaign as Jun Matsuda pushed Clemens all the way in the opening Singles tie before Yoshihisa Baba whitewashed Hopp 4-0 with the aid of two ton-plus checkouts.

However, Hopp showed his class to bounce back in the Doubles contest, as the German duo punished missed doubles from Japan to progress.

German duo Gabriel Clemens and Max Hopp will face England in the quarter-finals as they come through the doubles decider with a 4-2 success over Japan!

"It was a crazy game," admitted Hopp, who sealed victory with a 108 checkout. "I came good in the end but I'm really sorry for my performance tonight.

"It wasn't the Max I know, but Gabriel played a good first game and we showed some team character there and we are through to the next round.

"It wasn't the performance we expected from both of us. I only had one or two minutes before the Doubles but I had to fight for my country and I needed to put that right.

"We are just glad to be through. I think we both need to rest, forget this night and focus on tomorrow."

Four-time winners Netherlands will face 2019 champions Scotland in a tasty quarter-final tie on Sunday after they overcame Singapore and Poland respectively at the Sparkassen Arena.

Michael van Gerwen and Dirk van Duijvenbode progressed to with a 2-0 defeat of Singapore - although Harith Lim was left to rue a missed opportunity to force a Doubles decider.

Dirk van Duijvenbode defeats Harith Lim in a deciding leg to set up a tantalising quarter-final clash with Scotland!

Four-time World Cup winner Van Gerwen put the Dutch one-up in the tie with a 4-0 defeat of veteran campaigner Paul Lim in the opening Singles contest.

The second match went all the way as Harith Lim and Dirk van Duijvenbode traded finishes of 111 and 106 respectively on their way to a decisive seventh leg.

Van Duijvenbode was initially first to a finish before missing double 18 to give Lim a chance on 83 - but the left-hander missed a single 16 to leave the bull and allowed his opponent to return on double nine to move the Dutch into the last eight.

"Overall we can't complain - when you win 2-0 against Singapore I think it's a good performance," said Van Gerwen.

"It's always nice to win - we know how hard this tournament is and this format always brings more pressure. You have to try to get past it and I think Dirk and myself did quite well.

"I'm looking forward to the next game. I think there's still more in the tank, we both know that, but that's something for tomorrow."

Scotland avoided an upset against Poland as Peter Wright and John Henderson punished missed doubles from Krzysztof Kciuk and Krzysztof Ratajski in a 2-0 victory.

What a time for John Henderson to get his first ever win over Krzysztof Ratajski!

Scotland sail through without the need for a doubles decider!

Wright had to come through a seven-leg contest with Kciuk in the opening Singles tie, with the Polish ace taking out 88 on the bull in the opening leg and holding throw two more times to lead 3-2.

Wright, though, finished 62 to force a deciding leg and pounced when Kciuk was unable to land tops for victory, taking out double 14 to give Scotland the edge.

Poland had moved Ratajski to second in the Singles to take on Henderson, having never lost against the Scot - but the move backfired.

Ratajski missed 12 darts at doubles in the opening two legs as Henderson capitalised, with finishes of 65 and 66 from the Polish ace seeing him pull back to 3-2 only to see the Scot close out the win by taking out 60 on tops.

"We talked tactics about what Poland would do and it backfired," admitted Wright. "Personally I thought Krzysztof Ratajski would have gone up first and I was up for that game.

"I didn't perform well and I had to dig deep to try and get the win, and lucky enough I did. I was trying to take the pressure off John.

"I felt like I let John down in the way I played - I know I won, but hats off to John. He played fantastic and we got a win!"

In the afternoon session, Northern Ireland reached the last eight for the first time in five years as they cruised past Portugal without dropping a leg.

Brendan Dolan set the tone for the game with a clinical 4-0 defeat of Jose Marques, hitting four doubles from seven attempts and averaging over 95.

Daryl Gurney then opened his tie with Jose de Sousa with a 12-darter and averaged 97 as he saw off the reigning Grand Slam of Darts champion to seal Northern Ireland's spot in the final day of action.

They're through to the quarter-finals for the first time since 2016! pic.twitter.com/4lijmxTVFh

Carl Gabriel capitalised on a slow start from Wade to win the opening leg of their Singles tie, but legs of 13 and 14 darts put the UK Open champion in command before he sealed a 4-1 win.

Dave Chisnall then sealed England's quarter-final spot with a 4-2 defeat of Devon Petersen, claiming a key break of throw in leg four to move 3-1 up before closing out the victory.

Dave Chisnall gets the job done against Devon Petersen to avoid a doubles decider.

England are through to the quarter-finals! pic.twitter.com/xpPKr3Ri5L

Australia reached the quarter-finals for the eighth time in 11 World Cups by overcoming a spirited challenge from the United States of America.

World Cup ever-present Simon Whitlock looked set to cruise past Danny Lauby when legs of 11 and 13 darts helped him into a 3-0 lead - wiring double 18 for a nine-darter in leg two.

Lauby, though, responded with a 14-darter and then took out 170 for a 12-darter before levelling the tie at three-all, but Whitlock was too strong in the decider to claim a 4-3 win.

So close to a perfect leg from Simon Whitlock who wires D18 for the nine!

The Wizard wins the leg to break throw and lead 2-0. pic.twitter.com/CL7UXz8oKm

Chuck Puleo then won the opening leg against Damon Heta, who hit back to lead 3-1 before recovering from missing three match darts in leg five to close out a 4-2 success and secure the tie.

Rowby-John Rodriguez pulls off a huge win over Dimitri Van den Bergh to send Austria through to the quarter-finals.

Belgium have reached at least the last eight in every year since 2012, but saw Austria secure a spot in their fifth quarter-final in six years with a 2-0 success.

Rodriguez then showed his quality with a 4-2 defeat of Van den Bergh, punishing 11 missed doubles from the 2020 World Matchplay winner as he came from a leg down to ensure Austria's spot against Northern Ireland on Sunday afternoon.