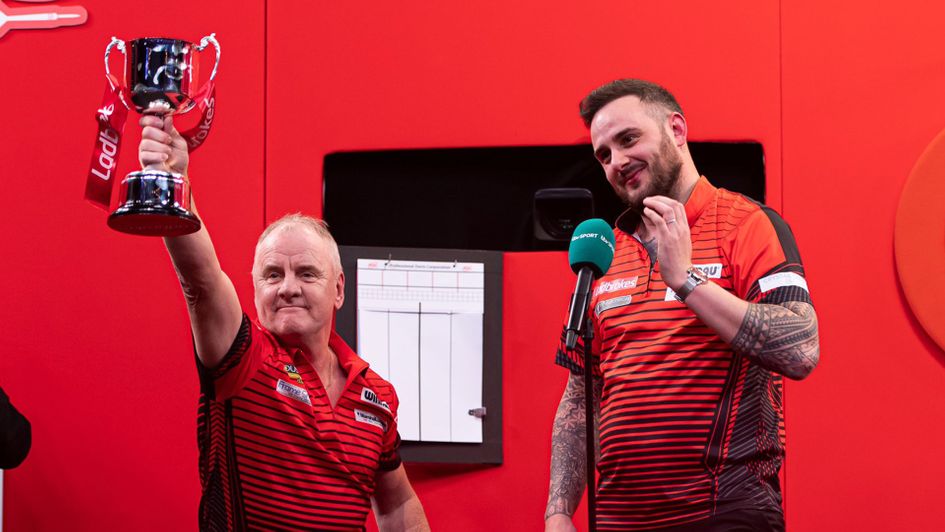 Joe Cullen has finally realised his rich potential on the big TV stage by winning his maiden major final at the Ladbrokes Masters, as Dave Chisnall’s quest to end his long drought ended in more heartache.

The talented Rockstar, who has been tipped for major glory for several years despite only twice previously going past the quarter-finals of a televised event, produced superb darts all weekend to defeat Daryl Gurney (6-2), Gary Anderson (10-1), Michael van Gerwen (10-7) and Jose de Sousa (11-8) before completing his career breakthrough with an 11-9 triumph at the Marshall Arena.

Jonny Clayton’s maiden major victory in the traditional season-opener 12 months ago proved to be a life-changing launchpad for his career and Cullen too will be hoping it can be a catalyst for the brightest of futures.

The 32-year-old was in firm control for much of the contest and also bossed the statistics with a superior 97 average compared to his opponent's 90 but he did miss 10 match darts, including four in the 18th leg and six in the 19th, before finally getting over the line in the next before an emotional celebration with his father in the crowd.

Cullen, whose mother died in October, held back the tears and let his father lift the trophy before saying: "It's amazing to win this and have my dad here by the side of me. Everyone knows what I've been through, I lost my mum in October, it's gut wrenching.

"I've dreamed of this moment for a long time. I felt like I was going to win it at the start of the day, so to actually get over the line feels amazing.

"It's bitter-sweet. I'd love my mum to have been here to see me do it but life's not always fair. I miss my mum dearly so that's definitely for her. It was special to have my dad here. Losing a parent is always tough, so to have my dad by my side supporting me is great."

Love how Joe Cullen celebrates his maiden major title with his dad. Great moment after a breakthrough moment for the Rockstar pic.twitter.com/STn8is202G

The Bradford man pockets a cheque for £60,000 but the most lucrative prize was his inclusion in this year's Premier League line-up.

"It's a foot on the ladder and it's something that a lot of players higher ranked than me haven't done, so it can only be a positive going forward," he added.

"Hopefully this is the first of many. I've proved I can do it on TV and it's even more pleasing because I played well. My finishing all weekend has been pretty good but you can't practice for the moment you have a dart to win a TV title.

"I felt comfortable for the whole game and then all of a sudden I thought I was going to win and that's when it all goes to pieces, as you saw.

"The double 18 at the end was more a relief. I got over the line and that's all that matters."

As well as boasting the higher average, he also hit seven of the 12 180s in an absorbing match while he was also more clinical on the outer ring in spite of those 10 missed title darts. He hit 11 of his other 17 to finish with a checkout percentage of 40.7% as Chizzy missed 16 of his 25 (36%) while he also weighed in with two big finishes of 126 and 117.

🏆 Joe Cullen is a major champion with a thrilling 11-9 victory over Dave Chisnall!

👏 The Rockstar missed 10 match darts before finally getting over the line and this could be the start of a trophy-laden careerpic.twitter.com/qGQqPTUThb

As for fellow crowd favourite Chisnall, he now has to lick his wounds after suffering a ninth televised final defeat, including seven that can be considered majors.

It's been nine years since the St Helens man, who also lost the BDO World Championship to Martin Adams back in 2010, reached his first PDC final, where he was drubbed 6-0 by Phil Taylor in the 2013 World Grand Prix.

Chizzy then suffered a further defeat to Taylor in the 2014 Grand Slam of Darts before Michael van Gerwen beat him in the 2016 Masters, 2016 Players Championship Finals and 2019 World Grand Prix, while the Dutchman also denied him in two televised World Series events in Perth (2016) and Shanghai (2017).

But while the battle scars may have contributed to his latest demise in Milton Keynes, Cullen made sure he broke his duck at his first attempt and will now expect to bag plenty more titles in the coming years.

"Joe deserved to win that," admitted Chisnall. "It just wasn't there tonight - I didn't play that well but he let me in and I took my chances.

"The crowd were brilliant and I'll be back - I'll keep trying to win my first major and get the big trophy."

The moment Joe Cullen has always dreamt of...

He lifts that trophy aloft as he is crowned the 2022 Ladbrokes Masters CHAMPION! pic.twitter.com/PyAaeU1L9M

Dave Chisnall is one victory away from ending his wait for a first major TV title after stunning defending champion Jonny Clayton at the season-opening Ladbrokes Masters.

Chizzy, who has lost all eight of his televised finals including five PDC majors dating back to 2013 as well as the BDO World Championship in 2010, was a significant underdog against last season's Players' Player of the Season but despite averaging slightly less with 97.45 compared to Clayton's 98.43, he ran out a fairly comfortably 11-6 winner.

It looked as though it would be a tight contest when the duo were level at five legs apiece but the Ferret's wheels came off after the interval and Chisnall took full advantage with a clinical display of doubling.

A classy 117 checkout opened up a 7-5 lead before extending his streak to five legs on the trot at 10-5 and although Clayton pulled one back, it was far too little too late.

Chizzy pinned 50% of his doubles and also hit five of the eight 180s in the match while Clayton missed seven of his 13 attempts.

The defending champion is OUT! ❌

The St Helens thrower will now meet Joe Cullen, who reached his first ever televised final with an 11-8 victory over Jose de Sousa.

Fresh from defeating Michael van Gerwen in the quarter-finals, the Rockstar produced a superb performance before eventually holding his nerve after initially missing five match darts, including two in the 18th leg when leading 10-7.

De Sousa couldn't apply any pressure in the 19th leg as Cullen eventually pinned double 16 at the third attempt with his opponent way back on 197.

The Bradford man, who had previously reached two major semi-finals at the 2018 and 2021 European Championship, averaged 101.62 compared to De Sousa's 96.54 and hit seven of the 15 180s in the match - although his finishing of 34.4% may need to be improved upon against Chisnall.

Who will be crowned Masters champion?! pic.twitter.com/y3ecRvRqxK

Joe Cullen kept alive his hopes of a maiden TV title - and potentially a Premier League spot - after defeating Michael van Gerwen in the quarter-finals of the Masters.

The Rockstar wasn't near the same standard that saw him average 106 in a 10-1 thrashing of Gary Anderson on Friday night, but he produced just enough quality to see off the five-time champion 10-7 in front of a thrilled Milton Keynes crowd.

Should he go on to win the title tonight, he could well find himself drafted into the Premier League Darts line-up alongside seven other unnamed stars.

As for Van Gerwen, his worrying major drought goes into a 14th month having last landed a big TV crowd at the Players Championship Finals in November 2020.

Cullen will next meet Jose de Sousa, who battled past Simon Whitlock 10-9 in a hard-fought contest.

Last year's Premier League runner-up, who may need a title run himself to keep his place in the 2022 edition, averaged 96.2, hit five 180's and pinned 63% of his doubles.

The defending champion, who enjoyed a career-changing 2021 on the back of winning this event 12 months ago, averaged 104.19 and pinned 10 of his 15 attempts at doubles (66.7%) as he denied his fellow Welshman the chance of another TV title.

Clayton trailed 3-0 early on before getting on the board with a 106 checkout while another fine finish from 100 at 4-1 kick-started a comeback which eventually saw him move into a 6-5 advantage.

Reigning Masters champion Jonny Clayton comes out on top in the all-Welsh clash with Gerwyn Price, averaging 104 on his way to a 10-8 victory!

Clayton will next face Dave Chisnall, who upset the odds to defeat World Championship runner-up Michael Smith 10-8 in the opening quarter-final.

Chizzy, whose Ally Pally dream was thwarted by Covid, averaged 97.5, hit seven of the 14 180s in the match and fired in four 100+ checkouts as he kept alive his own hopes of landing his first major TV title.

Smith won three legs in a row to move into a 4-3 lead but after levelling up at four apiece, Chisnall took out 153 to break throw while a stunning bull, 25, bull finish of 125 saw him go 6-5 up.

From that point he kept his nose in front to claim an impressive victory, averaging 97.47 compared to 99.33, although he did miss match darts to get the job done one leg earlier.

THAT IS REMARKABLE FROM CHIZZY!

A showpiece 125 finish gives Chisnall a 6-5 lead in this brilliant quarter-final! pic.twitter.com/80I6PY94gO