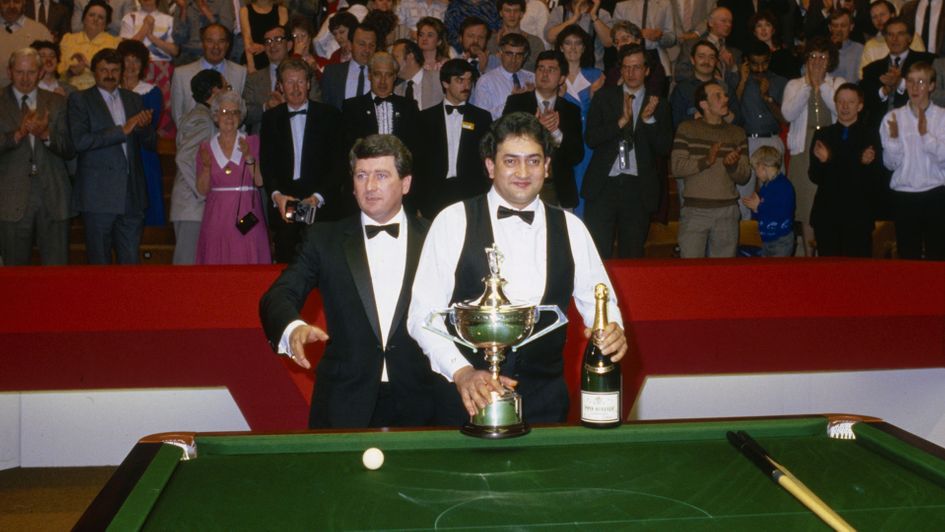 Snooker writer Nick Metcalfe goes back to 1986 for his favourite Crucible memory.

The World Championship has thrown up some extraordinary shocks in the four decades it has taken up residence at the Crucible.

Think Tony Knowles thrashing champion Steve Davis 10-1 in 1982. Or Davis at the age of 52 seeing off John Higgins in 2010. Michael Wasley beating Ding Junhui in 2014. Ronnie O'Sullivan falling at the first hurdle against an amateur, James Cahill, in 2019.

But for my money, none of those surprises have been quite as remarkable as Joe Johnson storming to victory over Davis in the 1986 final. It took the breath away then, and its power hasn't diminished in the years since.

Johnson was a decent player, of course he was. The 33-year-old former gas board worker had already enjoyed a superb amateur career. He had made a tournament final. He was in the top 16. But even given all that, he still achieved something truly spectacular in 1986, with almost nobody willing to back him against Davis, the dominant player of the era.

Bradford man Johnson had played at the Crucible twice before, but had been knocked out both times in the first round. He was rated a 150/1 chance by bookmakers to win the 1986 tournament, and that felt about right.

Johnson beat Dave Martin and Mike Hallett comfortably in his first two matches, but it looked like his race was run when he fell 12-9 behind to Terry Griffiths in the last eight. Johnson produced a glorious late rally in that match to win 13-12 however, and he then thrashed Knowles 16-8 in the semi-finals.

This was already beyond his wildest dreams, but surely taking on Davis would be a step too far. The three-time Crucible champion had enjoyed another excellent season, including victories in the Grand Prix and UK Championship. He disposed of Jimmy White and Cliff Thorburn in the last eight and four respectively in Sheffield, and was determined to reclaim the world crown he had lost in such dramatic circumstances to Dennis Taylor twelve months earlier.

We were getting to know a bit more about Johnson by this time. Mainly his singing. Johnson performed in a band called Made In Japan, and the BBC went to film him in action. He was quite the showman. There was also his strange choice in multi-coloured shoes - pink wasn't a colour usually seen too often at the Crucible.

Johnson was clearly personable and down to earth, and the public warmed to him. Plus, being British, most people in the country naturally wanted Davis to lose in every match he played. We've always had a weird relationship with winners.

Johnson was backed in the arena by an army of vociferous fans. Davis made an ominous start however, compiling back-to-back centuries to move 3-1 ahead. But Johnson refused to back down from the attacking approach that had served him so well in the tournament to this point - one thing that sticks in my mind was his tremendous potting into the middle pockets - and he claimed the final three frames of the session to edge 4-3 ahead.

Then came possibly the most crucial moment of the final, with Davis starting like an express train in the second session and winning four successive frames to move 7-4 in front. Johnson could have let his head go down at that stage, but this Yorkshireman was made of strong stuff. The interval came at the ideal time for him, and after it he battled back to claim four frames in a row himself. Davis took the last of the day to draw level. Eight frames each. The final wasn't going to script at all.

And when Johnson came out firing the next day, we really had an incredible developing story on our hands. He won the first four frames on that Monday afternoon to take a 12-8 lead, with the aid of a crucial fluked red in the 18th frame - Johnson would later admit that he enjoyed the run of the balls in the final. Sports fanatics across the country started to take notice in their droves now. Like all the great Crucible tales, this went far beyond snooker.

Davis dug deep like the champion he is, but vitally Johnson edged the session and took a 13-11 lead into the final evening. He was five frames away from a sensational triumph.

Millions of viewers switched their television sets to BBC Two for what was sure to be, either way, a memorable night of sport. Still, Johnson refused to retreat into his shell on that final evening. His adventurous approach paid off, as he claimed three of the first four frames to extend his advantage to 16-12. Plenty of pundits and fans felt Davis could win from that position though. Remember, this was not just the world's best snooker player, but one of the most feared competitors in all of British sport.

Both players had their chances in the 29th frame, but Johnson took it. One frame away from glory. And it soon became a victory lap when Johnson strutted round the table in the next frame, knocking balls in for fun from 27-22 behind.

By now, the crowd was roaring in approval. Every ball disappearing meant the title getting ever closer. He rolled home the final red to get himself over the finishing line. When fans who watched in 1986 think back to this final, it's more than likely they'll see the last few shots in Johnson's clinching break of 64 in their mind. Nearly every one of them was brilliant. Think buckets, not pockets. Johnson was shaking his head in disbelief, smiling.

"The crowd here at the Crucible are going mad for Bradford's Joe Johnson. The most remarkable world final I've ever seen," the voice of snooker, "Whispering" Ted Lowe, said in the commentary box.

The fans weren't piping down at all by the time the BBC's man for all seasons, David Vine, grabbed the microphone. "They'll never stop, Joe. Joe Johnson, from Bradford. Snooker champion of the world."

The sporting Johnson paid tribute to Davis, calling him a "perfect gentleman" and "great ambassador for snooker". He also directly addressed Davis, saying: "I hope that we can still be friends."

Davis raised his glass with a kind of half smile. He was hugely disappointed, of course, but this wasn't the desolate Davis of 1985. He simply acknowledged he had been blitzed off the table.

"We can't go on meeting like this, David," he said. "I got absolutely buried in this final, so no complaints, and Joe is a worthy champion."

This was boom time for snooker, and Johnson was front page news as well as back. He became a star overnight. He appeared on Wogan, the BBC's regular evening chat show hosted by everyone's favourite genial Irishman, Terry. Imagine that now. It would be like Judd Trump sitting on the sofa to talk with Graham Norton or Jonathan Ross. It just isn't happening, is it? Johnson also met Princess Diana, and was invited to Wimbledon to sit in a box with Cliff Richard. Make no mistake, becoming world snooker champion then was a major deal.

It was hardly surprising that Johnson never hit those heights again in the rest of his career. He did reach the world final twelve months later, again playing Davis. But that time the favourite won, 18-14.

Johnson did also win a couple of tournaments, the 1987 Scottish Masters and 1989 Norwich Union Grand Prix, but his career was on the wane in the nineties, and he largely struggled to make an impact at the highest level. Johnson eventually retired in 2005, and now spends his years talking about the sport for Eurosport, as well as coaching youngsters.

My formative years were full of Crucible magic moments - Cliff Thorburn's 147, Davis edging out the luckless White 18-16, the black ball final. But I think the Johnson win is my favourite memory from growing up. Little wonder I fell in love with the tournament. I'm still besotted with those 17 days in Sheffield now.

There will be seismic shocks in the years to come at the Crucible. But they'll have to go some to match the spring of 1986. Joe Johnson, king of the world. Even now, it still takes a bit of believing.