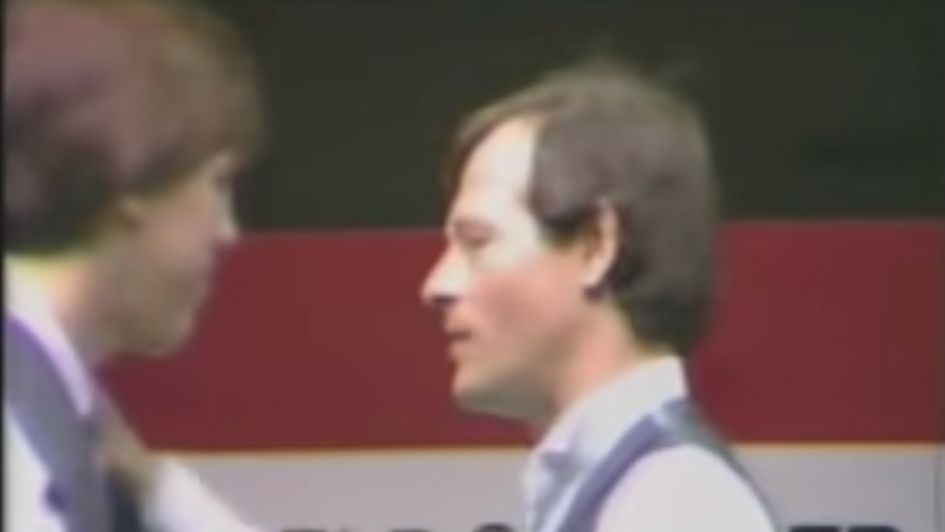 Neal Foulds and Alex Higgins in 1984

Former World Championship semi-finalist Neal Foulds takes us back to 1984 when he made his Crucible Theatre debut against a certain Alex Higgins.

My best World Championship memory would have to be my first appearance at the Crucible Theatre in 1984.

The first time I actually visited the Crucible was in 1979 when a group of us went up to watch John Virgo. It was the year Terry Griffiths won the event as a qualifier and it was a special thing for me to experience the venue for the very first time. I was only 15-years-old at the time and was sitting in the front row of the Crucible watching John who enjoyed a terrific run that year and eventually made the semi-finals.

Anyone who hasn't yet been to watch snooker at the Crucible really needs to go - it's just the most amazing venue but it can break a player if you don't take to it. It really isn't suited to snooker and shouldn't work but the intimacy of the venue does make it work and the atmosphere in there is something special.

It can really effect some players, particularly on their first experience of the Crucible, as it takes time to adapt to the venue, and I think going in 1979 as a young boy and getting used to the place really helped me when it came to making my playing debut there in 1984.

It was my first season as a professional and having won three qualifiers to book my place at the Crucible, I drew Alex Higgins in the first round.

It was obviously a big deal for me and I remember the day before my match I went into the venue with my Dad to try and get used to the place.

Nobody thought I could be beat Higgins, and the pressure was off me in a sense, but I played well and led overnight having won the last three frames of the first session.

The next day you could just tell that all the attention was now on our match. The TV cameras were on our table and there was a real buzz about the place in anticipation of a possible early shock.

Alex came back at me in that second session and pulled it back to 7-7 before I managed to get over the line. I won 10-9 in the end and it was just good to get the job done. It was a great feeling.

I remember the media interviews after the match and the strangest thing is looking back on it all now - you can actually watch the interview on YouTube and it's just surreal to think about those days and how much has changed since. The world really is a funny place.

I lost to Doug Mountjoy in the second round having led early in that match but the 1984 World Championship is the forgotten championship in many ways because of what happened the following year.

Jimmy White should have won it in 1984. He ended up losing 18-16 to Steve Davis in the final but Jimmy played wonderfully well throughout the event and the title should have been his that year.

It got to a point where he kept meeting Steve and Steven Hendry in their prime and couldn't quite get over the line but 1984 is the one where I've always felt he should have won.