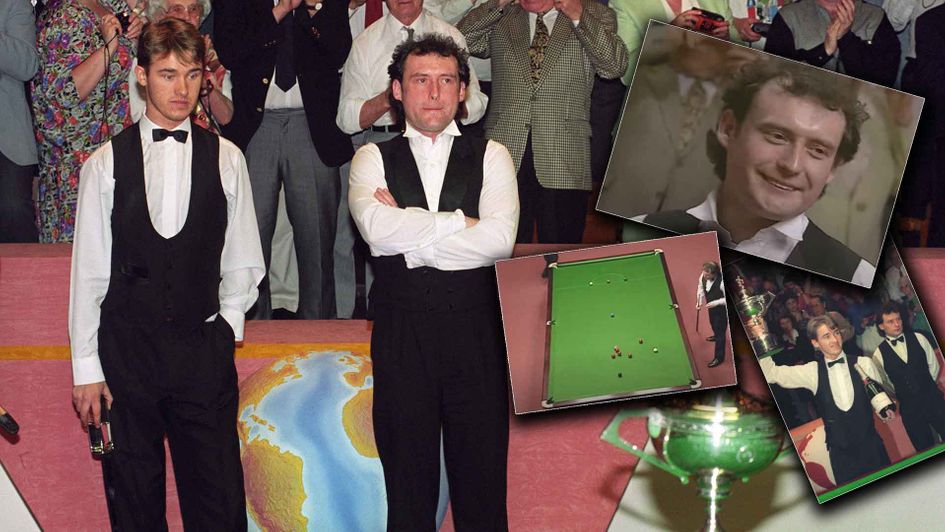 Stephen Hendry became a seven-time world champion in the 1990s but it was his victim in four of those finals, Jimmy White, who would become immortalised as a People's Champion. Our Chris Hammer reflects on a rivalry that gripped the nation.

Crucible heartache for the People's Champion

I have an unsubstantiated theory that the player - or team - who happens to steal your heart during childhood unwittingly has a huge influence on your lifelong attitudes towards sport and competition, either as a fan or a participant.

For millions of impressionable kids growing up in the 1990s, success would become the norm if they'd been pressured by family traditions to support Manchester United, for example, and anything less seen as failure. Siding with the underdog or a gallant loser in the future were never options, and there'd certainly be no sympathy for those who were. Survival of the fittest and all that.

They’d probably play every game they were losing – from Subbuteo to Monopoly – for an extra 10 minutes just to turn it around.

And it’s the same for all sports. Fall in love with the champion early on in life and the die is cast for your future expectations of a hero.

However, in the same decade, there was a completely different kind of champion who stood so much taller than anyone else in defeat, regardless of how exasperated and forlorn he looked with every passing year.

He was the People’s Champion.

Swashbuckling on the table and a real character off it, Jimmy White had already won the hearts of millions of snooker fans long before my grandma introduced me to this great hypnotic game in the very early 1990s.

Her love, Steve Davis, had already won his last Crucible crown and we now found ourselves at the start of an era of a young Scotsman that she would always call ‘Stephen Henry’ until her dying day, no matter how high I turned up the volume.

Although it’s a tired cliché to say snooker was blessed with characters in the glorious 'good old days', there’s no denying how the predictable – albeit brilliant – nature of Hendry’s dominance during those times made him the accidental villain in contradiction to White’s cavalier and intense quest to fulfil his dream.

The Whirlwind couldn’t have worn his heart on the sleeves of his shirt more obviously if he tried and perhaps it was these emotions as well as having the burden of equally desperate supporters to please that became his Achilles heel in four World Championship finals against an ice cool Hendry, who was free of battle scars.

By the 1992 edition, I’d now become an avid snooker fan, with more than a little help from watching Big Break and playing Jimmy White's 'Whirlwind' Snooker, and so was firmly transfixed to the Crucible drama for the first time as White iconically conjured up the tournament’s second ever maximum break against Tony Drago.

Around two weeks later he found himself in the final yet again, only this time he stood on the cusp of glory at 14-8 up, having fired in breaks of 134 and 128 along the way.

This was surely the lovable Londoner's year at long last, the floodgates would open and the People’s Champion tag would merely compliment the greatest of tangible honours.

But no. Somehow. Heartbreakingly somehow, Hendry reeled off an astonishing 10 frames in succession, including three centuries and a 134 of his own, to leave White and his army of supporters around the world absolutely shell-shocked.

My lasting memory of that particular presentation is David Vine coming out onto the Crucible floor for what he’d often term ‘pay day’ or ‘wages time’ and presenting a crestfallen White with a cheques of £90,000 for being runner-up, £100,000 for his 147 break and another, consequently, of £14,000 for the highest break of the tournament. Hendry received just one for £150,000.

A year later, White’s daring flair would see him saunter into his fifth final but mental blocks would descend against his nemesis from the get-go and he was demolished 18-5 with the embarrassment of a session to spare.

That could have easily been the final nail in the coffin of his dream but in fittingly brave fashion for such a genuine 'nearly man', he showed tremendous character to bounce back in 1994 to go the distance for a fifth successive year.

Sadly, nobody had been able to do White’s dirty work for him earlier in the tournament, so here was Hendry standing in his way yet again.

With all the years of storyline and psychological torment behind this rivalry, another two days of gripping snooker became intoxicating but also impossible to watch without pacing around the room.

In fact, just to try and release some nervous tension I’d have to make frequent trips to the garden to give my largely disinterested parents score updates and unload my anxieties about the unthinkable – yet highly likely – outcome happening once more.

“Surely he’ll just let him win this time, mum? Why doesn’t he just let him win?” I naively asked as I continued to struggle with the concept of why anyone would want to leave the same opponent distraught over, and over again.

From 5-1 down and facing another hiding, he fought back to lead 13-12 only for Hendry to regain control by reeling off three frames on the trot.

The Whirlwind breathed a late lease of life into the final with a break of 116 before taking two of the next three to level matters at 16-16. Who could bare to watch?

Hendry edged ahead and one away from victory but White took the 34th to ensure the climax of the World Championship would go the distance for the first time since the Black Ball final of 1985.

Now if you thought Steve Davis went the palest shade of ashen when gifting Dennis Taylor glory on that unforgettable night, it was nothing compared to White’s look of horror when he agonisingly missed a black off the spot when leading 37-24 with the remaining reds nicely positioned.

And that was curtains.

Bow tie off and top button released, White was lifted by the customary Crucible roar on his short walk to David Vine for the joint post-match interview he would certainly have done anything to get out of right then. But there was no hole to swallow him up.

The awkwardness between the finalists couldn’t have been more apparent, until Vine attempted to play the humour card by wishing White a Happy Birthday.

Just another reason why Jimmy White is the ultimate People's Champion. pic.twitter.com/6sIuYs1EZd

"He’s beginning to annoy me," the Whirlwind famously quipped with a smile as he looked warmly at his adversary.

White would never get another visit to the table in a Crucible final, but for the fifth successive year, the magnanimous way he accepted defeat further cemented his crown as a People’s Champion.

So if Jimmy White was one of your first sporting heroes then I’m sure, like me, you’ve chosen to spend many years of emotional turmoil chasing unfulfilled dreams of the underdog and seeking solace and pride in the inevitable disappointments.

After all, if Jimmy can laugh about it, so can we all.