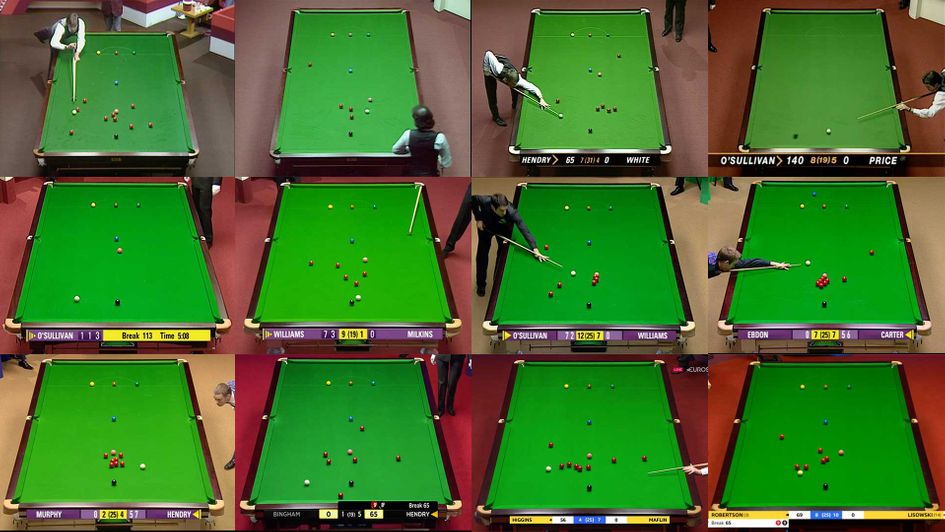 Scroll down to watch the 147 breaks in multiscreen

There have been 12 maximum breaks in World Championship history, including three each from Ronnie O'Sullivan and Stephen Hendry. Relive them all here.

Of the 176 maximum breaks in professional snooker history, 'only' 12 have occurred on the hallowed baize of the Crucible tables, with just eight different players achieving the feat across four decades.

Cliff Thorburn famously entered the record books by grinding his way to the iconic first World Championship 147 - and second ever in any tournament behind Steve Davis' frame of perfection at the 1982 Lada Classic - but it would be a nine-year wait before the next when Jimmy White thrilled the crowd en route to his third of six finals.

Since then Stephen Hendry (1995, 2009, 2012) and Ronnie O'Sullivan (1997, 2003, 2008) have bagged three apiece, including the Rocket's mesmerising clearance in just five minute and eight seconds in 1997 which is not only the quickest of all time, by some distance, but almost unanimously regarded as the greatest.

It's now been a quarter of century since the iconic moment that catapulted a 21-year-old O'Sullivan to stardom beyond the realms of snooker and, unlike so many other sporting prodigies that promise so much, he's never stopped breaking new boundaries and records in the most breathtaking of styles.

'That' maximum remains as unfathomable now as it was back then and arguably the most unbreakable record in sport. While few players would even have the audacity to attempt it on the practice table - let alone in the pressure cooker of the Crucible - he somehow potted those 36 balls with a prize fund of £147,000 on the line.

So we've finally got a 147 on the 25th anniversary year of Ronnie O'Sullivan's record maximum.

Obviously not a race but here's how all the Crucible 147s - now including Neil Robertson - looked after 5 minutes and 8 seconds. pic.twitter.com/RRRHGHVbVa

Interestingly, the closest anyone has ever got to breaking the 'impossible' record in any event is O'Sullivan himself during the 2003 World Championship when clocking a time of 6:30 against Marco Fu.

Here's every 147 in Crucible history, and you'll notice only three of them came in defeat, including the most recent by Higgins against Kurt Maflin in 2020.

Not content with becoming the first world champion outside the United Kingdom in the modern era, the Crucible king of 1980 brought the crowd to their feet - not to mention the millions glued to their TV sets - with another history-making feat in the fourth frame of a match he was leading 2-1. It may have been the polar opposite to how Ronnie O'Sullivan managed it 15 years later - and started with a huge slice of luck as you'll see from the video below - but as Cliff Thorburn ground his way to perfection against Terry Griffiths, play on the other table was halted, allowing fellow Canadian Bill Werbeniuk to peep his head round the screen during the closing stages. As the Grinder leant over for the final black, commentator Jack Karnehm whispered: "Oh good luck, mate!". Thorburn would later have fortune on his side to sneak through 13-12 during a final session that lasted more than seven hours and finished at 3.51am - still the latest finish in Crucible history. Or earliest, depending on how you look at it. The Canadian legend then kept ardent snooker fans awake until 2.12am when defeating Kirk Stevens by the same scoreline in the quarter-finals, and then came through another final-frame decider to beat Tony Knowles 16-15 in the semi-finals! Steve Davis had played 14 hours less in reaching the final and his superior mental energy was clearly a difference with the title on the line, running out an 18-6 winner.

Jimmy White was already a People's Champion by the time he was attempting to reach his fourth Crucible final and his third in a row back in 1992 but the way he conjured up this maximum against Tony Drago further enhanced that status. The noise that greeted this achievement could only have been surpassed had he managed to win any of his six finals.

You'd have thought Jimmy White had already suffered enough punishment at the hands of Stephen Hendry by the time they locked horns in the 1995 semi-finals. This, of course, was 12 months after that agonising 18-17 defeat and the fourth time he'd lost to the Scotsman in his six Crucible finals. White was always gracious in defeat no matter how he felt inside and was again quick to give Hendry a warm smile and handshake after he sunk a tricky final black from a tight angle that moved him 8-4 ahead in a match he'd win 16-12. Two days later he'd be celebrating his fifth Crucible crown.

Ronnie O'Sullivan soared to superstar status in five minutes and eight seconds of breathtaking snooker from the gods at a time when he'd won just two of his record 19 Triple Crown titles. The Rocket, who was just 21 and four years away from his first of five Crucible crowns, compiled his break during a 10-6 first-round victory over Mick Price and it won him a whopping £147,000. It was clocked at five minutes 20 seconds at the time but in recent years it's been correctly altered to 5:08, which averages out at roughly 8.5 seconds per shot. To put that into perspective, that's over a minute quicker than the next fastest by O'Sullivan in 2003.

Ronnie O'Sullivan came relatively close to breaking his record of the fastest ever 147 when clearing the table in six minutes and 30 seconds, which is easily the second quickest of all time. It came during the first session of his first-round match to Marco Fu, when trailing 4-2, but it couldn't prevent him suffering a 10-4 defeat the following day.

Mark Williams became the first Welshman to join the elite maximum club during a 10-1 demolition job over Robert Milkins, although he'd get knocked out in the very next round. This effort also goes into the history books for being the first 147 to seal a victory at the Crucible and the second to win a match anywhere. The first was Stephen Hendry's in the 1997 Charity Challenge Final against Ronnie O'Sullivan - which remains the only one to clinch a title - and there has been 19 since.

Ronnie O'Sullivan became the first person to record a third Crucible maximum in 2008 although at that time nobody else had managed more than one! It was the second time a maximum had completed a Crucible victory - with his opponent Mark Williams being the first to do so three years earlier of course - and also the second time a 147 has been scored by a player who goes on to win that same World Championship.

Ali Carter's first competitive 147 break was also the first time there had been two maximum breaks in a single tournament, let alone at the same World Championship. The Captain achieved the feat just a day after Ronnie O'Sullivan's effort against Mark Williams while his opponent Peter Ebdon had incredibly come agonisingly close in the previous frame by missing the 15th black! Carter's maximum, which he celebrated wildly, helped him move 8-7 up in a match he'd win 13-9 on his way to his maiden final, which he'd lose to O'Sullivan.

Stephen Hendry's second Crucible maximum helped him surge into a 5-2 lead over Shaun Murphy during the first session of their quarter-finals but he was unable to go on and keep alive his quest for a first world title of the Millennium, losing 13-11.

Stephen Hendry's 147 at the 2009 World Championship

A quite incredible career ended at the 2012 World Championship but not before one final crowd-pleasing moment of greatness. The seven-time champion, who still remains at the top of the all-time list of most Crucible crowns, produced an array of stunning shots during his perfect break, particularly in the latter stages amidst an atmosphere of high tension. He'd later bow out in the quarter-finals and subsequently announce his retirement with immediate but there's only one thing his last appearance here will be remembered for.

John Higgins ended an eight-year stretch without a Crucible maximum by making his first, against Norway's Kurt Maflin. As maximums go, it was straightforward stuff, the balls apparently well-set from an early stage. Still, Higgins' composure was the difference after Maflin himself had missed out on a similar chance in round one, and the 14th red, to middle, was a delight. With colours on their spots the job was all but done and Higgins held his nerve for a famous addition to his list of extraordinary World Championship achievements. He'd later lose a thrilling match 13-11, which is just the third time a 147 has been in vain.

Neil Robertson fired the 12th 147 break in World Snooker Championship history in the 19th frame of his second round match against Jack Lisowski. The Australian punched the air after pulling off the feat, which will net him a share of the £15,000 break prize with Graeme Dott, who scored a 147 in qualifying, as well as £40,000 for achieving it in the tournament’s final stages. Play briefly stopped on the other table as Anthony McGill and Judd Trump crossed the divide to congratulate Robertson, who pulled level with Lisowski at 10-10 at the mid-session interval.