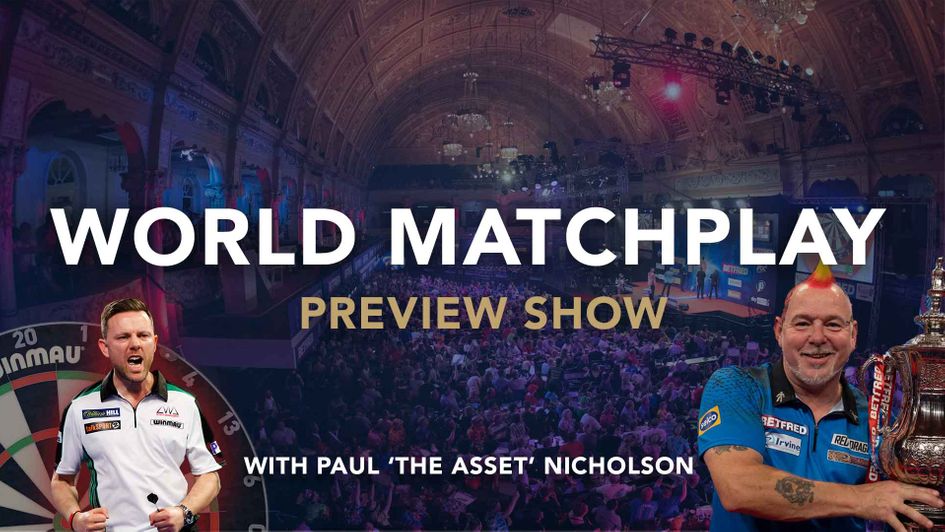 Scroll down to watch the World Matchplay preview show

The Asset, who made the draw for the PDC after Monday's Players Championship event in Barnsley, also attempted to predict who would reach the final and lift the Phil Taylor Trophy using statistics and his expert insight.

You can watch the preview show, which is packed full of statistical graphics for all 32 players, below...

Predicting the 2022 World Matchplay - the second biggest major in darts!

Paul says: "It's a difficult section for Peter Wright after a strange old year so far. He's had health issues and hasn't played at the same kind of standard that we've seen from him in previous seasons. However, during the recent Players Championship events, his form has been good enough to worry everyone in this quarter.

"Krzysztof Ratajski is always dangerous but he's not quite at the level he was last year and if Peter reaches the quarter-finals then he'll probably come up against either Jonny Clayton or Dimitri Van den Bergh but I still fancy him to progress. He has more experience of Blackpool and knowing what it takes to get the job done here, and that is always an advantage.

"Jonny won't fear anyone because he was consistently beating the best players in the Premier League this season to finish top - but this is a very different format and longer matches. You need experience of that under the lights of the Winter Gardens otherwise you can easily get found out."

Chris says: "I think Jonny Clayton will progress. Surprisingly he hasn't won a title of any kind this season and the first final he reached was Monday's Players Championship event in Barnsley, losing to Brendan Dolan, but statistically his season average of 97.27 is in the top five out of everyone while he also comfortably topped the Premier League regular season table due to his relentless consistency. He hasn't got a great record in Blackpool but this is really only his second appearance since becoming a regular major winning player." 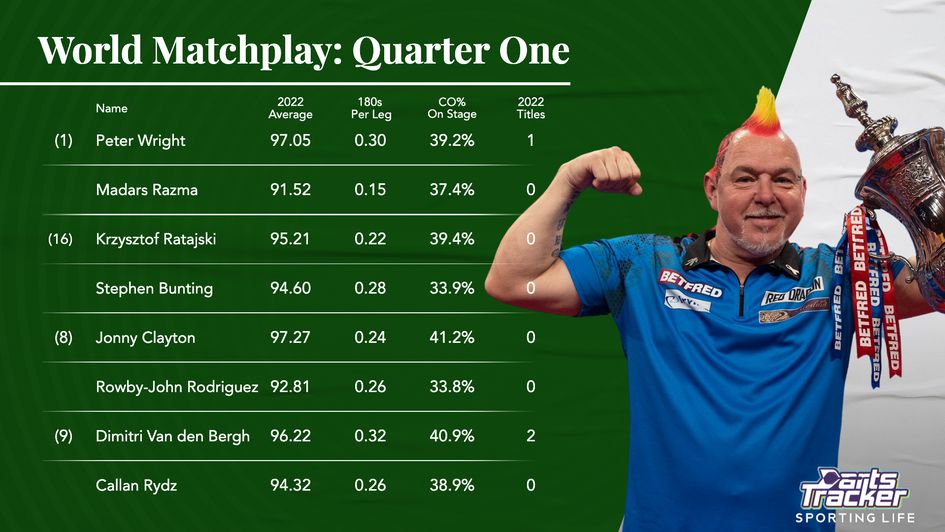 Paul says: "Toss some balls in the air and see what falls - that's how you predict who is coming through this quarter! Michael van Gerwen v Adrian Lewis is the tie of the round but I feel sorry for Martin Lukeman making his debut in this quarter.

"MVG has won most titles this year with six but Luke Humphries has picked up five which is incredible when you think he hadn't won a senior title until February. He's been winning in front of big crowds on the European Tour which stands him in good stead and I fancy him to rise to the occasion and come through this quarter. If he beats Nathan Aspinall then he'll be battle hardened and won't fear anyone.

"Whoever comes through this quarter will probably feel favourite and I'd expect them to reach the final."

Chris says: "If you look at the stats you'll see that six of these players have won 18 titles combined this season! My tip in the last quarter - Jonny Clayton - launched his career by winning the World Cup and I think the same could happen to Damon Heta after he recently did the same with Simon Whitlock. It gave him a major-winning feeling while statistically his average of 97.99 this season is second only to Michael van Gerwen." 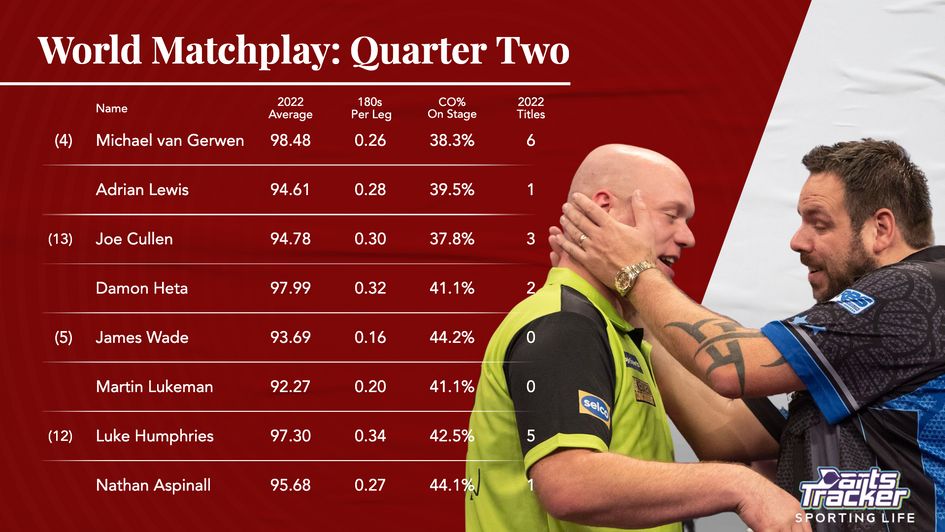 Paul says: "There's a lot of frailty in this section, including Gerwyn Price.

"A lot of his good stuff in 2022 came early in the season when he won two titles and hit a pair of nine-darters on that blockbuster Premier League night in Belfast. Since then he hasn't done much and even took a few tournaments off in the build up to this major.

"Jose de Sousa is the seventh seed but isn't playing very well by his high standards so I think the biggest threat could be Dave Chisnall. Over the last month he's started to figure some things out about his game, the big averages are coming back and so are the 180s."

Chris says: "Gerwyn Price's average is two points lower than at this stage of 2021 so there's obviously something not quite right since those great couple of months at the start of the season when he went nine-dart crazy. He did average a personal best 117 against Martin Schindler in the World Cup and although that was only first to four legs, if he can get going with this kind of performance early on, that could give him the belief he needs. It's fair to say this is the weaker quarter based on statistics and Price can take advantage. However, the dangerous Schindler could be good value at 20/1 if he gets past a rusty Price because the draw will open up." 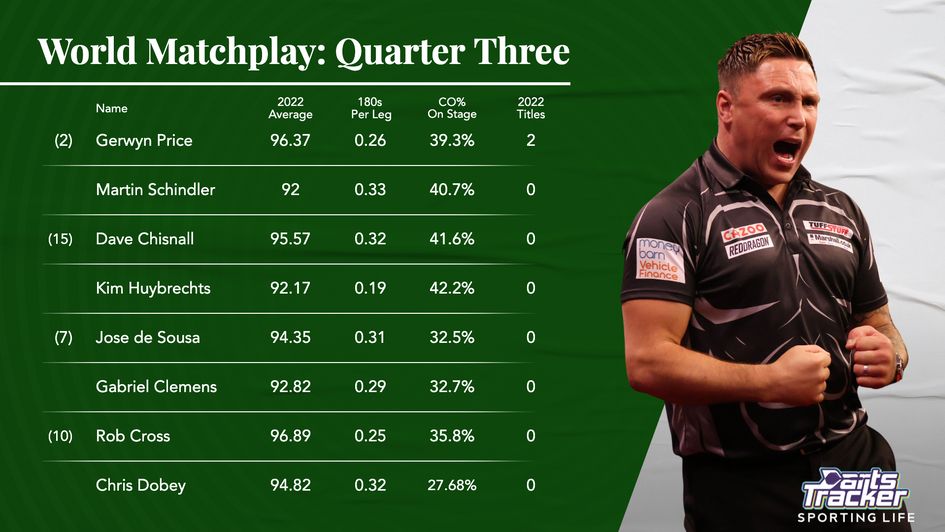 Paul says: "Michael Smith is a worthy favourite but Andrew Gilding will be dangerous having posted a personal best average of 118 in a Players Championship event recently. It wasn't a flash in the pan because over the past two months, he's been playing really well on the stage and floor while he also came perilously close to a Players Championship title in the last week.

"Nobody wants to play this guy and it's a bad draw for Michael Smith. That said I still think he'll come through it. He couldn't be closer to winning a major and his recent US Masters success at Madison Square Garden shows he has what it takes. Michael also has the Blackpool factor in his favour having been to the World Matchplay final before - even though he gifted Rob Cross an 8-0 lead before eventually making a match of it. He's learned a lot since then and gets out of the blocks much quicker."

Chris says: "I fancy Michael to come through this. He's won five titles this season and that last Premier League season night which really helped him confidence. He's got over that UK Open final defeat in style but we do need to see him win a major, that's the only piece that's missing in his career. I must draw your attention to a potential second-round meeting with Dirk van Duijvenbode, who has been hitting 180s for fun this season. If that happens, back Smith to win and Dirk to hit most maximums because you should get a decent price." 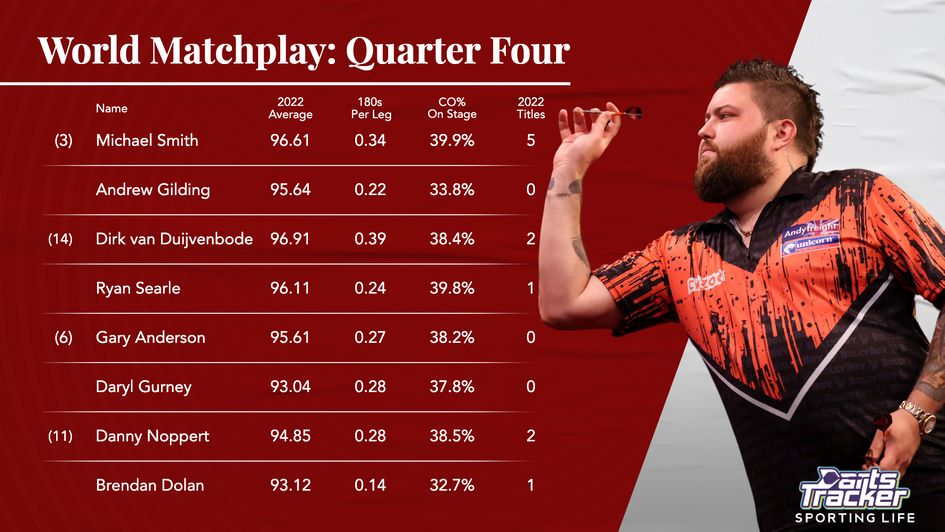 Who will make the final and win the title?

Paul says: "I think Michael Smith will beat Dave Chisnall in what would be a perfect semi-final for Blackpool given it's a north-west derby. I then think Luke Humphries will overcome the top seed Peter Wright in the other semi-final.

"As far as predicting a winner is concerned, I'm going for Michael Smith." 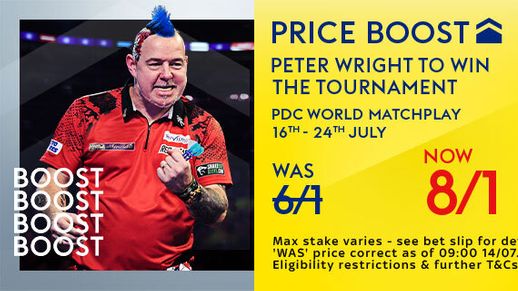 Chris says: "I'm backing Jonny Clayton to beat Damon Heta in the first semi-final based on his experience of knowing how to do it on the big occasion and I think Michael Smith to overcome Gerwyn Price in the other.

"The romantic in me wants Smith to win his first major title but Clayton's lack of nerves and past major success will be crucial. 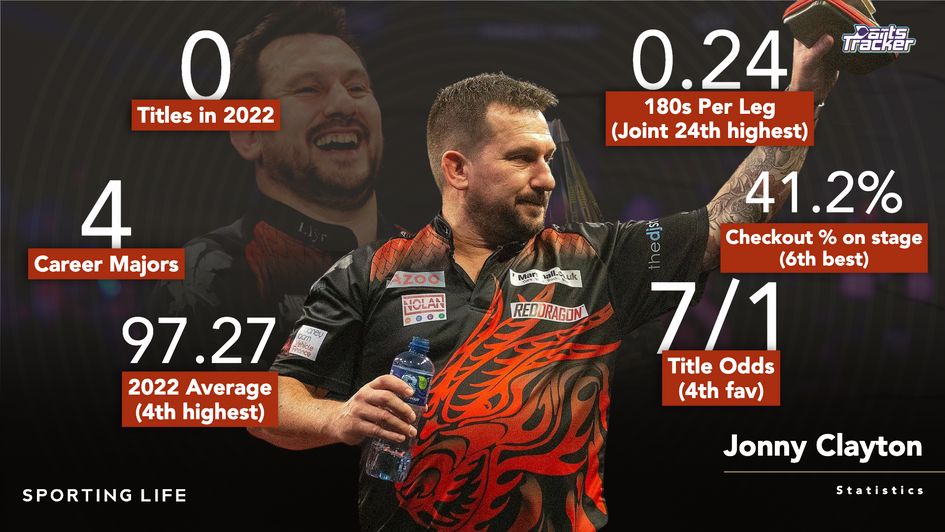 Jonny Clayton's statistics ahead of the World Matchplay 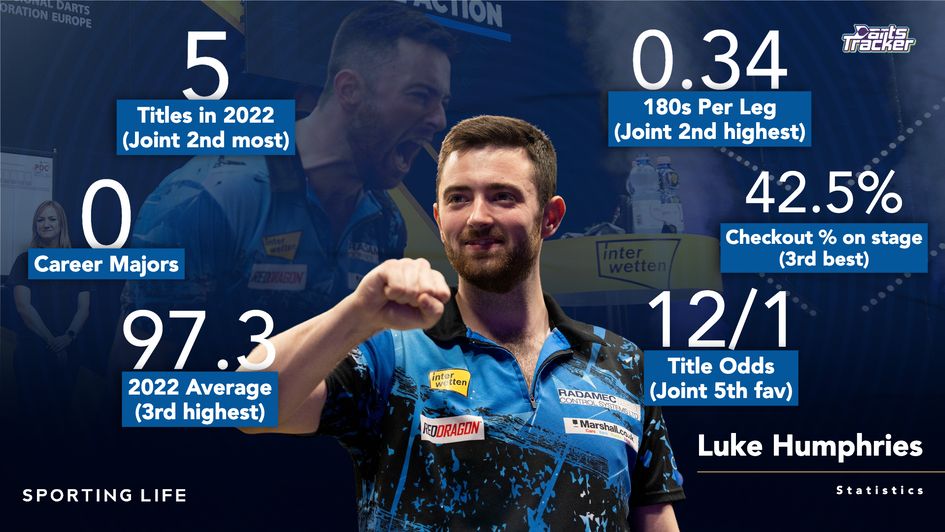 Luke Humphries' statistics ahead of the World Matchplay 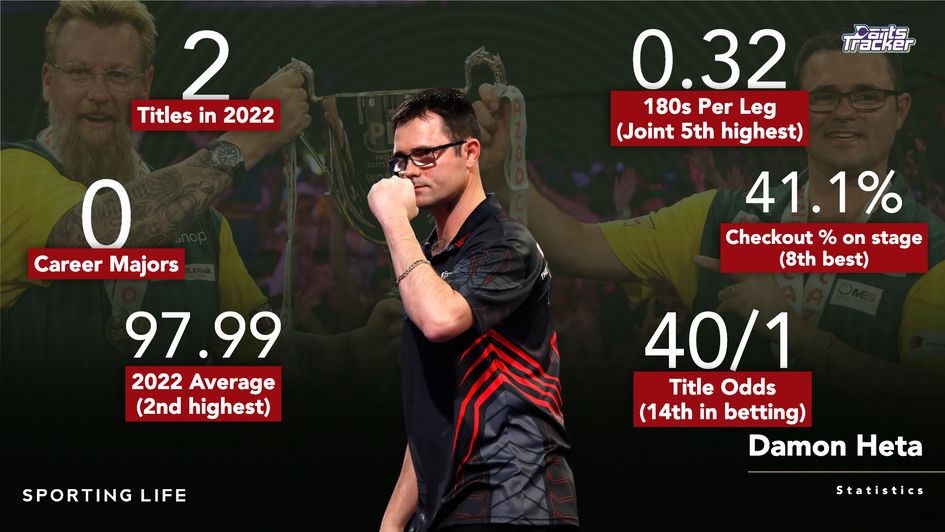 Damon Heta's statistics ahead of the World Matchplay 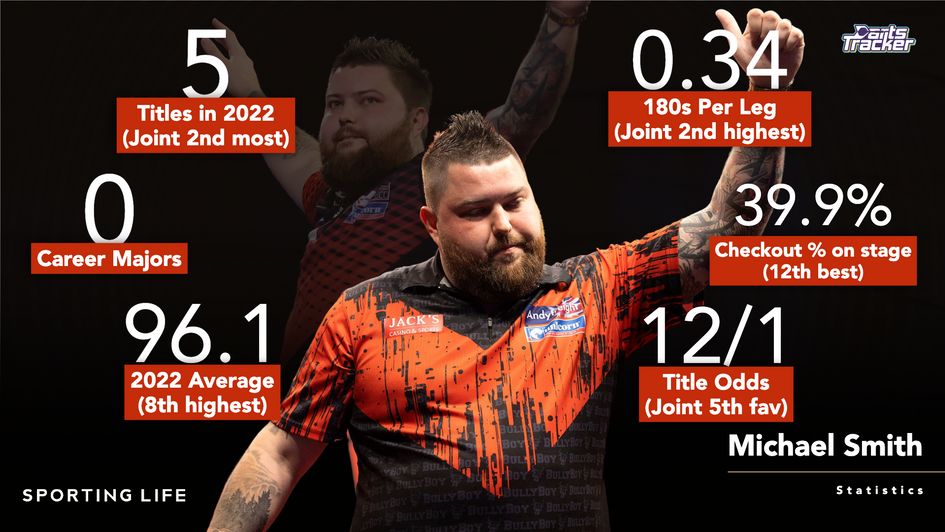 Michael Smith's statistics ahead of the World Matchplay