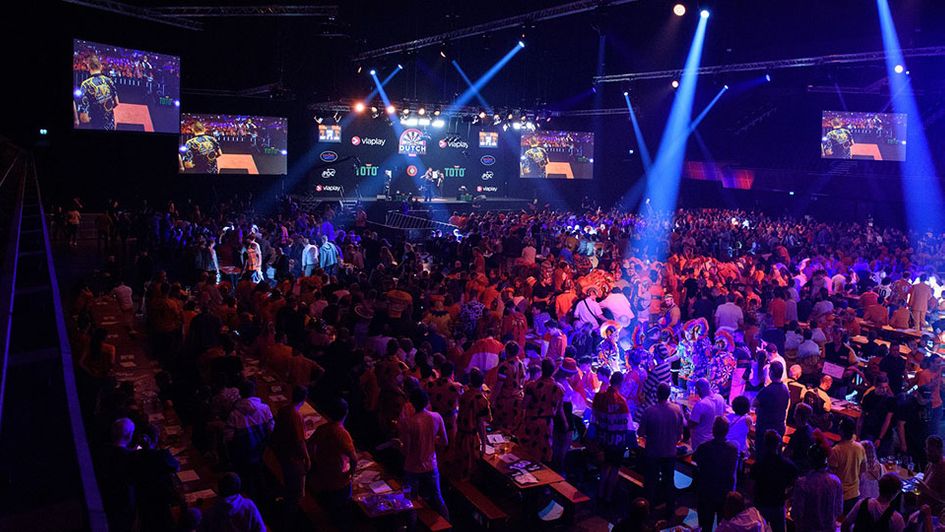 The Dutch Darts Masters was another unranked event in the Netherlands (Picture: Kelly Deckers/PDC)

Are there too many unranked darts tournaments and is the calendar making players too tired to compete at their best?

This weekend's Dutch Darts Masters was the sixth unranked darts tournament of the season and fifth since the start of June, including the finale of the Premier League campaign that began back in February.

Although there's big money for those involved to compete for, there are concerns over whether the top players are getting fatigued and are effectively prioritising events that do nothing for their rankings.

The World Series does put more darts on our TV screens but are there too many of these events in such a short space of time on the calendar, which is already congested by European Tour and Pro Tour action?

Paul Nicholson discusses these issues in his latest column and has some solutions...

Although we have a lot of ranked events for players with Tour Cards, there is an increasing amount of unranked tournaments swelling the calendar for those towards the very top of the game and it’s causing them dilemmas in regards to their priorities.

Michael van Gerwen called the Premier League the second most important event of the year and it’s obviously not ranked – does this sit well with everyone? No, it doesn’t. We know it has huge global importance for the future of this sport from a broadcasting perspective but should it be deemed more prestigious than the other big ranked majors away from the World Championship?

The World Series events are also a useful way of branching the game out to other parts of the globe and ticket sales will always be a crucial money maker for the PDC but at the same time, there are so many of them and they take up lots of weekends when other players are itching to get involved in ranked action.

Since the start of June we’ve seen the Premier League conclude along with World Series events in Copenhagen, New York, Amsterdam and the World Cup in Germany so it’s no surprise that the top players have looked jaded at times throughout what has been a very long season for them already.

Earlier in the year, we did see performance levels drop from the Premier League players – not only on the Thursday nights but also during weekend action on the European Tour or the Players Championships and it got to the point where some of them opted to cherry pick the events they played in.

We will see this strategy used more and more – just like in sports such as tennis and golf - where the star players will have to prioritise certain types of events to stay fresh and energetic enough for the ones they really want to target.

Players selected in the World Series get appearance fees on top of the prize money they win and although that has no impact on their rankings, none of them will ever turn those invitations down. This is particularly problematic for Fallon Sherrock who is featuring in World Series events that clash with Women’s Series events and this could hamper her chances of qualifying for the World Championship.

If you talk to Dimitri Van den Bergh, Michael Smith and even Damon Heta about this, they will all admit these events are not majors. It’ll still feel a big moment for them – winning on a big stage against the game’s great players in front of a global televised audience – but they are essentially “invitationals.”

I don’t think anyone classes these events as majors just because they are televised. To be a major, an event has to be accessible to all Tour Card holders in terms of the qualification process. On that topic, the Masters still isn’t classed as a major even though the criteria for selection is being ranked in the world’s top 24 so from that perspective I think it should be one.

Raymond van Barneveld won the Grand Slam of Darts when it was unranked and then demanded it should be. He was right, and now it’s one of the biggest ranking events on the calendar.

As long as everyone knows what you need to do in order to qualify, then it should be a major.

At the moment there are three World Series events Down Under in August and that works perfectly because there are no ranking tournaments taking place during this time. The problems arise when you put all these European based ones in at a hectic time in the calendar when the Premier League, European Tour and Players Championship events are also filling up weekends.

The first six months of the year is way too cluttered with ranked, unranked and major action so there’s got to be a better way of spreading it out more.

There are 13 European Tour events during a calendar year and you could argue they have been crunched together too tightly at times such as when there was an event for five weekends in a row. Maybe that was too much for certain players to manage alongside other darting commitments.

Plus, there were Players Championship events in the middle of weeks to ensure they all got played.

There were cases where a player would go to a European Tour event, then two Players Championships, then to the Premier League and then another European Tour event in just one week! Think of the travelling and the impact on your family life – not to mention darts performance.

We need more constructive breaks, but it’s a matter of opinion as to whether that’s up to the player or the promoter.

My other suggestion would be spreading events across Europe a bit more if that’s at all possible. At the moment the Netherlands have a World Series event and the World Series Finals on top of their European Tour event and the Rotterdam Premier League. It’s too much for a small country and three of those are unranked!

If you want to spread the game with unranked action then don’t put three of them in one country!

Places like Poland, Sweden and Italy would be great places to host one…and what about Ireland? Irish crowds are as good as anywhere in the world and they’ll certainly snap up the tickets and create a memorable atmosphere as always.