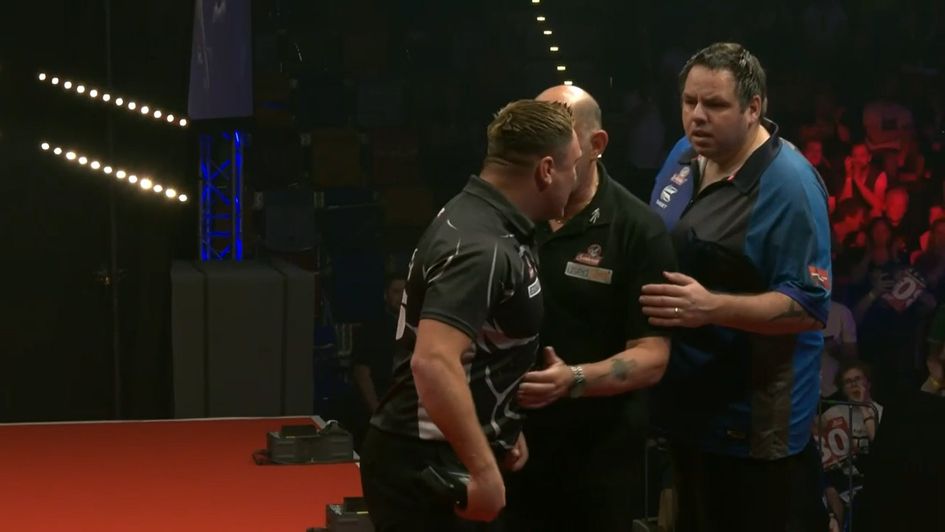 Adrian Lewis and Gerwyn Price had to be separated by Russ Bray after heated row at the end of their clash at the Czech Darts Open.

Price was cruising to victory at 3-1 up but after missing double 12 for a nine-darter, the tide turned and Jackpot staged a superb comeback to win 6-3 and reach the last 16.

Lewis went in for a post-match hug only to be rejected by Price before angry words were exchanged by both players, prompting referee Russ Bray to separate them.

After the match, Lewis said: "I don't know what that was about at the end but he had a go at me for some reason, calling me 'fat something'. He obviously doesn't realise I'm an athlete, that's where he's gone wrong there!"

Lewis faces a tough test in the third round against Vincent van der Voort who also overcame Germany's Martin Schindler in a deciding leg.

😲 Fair to say Gerwyn Price didn't like being hugged by Adrian Lewis...pic.twitter.com/AV6G0Tf1Z5

"I don't know what that was about at the end but he had a go at me for some reason, calling me 'fat something'. He obviously doesn't realise I'm an athlete, that's where he's gone wrong there!"#CDO22 pic.twitter.com/vllh4xqoXZ

Jose Justicia enjoyed his biggest success on the European Tour as he took the scalp of Premier League champion Jonny Clayton with a deciding leg victory.

The tie looked to be a close encounter in the early exchanges, with the pair locked at three legs apiece, but back-to-back legs for the Spaniard saw him go within a leg of the match.

Current Premier League leader Clayton then provided a spirited comeback, taking the tie to a deciding leg, but Justicia held his nerve to secure one of the biggest wins of his career.

Justicia will now face Jose de Sousa in his first ever European Tour third round appearance, with the Portuguese ace showing signs of a return to form, claiming a comfortable 6-2 victory over Martijn Kleermaker.

MVG remains the man to beat

The most recent winner on the European Tour raced into 5-0 lead, before requiring 12 match darts to eventually get over the line.

Czech hopes on the final day will rest on Adam Gawlas, who delighted his home crowd with a 6-4 victory over Damon Heta.

Gawlas will now take on Ryan Searle who didn't allow Ritchie Edhouse a dart at double in their match, closing out a sensational whitewash success with a 107 average.

Ryan Searle with a MASSIVE 107 average there, whitewashing Ritchie Edhouse to complete our third round lineup.

Elsewhere, Rowby-John Rodriguez is through to the last 16 of a European Tour event for the first time in three years, brilliantly defeating Premier League star Michael Smith 6-4.

The World Cup finalist will now take on Dirk van Duijvenbode, who clinched a 6-3 success over Karel Sedlacek.

Dave Chisnall battled back from 4-2 down to defeat Daryl Gurney 6-5 in a thrilling second round tie which saw the St Helens star survive a match dart.

Dave Chisnall battles back from 4-2 down and survives a match dart to beat Daryl Gurney 6-5. Both men averaged around the 103 mark in a terrific tussle!

A repeat of April’s German Darts Grand Prix final saw Humphries once again comfortably come out on top over an emerging Martin Lukeman.

Belgian ace Van den Bergh racked up an eighth consecutive victory over Nathan Aspinall, closing out a hard-fought 6-4 success to set up a clash with the 2022 UK Open runner-up.

Ricky Evans was the first player to seal a third round spot with an impressive whitewash over Krzysztof Ratajski, averaging 103.66 in the process.

The tournament concludes on Sunday, with the afternoon session's third round followed in the evening session by the quarter-finals, semi-finals and final.