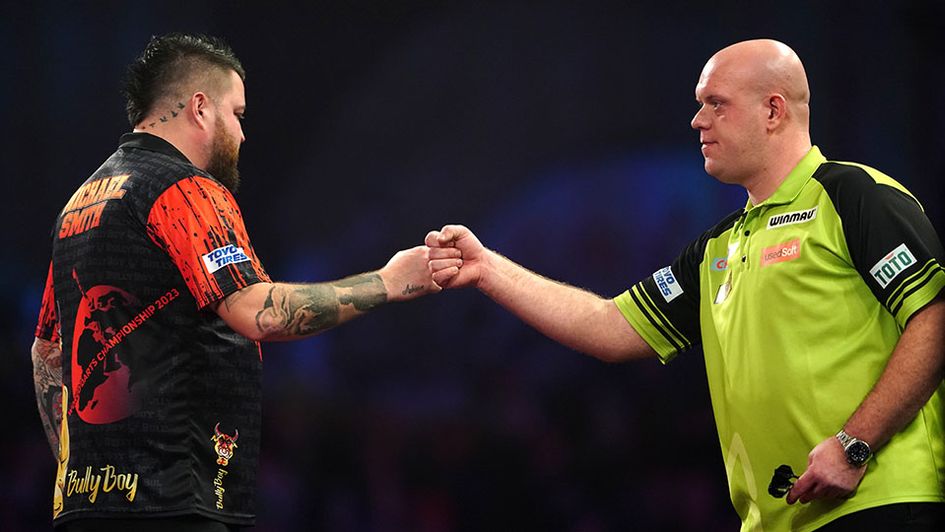 The Nordic Darts Masters takes place this weekend so check out Chris Hammer's preview of the ITV4-televised event.

Hot on the heels of the Bahrain Darts Masters, the PDC World Series tour continues in Copenhagen, where Dimitri Van den Bergh is the defending champion.

MICHAEL VAN GERWEN returns to action after missing last week's event and starts as marginal favourite ahead of man of the moment Michael Smith, who just can't stop collecting trophies after finally opening those floodgates.

Since the start of his maiden-major winning run at the Grand Slam of Darts back in November, the world champion has now won 17 matches out of 18, with the only defeat coming in the short format of the Players Championship Finals when his head was still in a spin after breaking his duck a few days earlier.

I thought the same would happen in Bahrain last week but despite very little practice, he still managed to average in the high 90s for all but one of his games and walk away with his third title in four tournaments.

He averaged in the low 80s against my tip Dimitri Van den Bergh and was there for the taking but the Belgian only managed 96 himself in a scrappy 6-4 defeat and needs to rebuild his confidence which was so high before his defeat to van Gerwen at Alexandra Palace.

MVG deserves to be tournament favourite for exactly the same reasons why he was odds-on to win the World Championship final; his performance levels are consistently higher than everyone else and he'd won way more titles than anyone else in 2022 with 10.

His 99.57 average against Smith was just the fifth time he'd dropped below 100 in his previous 17 matches while his Ally Pally average for the tournament was significantly higher than any of his rivals.

He has a soft opening tie against Andreas Harrysson and will then likely come up against an out-of-sorts Peter Wright in round two, which is a best-of-19 legs and therefore a long enough format to recover if he gets off to a slow start.

Then it's either going to be a World Championship rematch with Smith, where he'll be fired up for revenge - albeit a small measure of it - or Luke Humphries, who still isn't firing on all cylinders since recovering from a recent illness that affected his World Championship performances.

By this stage, a rampant MVG would be hot favourite to beat anyone in the final and make pre-tournament odds of 11/4 look pretty chunky.

Gerwyn Price is favourite to come through the bottom half of the draw following his encouraging run to the Bahrain Darts Masters final, where he beat Jonny Clayton and Rob Cross before a narrow 8-6 defeat to Smith.

His performance levels were generally in the high 90s and even peaked at 101 against Clayton, while his body language was a lot more positive and he seemed to really enjoy the experience after such a morale-crushing World Championship.

However, in this section I'm going to stick with his potential second-round opponent VAN DEN BERGH for the second week running.

I say 'potential' because unlike last week when all the seeds where heavy odds-on shots to beat the regional representatives, he has a very tricky opener against Madars Razma.

This is part of the reason why he's such a big price to go the distance at 16/1 - not to mention the fact he would then face Price followed by either Cross or Clayton, who both produced better performances than he managed last week.

However, what better place for him to rediscover his touch and usual high standards than at the scene of one of his two World Series titles last season, which included one-sided victories over Price (10-5), Smith (11-4) and Gary Anderson (11-5).

As deflating as his 6-0 defeat to MVG was at the Ally Pally, where he only managed to win four legs, it was still a history-making run for the Belgian and if he can draw on the many positives then I wouldn't be surprised to see him bounce back at a happy hunting ground and giving himself a chance of delivering another one of his 'humble' speeches.