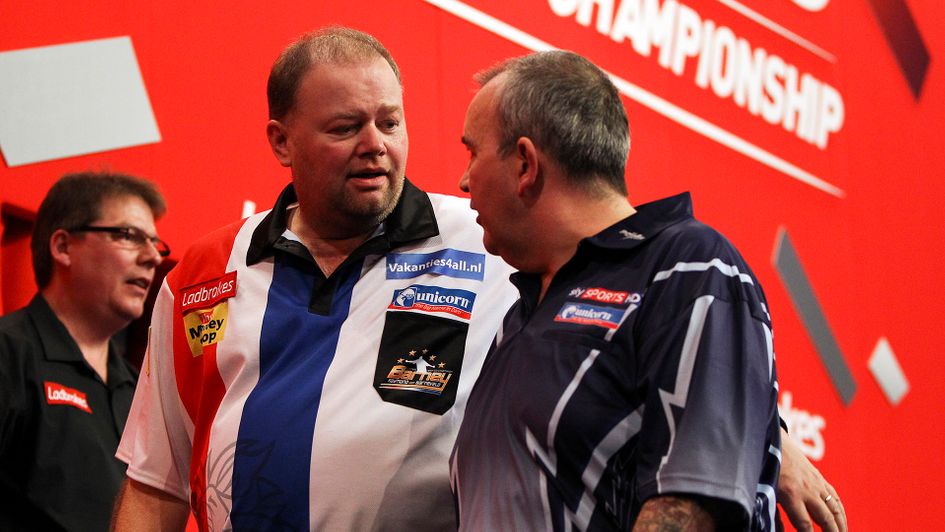 Paul Nicholson looks back on three of the greatest rivalries in darts history during his latest series of columns.

This incredible rivalry began around the same time as the early years of the World Championship in the late 1970s, when Eric Bristow and John Lowe vied for supremacy along with the likes of Leighton Rees, Alan Evans and Bobby George.

Eric’s rivalry with Bobby was also a huge one because of the polarising nature of the audience, but back in the 1980s I remember people being either a ‘John Lowe person’ or an ‘Eric Bristow person’. There was nothing inbetween and you could never switch.

It’s fair to say they didn’t get along and who could forget the frostiness after the 1987 World final when it was pretty much shake hands and get out of there for Eric. He did not like losing to John and although Old Stoneface never showed any emotion, inside he’d have been brimming with lava because he would have enjoyed that game more than any other.

Everyone knew John and Eric were the best two players in the world during the 1980s – even though Jockey Wilson, Keith Deller and Bob Anderson did win world titles – but they played the game very differently.

John – nicknamed Old Stoneface – played the game, shook hands, did an interview and left. He was old school.

Whereas Eric was flamboyant and brought in this new brash way of entertaining fans. John wasn’t about entertainment – he was about money and titles.

John didn’t enjoy Eric’s exuberance and Eric didn’t enjoy that John didn’t have any! There was nothing for him to bounce off. A great rival has to almost be your antithesis, and this couldn’t be truer for Eric and John.

Although Eric was very popular, John had his fair share of supporters and it was a pretty even split in my opinion.

Eric won two World Championship finals against John in 1981 and 1985 but his finest hour in the rivalry was arguably the 1984 semi-final when he thrashed him 6-0 before steamrolling Dave Whitcombe 7-1 with an average of almost 98. This was the peak of Eric’s powers and the standard he was producing was almost unheard of back then.

He averaged over 90 in all his five matches that year, won 24 sets and dropped just the one!

John finally got his moment over Eric in the 1987 final having been put through the mill for five years and that must have felt so good – almost like Peter Wright beating Michael van Gerwen in the 2020 final.

He handled being the underdog very well and stopped Eric’s run of three successive world titles – but who would have thought only John would win another out of the pair of them?

This rivalry was very different to Bristow and Lowe because they were, of course, separated from each other for so many years in two different organisations.

In the post-split era during the 90s, there was only one big rivalry in the PDC and that was Phil Taylor v Dennis Priestley whereas in the BDO system there were so many high quality players of similar levels vying for supremacy.

By the time Raymond van Barneveld’s period of dominance began in the later 1990s, he didn’t have one major rival – it was a cluster of players trying to take him out like Martin Adam’s, Chris Mason, Mervyn King, Ted Hankey, Tony David, John Walton and many others.

They all had a crack but between 1998 and 2006, Raymond was the best player by some distance.

It was only a matter of time before Taylor and Barney had to go head-to-head in the PDC and when it finally happened, the rivalry would last a good 10 years of high drama.

They had previously met in a ‘Champion of Champions’ event on Sky, which Taylor won, but apart from a few minor co-sanctioned events, they didn’t clash again until the massive UK Open showdown of 2006 after Barney made the switch to the PDC.

Match of The Century 1999: Phil Taylor vs Raymond van Barneveld

We saw so many wonderful matches between the pair in that time because they simply were the two top dogs in the sport who’d enjoyed so many years of dominance.

It was amazing to see this new rivalry live up to the hype and for a player to push Taylor in the way darts – and indeed the Power himself – needed.

We’d been watching Taylor wipe the floor with many opponents to nil – even in World Championship finals – and that wasn’t good for the sport long term. All sports need the main figurehead to be challenged such as how Rafael Nadal took it to Roger Federer before Novak Djokovic came along.

The likes of Colin Lloyd, John Part, Rod Harrington and Peter Manley could beat him on their day but struggled to push him on a regular basis.

The world championship had become predictable but that all changed in the 2007 edition when Barney produced the performance of a generation to take darts to another level – let alone his own career.

He exposed that tiny bit of fragility in Phil’s game and from that moment on we only really talked about Barney v Taylor in terms of rivalries.

Even the many matches Taylor won tended to be very close and compelling, such as the World Matchplay final of 2010, and all of Barney’s triumphs bordered on epics.

There’s no question Taylor needed Barney’s arrival to help him reach a new level of mind-blowing brilliance and statistics.

His tournament averages from around 2009 for a few seasons would regularly be around 105, which is more frightening the more you think about it, and this underlines how much he was the type of player who thrived when learning from defeats.

He once said – and I take this as a huge compliment – that the Premier League season after losing to me in the Players Championship Finals he would ‘smash them all’ because he learned from that defeat. ‘When I lost to him, it really opened my eyes,” he said. And what did he go and do in 2010? He had the two nine-darter game! He blew everybody away and reached a standard that people could only dream about.

Whenever he got knocked down throughout his career, he’d always come back stronger than ever. He was the king of bouncebackability, so it was no surprise to see him win his farewell World Matchplay just when everyone had written off his chances of winning another major.

He would have signed off in perfect style at the World Championship had it not been for Rob Cross producing a performance of the ages against him.

Barney kept Phil sharp for such a long time because he always had to be ready for the Dutchman’s threat.

We all know what Barney’s greatest moment against Phil was, but what about vice versa? Judging from his celebrations, it was probably the 6-4 victory in the 2013 World Championship semi-final prior to his triumph over Michael van Gerwen.

Taylor had already missed match darts by the time he had another chance at double 16 and you could see his hand shaking. He couldn’t wait to get rid of it and when it hit, it was pure relief. He was genuinely nervous and that’s a rare sight.

You could easily say the final when he averaged 110 was his favourite win over Barney but I have a sneaky suspicion it was that semi-final.

They were all undeniably great to watch for however long they lasted but I think MVG’s rival-in-chief has to go down as Peter Wright when you consider how many times they’ve played and how many of those have been in major finals.

There’s been no head-to-head in history that has been played so many times.

If you’d spoke to me four years ago then this rivalry wouldn’t be on my list. I’d be saying MVG owns Peter Wright and has a permanent place for him in his pocket.

But the rivalry began to change as soon as Snakebite became a major winner at the 2017 UK Open, when he beat Gerwyn Price in the final, because there was a lot written about the fact he only managed it because MVG wasn’t there.

Peter realised how important it was to go on and win tournaments that Michael was in – and preferably beating him along the way.

He’d lost all nine previous finals that he’d faced MVG in by that point in 2017 – including some non-televised events – so from then on, his career purpose was to put that right.

Peter used MVG as his motivation and although he’d suffer more final agony against him in four more big televised events (2017 Premier League, 2017 Grand Slam of Darts, 2018 World Grand Prix, 2019 Champions League), he’d eventually triumph in the biggest of them all on New Year’s Day 2020.

Wright had claimed numerous times during that World Championship run that he wanted to face MVG in the final – he didn’t want anyone else to do the dirty work and make it easier for him. It was genuinely the dream final he wanted.

Almost two years on, I’m not sure MVG is looking at Peter in the same way but he might be starting to think the roles have reversed in terms of who is the better player right now. He should use Peter as either motivation or the person to get him really riled up to produce that A game.

It’s not just the amount of games that makes this rivalry so fascinating but it’s the quality from both players and the variety of results we are getting now.

Peter obviously crushed him in the World Matchplay semi-finals recently and even as far back as 2017, Snakebite still managed to whitewash MVG 6-0 in a European Tour final! We’ve had dominance from both and classics in the middle.

And they’re not even finished! That’s the best thing about this rivalry – there are so many more editions to come!

I really think they will meet in one more World Championship final which would almost feel like a decider of an Ally Pally trilogy.